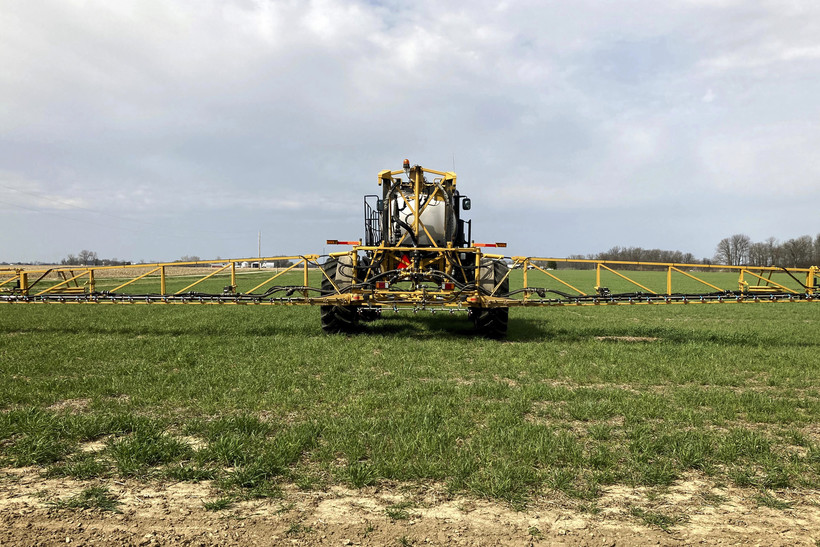 Farmer Rick Clifton drives a spray tractor across one of his fields, applying herbicide to cover crops that occupied the ground during fall and winter in Orient, Ohio, on April 5, 2021. Clifton grows cereal rye and rapeseed to prevent erosion and make the ground healthier for his corn, soybean and wheat cash crops. Cover crops store carbon in the soil, keeping the greenhouse gas out of the atmosphere. John Flesher/AP Photo

Much of southern and western Wisconsin has continued to experience abnormally dry conditions this year, with far southeastern Wisconsin seeing severe drought earlier this summer.

But agronomist Chris Kucharik from the University of Wisconsin-Madison said lower precipitation hasn’t had as much of an impact on the state’s crops as he was anticipating.

"I'm a bit surprised at how well the crops have been doing," Kucharik said. "Honestly, once the crop is in the ground, (farmers) are kind of at the mercy of what happens during the growing season with the weather."

The latest crop progress data shows farmers are reporting 75 percent of the state’s corn crop and 72 percent of soybeans are in good to excellent condition.

Kucharik said timely rains have helped crops stave off the effects of drought this summer. But he thinks a growing number of farmers in southern Wisconsin are starting to prepare for extreme weather conditions like drought.

Kucharik said he’s been hearing about more farms in his area installing irrigation systems. That’s unusual given the fact that southern Wisconsin has previously had a climate well-suited for growing crops.

"We're starting to see more applications for high capacity wells to support agricultural production in (areas outside the Central Sands region), I think, partly because of the risk involved with longer, more significant droughts," Kurcharik said. "Farmers can probably withstand, economically, a significant drought once every 10,15, 20 years. But if it's happening every other year or even every third or fourth year and crops are devastated, that's not usually something they're going to be able to recover or stay afloat with."

Drought is just one of the weather extremes that are expected to happen with greater frequency and intensity as climate change progresses. Just two years ago, Wisconsin experienced the wettest year on record after several consecutive years of wetter than normal seasons.

Jessica Hellmann, director of the University of Minnesota’s Institute on the Environment, said these events stem in part from the way a warmer world intensifies the water cycle, from water evaporating more quickly from the earth's surface to it returning more intensely in a storm.

"These extreme events, they're not coming in just one direction. It's not just increased heat. It's not just spring rainfall. It's not just drought. It’s the possibility of any one of those things," Hellmann said. "So that means farmers need to be thinking about both irrigation and about excess water on the field. That's a lot to ask all at the same time."

She said these challenges come as farmers also face increased pressure from consumers to reduce their impact on the environment through more sustainable farming practices or a reduction of carbon emissions.

Hellmann said it will take continued innovation in agricultural technology and practices to keep up with the demands of a warming world.

"We all might have to pay a bit more (for food) to have a better environment down the road," Kucharik said. "It's really important that we think a bit differently about prioritizing incentives that not only help improve the production standpoint on the farm, but helps profitability at the farm, more resilience to climate change, promotes ecosystem health. And to this point, we just haven't had integrated policy or programs that are hitting on all cylinders."

He hopes the repeated shocks to agriculture seen over the last decade, from extremely wet weather to this year’s drought and even the COVID-19 pandemic, may be the wake up call that is needed for both farmers and people outside of agriculture to realize how vulnerable the food system is to disruption.