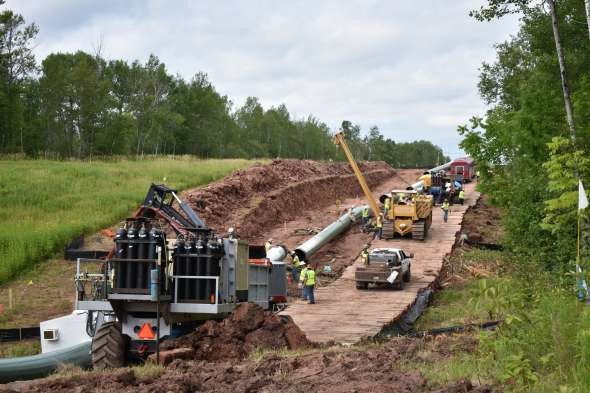 Alexander Good-Cane-Milk and Kyla Hassig were found guilty on Aug. 13, 2018, of trespassing onto Enbridge's Line 3 construction site near County Road W during a protest on Aug. 29, 2017.

Alexander Emery Good-Cane-Milk, 24, of Nemo, South Dakota, and Kyla L. Hassig, 26, of Cloquet, Minnesota, were also found guilty of trespassing on the site where Enbridge was working to replace a 12.5-mile segment of its aging 1960s-era oil pipeline in Wisconsin.

"I don’t feel justice was served today," Hassig said after the verdicts were read and before she was sentenced.

Hassig went on to say that she would gladly accept the consequences for her actions because she felt Line 3 is an "imminent danger" to people.

"I can’t make anyone understand that, but I understand it," she said.

On Aug. 29, 2017, Good-Cane-Milk secured himself to an excavator at Enbridge’s construction site while Hassig streamed the protest live on social media. Both he and Hassig refused the requests of Douglas County Sheriff’s Office deputies to leave the site.

Line 3 currently transports around 390,000 barrels of oil per day from Alberta, Canada, to the Enbridge terminal in Superior. Enbridge is spending around $2.9 billion in the United States to replace the aging pipeline. The company has argued the 1,031-mile replacement pipeline is necessary due to corrosion and cracking within the existing Line 3.

During the one-day trial, attorneys for Hassig and Good-Cane-Milk argued their clients weren’t acting out of self-interest, but out of concern for the environment and others.

"Even though they had done, under ordinary circumstances, may have done criminal conduct, that given the reasons and the urgency and the exigency of stopping climate change and particularly the pipeline was, in effect an act of civil disobedience (that) would allow them to defend others," said attorney John Bachman.

Douglas County District Attorney Mark Fruehauf said he believed the two engaged in conduct to bring awareness to their cause.

"Compared to many cases I handle in the courtroom, their motives could be considered noble. They’re doing this because they think they’re protecting the environment and they’re saving the planet, basically. I guess my response to that is maybe this will lead to change with the law. I don’t know," said Fruehauf. "But, the act of committing a crime in furtherance of your cause — it’s a still a crime whether you’re a good person or a bad person or your motives are pure or not."

Douglas County Judge Kelly Thimm sentenced Hassig to serve 20 days in jail beginning immediately for obstructing an officer. During sentencing, the judge said he wouldn’t have considered jail time if Hassig had complied with deputies requests instead of requiring force to remove her from the construction site. He said her actions endangered Hassig and officers, noting jail time was necessary to show her "this type of behavior will not be tolerated."

The judge also ordered Hassig to pay fines in the amount of $100 each for trespassing and disorderly conduct.

Good-Cane-Milk is set to appear back in court for sentencing and restitution in the next couple weeks.

Enbridge has since completed construction of its Line 3 replacement project in Superior and the pipeline is now in service in Wisconsin.