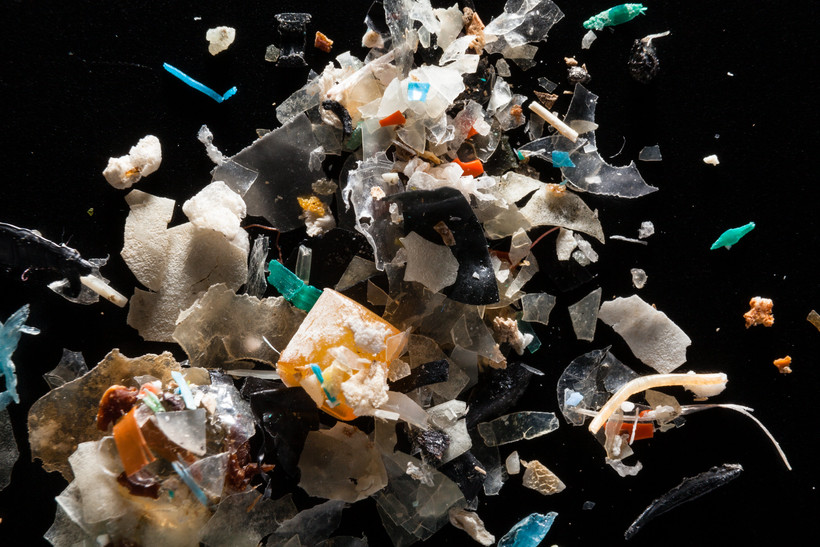 Microplastics from the Rhode River are pictured at the laboratory of Dr. Lance Yonkos in the Department of Environmental Science & Technology at the University of Maryland in College Park, Md., on Feb. 6, 2015. Will Parson/Chesapeake Bay Program (CC BY-NC)

UW-La Crosse Study Finds Up To 11 Pieces Of Plastic Per Cubic Meter Of Water
By Hope Kirwan
Share:

Ongoing research at the University of Wisconsin-La Crosse finds microplastics could be an unseen problem in the upper Mississippi River.

Courtney Baker is a UW-La Crosse graduate student in aquatic sciences. Her study collected surface water samples at three different locations on the Mississippi River to look for different kinds of plastic contamination.

Previous studies have documented microplastics in the Great Lakes and its tributaries. But Baker said the prevalence of plastic contamination in the Mississippi River is unknown.

"We’re still trying to get the big plastic out of the river that we can see. So this whole idea that there’s smaller plastic that we can’t even see is something that hasn't even been an idea to most people in the past few years," Baker said.

Microplastics are defined by their size, encompassing any plastic material that is 5.6 mm to 0.3 mm. Baker said the contaminant usually is a breakdown of larger plastic items, from water bottles to clothing made out of synthetic material.

"Anything stretchy, your stretchy athletic leggings, all of that gives off these plastic fibers when you wash your clothes and that goes straight down the drain," Baker said.

These fibers were the most common type of microplastics that Baker found in the Mississippi River near La Crosse. She said she was surprised not to find more plastic microbeads that are common in hand sanitizers or face scrubs.

"We know they’re out there, we just have to find them. So we’re starting to think that they are settling out of the water column into the sediment (at the river bottom)," Baker said.

She’s hoping to test that hypothesis in her next study by measuring microplastics at different depths of the river, as well as in areas with different rates of water flow.

"We just need to get a general idea of how these microplastics act," Baker said. "In order to start looking at how we can fix the problem or considering things like that, we need to get a good idea of how it acts in all parts of the water."

Previous studies have found microplastics in tap water and even beer made in the Great Lakes region. And Baker said researchers have found these contaminants can also work into tissues of fish or other animals commonly hunted on the Mississippi River.

"We can't see (microplastics) usually, so the risk of ingestion is quite high because it's not something you can just pick out of your meal or out of your water," Baker said.

A World Health Organization study published last month found microplastics are widely found in water and food, but there's not enough evidence to conclude that the contamination poses a risk to public health.

But Baker said she still feels the contamination is an area of concern, especially considering the number of chemicals used in the production of plastic materials.

"It's not just BPA, there are tons of other chemicals and toxicants that are associated with plastics," Baker said. "As the microplastics break down, these chemicals have a strong possibility of being released into the environment or into you."

Baker said she hopes to work with state and federal agencies that manage the Mississippi River to gain a better understanding of the scope of microplastic contamination.