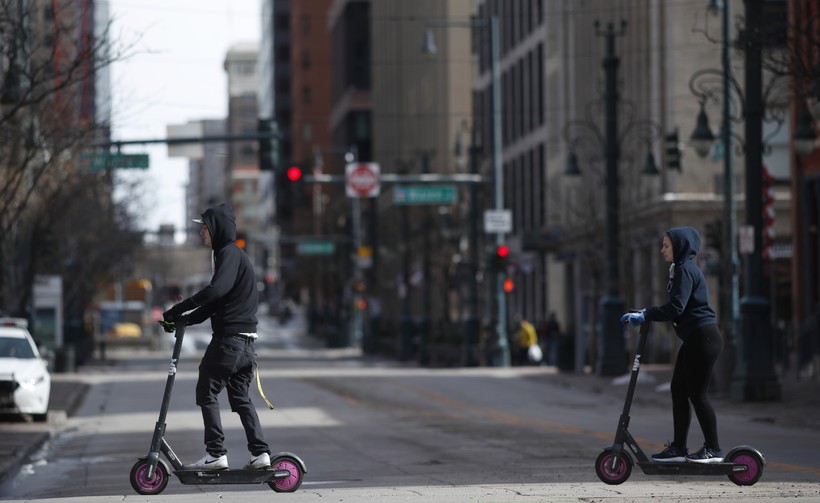 Riders of electric scooters head across the deserted 16th Street Mall as residents deal with the spread of coronavirus, Saturday, March 21, 2020, in Denver. David Zalubowski/AP Photo

After getting off to a rough start, it could be the summer of the electric scooter in Wisconsin.

A hundred Bird scooters first appeared on Milwaukee sidewalks in 2018, and local officials weren’t happy about it. But a year later, Gov. Tony Evers signed legislation regulating electric scooters across state, and they returned to Milwaukee in 2019.

A pilot featuring about 50 Bird scooters launched Friday in Appleton, the hometown of the company’s founder, Travis VanderZanden.

"It is neat to welcome back a now very successful startup founder and his enterprise to our city," said Appleton Mayor Jake Woodford.

In a statement, VanderZanden said he's honored to bring Bird to the Fox Valley.

"I understand the importance and need for Appleton residents to have alternative ways to get around the city and look forward to seeing friends and family in Appleton riding Birds to local restaurants, cafes, classes or to work," he said.

VanderZanden’s mother was a bus driver with Valley Transit in Appleton, Woodford said.

"He's shared that perspective, seeing how people move around cities and the challenges that they face in moving around cities, was a part of his inspiration for getting into the transportation space," he said.

That’s one of the things officials will be looking into during the pilot, which was approved by the city’s Common Council earlier this month.

"That will be part of the pilot, too, is just understanding what role these actually play in the transportation ecosystem. Is it purely visitors and tourists, sort of novelty thing, or does it serve a practical purpose," Woodford said. "That'll be something we're looking at as we evaluate."

The city has already heard from citizens who are both concerned and excited about the pilot, and he said public feedback will play an important role in determining whether scooters are here to stay in Appleton.

Earlier this month, Bird scooters arrived in Wauwatosa, where they’re also part of a pilot program. The city board approved the program on the recommendation of director of public works David Simpson.

"A program such as this will go a long way toward helping solve the last mile problem with public transportation and will likely help increase public transportation ridership, which will ultimately reduce the pressure on Wauwatosa roadways. It is also my hope that this program will increase patronage of local businesses because patrons can get to them in a more convenient fashion," he wrote in a memo to the board.

Riders use an app to locate and pay for the scooters. Users must be at least 18, and in Wauwatosa, they’re designated for use in bike lines, roads and multi-use paths, according to a local media report.

There are no official plans to bring scooters to Sheboygan, but the city’s Common Council recently paved the way for electric scooters by unanimously approving a set of rules for their use. When the Sheboygan Press polled readers on electric scooters, 57 percent favored bringing them to the city.

Meanwhile, in Milwaukee, which has had a shaky relationship with electric scooters in the past, they’re likely to make a return this summer.

In 2019, three scooter companies participated in a local pilot program, which elicited more than 100 complaints from residents. Still, the city’s Department of Public Works observed that — as intended — more than 80 percent of users drove on roadways, rather than sidewalks. The Milwaukee Police Department reported six crashes between cars and scooters. Over the course of more than 350,000 rides during the pilot, users reported 67 total scooter crashes, most without injuries.