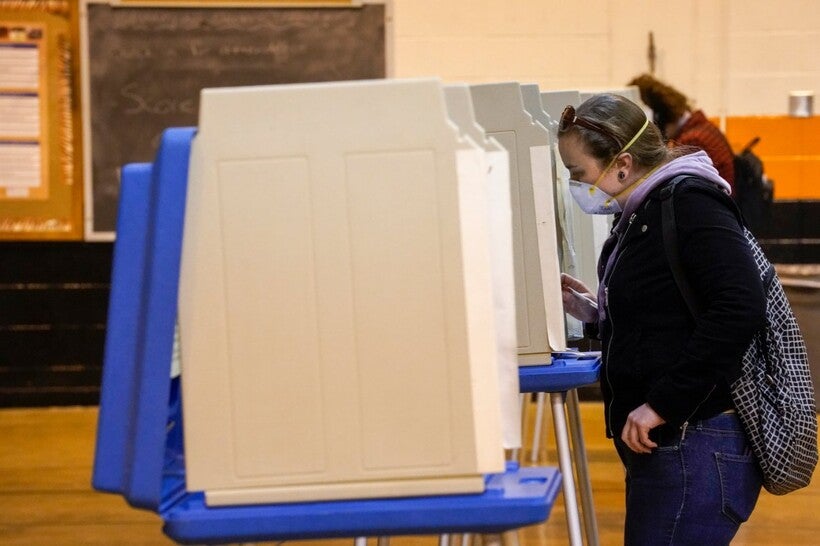 People vote at Riverside High School for Wisconsin's primary election Tuesday, April 7, 2020, in Milwaukee. The new coronavirus causes mild or moderate symptoms for most people, but for some, especially older adults and people with existing health problems, it can cause more severe illness or death. Morry Gash/AP Photo

The state Elections Commission has delayed a final vote on a plan that would send absentee ballot request forms to millions of Wisconsin voters, with the Republican chair of the panel saying he wanted to narrow that list.

The move came on the same day that President Donald Trump tweeted threats to other states that had encouraged absentee voting, and just hours after the Republican leader of the Wisconsin Senate came out against the plan.

The proposal was developed by staff at the Wisconsin Elections Commission to prepare for another potential surge in absentee voting this fall amid the COVID-19 pandemic. A record number of Wisconsin residents voted absentee in the April election with 62 percent of all people voting by mail. Turnout for the November election is expected to double.

It would be paid for by federal funding set aside for elections in the $2 trillion federal coronavirus relief plan Trump signed in late March.

Knudson said there was no reason for the state to send absentee ballot request forms to voters who already have a photo ID on file. According to commission staff, that group includes nearly 1.1 million voters.

"I mean they've voted absentee before," Knudon said. "They know how to do it. I don't see why we need to spend money to send them a paper request for something they've done before."

The state's voter ID law requires people to produce a copy of their photo ID for voting, whether in-person or when requesting a ballot by mail.

Knudson also recommended against sending absentee ballots to voters in municipalities like Milwaukee, which are planning to send absentee ballot request forms on their own.

"To me, I don't see how then it makes sense for us to duplicate that," Knudson said. "I would exclude those people as well."

At the same time, Knudson wanted to increase state funding for local clerks and give them more leeway on how to spend it.

Mark Thomsen, a Democratic appointee, wanted to know more about Knudson's proposal before he voted on it.

"I really don't want to wing it with this kind of money," Thomsen said. "I may actually vote with you in a week from now, but I’m voting 'no' today because this is silliness."

Thomsen and other Democratic commissioners supported the original plan proposed by Wisconsin Election Commission staff, but that proposal failed on a 3-3 vote Wednesday night.

Thomsen said the experience of the April election showed the state needed to be more proactive getting people to vote absentee and vote earlier.

In April, U.S. District Court Judge William Conley ordered the state to extend its deadline for counting absentee ballots from election night to nearly a week later. A report released this week by the Wisconsin Elections Commission showed that step resulted in 79,054 additional ballots being counted.

"If we would have followed the law as written, we would have disenfranchised 79,000 people," Thomsen said. "We would have had a disaster if we wouldn't have had timely intervention from a federal court to save us from our own sins."

While Republicans left the door open to mailing some number of absentee ballot request forms, Knudson and fellow Republican appointee Bob Spindell spoke Wednesday about the importance of in-person voting.

Spindell said there was no way to know what the situation would be with COVID-19 come November.

"It appears things are getting better," said Spindell, speaking on a day when Wisconsin saw an increase in the number and percentage of positive COVID-19 cases. "I think we should be also instead of encouraging everybody to sign up for absentee ballots ... is to get back and encourage people to go to the polling places."

Spindell was appointed to the commission by Senate Majority Leader Scott Fitzgerald, R-Juneau, who issued a statement ahead of Wednesday's meeting saying he opposed the plan.

"Wisconsin has online registration, excuse-free absentee voting, early in-person voting, and Election Day registration, making it easier to vote in Wisconsin than most other states," Fitzgerald said. "I urge the Commissioners to reject the proposal in its current form."

On Wednesday morning, Trump attacked a similar moves in Michigan and Nevada, threatening to withhold federal funding from those states.

Other Republicans have been more open to the idea.

In an interview with WPR on May 4, Mark Jefferson, executive director of the Republican Party of Wisconsin, said if Madison and Milwaukee were sending absentee ballot applications to voters, clerks in smaller municipalities should consider doing the same.

Jefferson was not commenting on the plan considered Wednesday by the Elections Commission.

Knudson indicated Wednesday the Commission could reconvene Wednesday, May 27 to reconsider the absentee ballot proposal.

Commissioners did approve one item Wednesday night that would spend roughly $500,000 in federal coronavirus funding on supplies like hand sanitizer for the November election and the August primary. That measure received a unanimous vote.