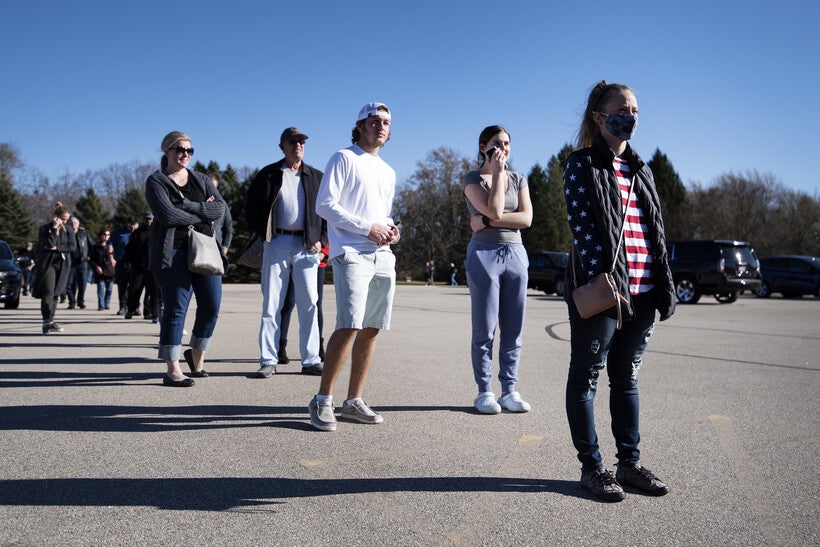 'Election clerks in Wisconsin are people that you know': Coalition of municipalities works to restore faith in the election process

PSA from local officials will be aired through Election Day
By Diane Bezucha
Share:

As voters head to the polls Tuesday, some state and national politicians continue to push unfounded allegations of widespread election fraud. But a coalition of Wisconsin municipalities is working to restore faith in the state’s election process.

"If you don't have faith in elections, you don't have democracy," Jerry Deschane, executive director of the League of Wisconsin Municipalities, said.

Amidst the ongoing debate about election policies and procedures, Deschane said they simply wanted to remind people that elections are a transparent process run by people you know.

"These are neighbors. These are relatives. Election clerks in Wisconsin are people that you know, and that oughta restore your trust. You can trust these people. You know who they are. You know where they live," Deschane said.

"I felt it was important to do what we could to get the trust back to the people for elections," Riley said. "Our poll workers and municipal clerks give it their all and are always doing their best to make sure everything is accurate and true."

And Skerke said she participated for the same reason.

"We trust our elections, because we trust those that are running them. They put a lot of time into it. And I think they take their jobs very seriously," Skerke said. "They're doing it because they just want to make sure people who are eligible to vote and wish to vote have that opportunity and to make sure it's run correctly."

Pushed to the brink

Despite the nonpartisan nature of the message, Deschane said finding clerks willing to speak publicly for the PSA was challenging.

By definition, municipal clerks are nonpartisan, often appointed rather than elected. Their main responsibilities include keeping records and running elections, not making policy.

"Clerks are neutral in policymaking. They view themselves that way. They take tremendous professional pride in that. They're not taking positions on things. Frankly, that's one of the reasons why we ought to be able to trust them," Deschane said.

But over the past two years, Wisconsin’s municipal clerks have been pulled into the center of the elections debate, facing increased scrutiny and harassment since the 2020 presidential election.

"I definitely think there's a level of just mental exhaustion from clerks," said Sarah Bruckman, president of the Wisconsin Municipal Clerks Association and deputy clerk treasurer for the village of Fox Point.

Bruckman said managing elections is just one aspect of a municipal clerk’s job, but they are spending so much time defending themselves against false claims of widespread voter fraud that they’re burned out.

While many municipal clerks have been pushed far enough to leave the profession altogether, Skerke is not one of them.

"We've taken our oath to run these elections and to do it correctly," Skerke said. "So it's sort of disheartening to have those opinions out there about it. But I'm not walking away from it. I'm not ready to give that up."

In fact, Election Day is one of Skerke’s favorite days of the year.

"I really love election day itself," she said. "There's so much energy around it. It's such a great opportunity to see our voters…here at the town hall."

And for voters who may have concerns about elections, Bruckman said volunteering to be a poll worker is one of the best ways to learn about the process.

"It's very eye-opening just to see all the details that it entails when voters just show up and…sign their book and get their ballot and vote," Bruckman said. "And it's a great way to meet your neighbors."

Bruckman said people can serve as poll observers at any location, as long as they check in with the site’s chief inspector. And she encouraged residents to contact their local clerk to find how they can get involved before, during and after Election Day.

Deschane agreed education is a big part of building trust.

"We need to demystify the backroom part of the election," he said. "It's not a secret, but a lot of people don't know…how the mechanics of an election works."

That’s why the new coalition wants to continue developing materials that will provide voters with a nonpartisan overview of the electoral process. Deschane said he envisions something like the Schoolhouse Rock classic "I’m Just a Bill" for Wisconsin elections.

"This process isn't a secret and I think if we can demystify it for people, it will help restore people's confidence in it," Deschane said.

Polls are open from 7 a.m. to 8 p.m. Tuesday. You can find your polling location here.