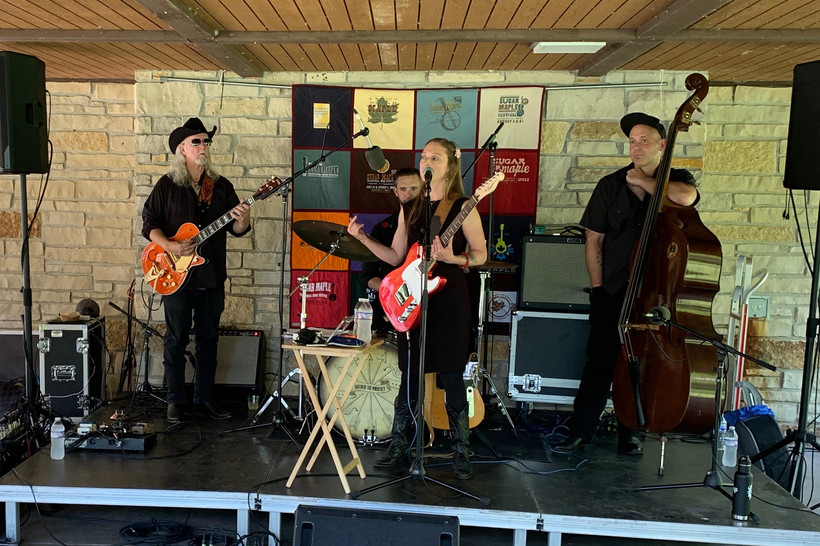 Eilen Jewell and her band at the 2019 Sugar Maple Festival. WPR

Eilen Jewell Likes To Go To The Source

Americana Musician Shared Her Music And Inspirations At The 2019 Sugar Maple Festival
By Dan Robinson
Share:

When so often the latest thing is considered the greatest thing, Eilen Jewell prefers her music with the word "early" in front of it.

"I feel like early examples of genres ... they still know who they are," Jewell said.

Jewell and her band appeared recently at the 2019 Sugar Maple Festival in Madison where she talked about her music and performed a few songs. Her time at the festival came just a couple of weeks before the release of her latest album, "Gypsy," which arrived on shelves and online Aug. 16.

The album, like Jewell’s music in general, is a wonderful mix of song styles and influences. Her sound has been described as country, rockabilly, blues, folk and rock, and all those genres are reflected on the album. Her music, Jewell commented, is "a mix of almost every type of music with early in front of it. I'm influenced by early blues, early country, early jazz, early rock 'n' roll. That's the zone that I grew up listening to. That's my musical zone and that still influences me today."

The album starts off with the song "Crawl," which has echoes of Creedence Clearwater Revival. The title track, "Gypsy," sounds slightly more folky than the rest of the album, with some mandolin mixed in. And the song, "Beat the Drum" brings out the band’s rock side.

All the tracks on the album are written by Jewell, except one, the classic-country tinged "You Cared Enough to Lie." Jewell said she included it as the only cover song on the disc because she really wanted it to stand out.

"It has a special place in the album for me because the man who wrote that song is named Pinto Bennett and I really love his music. I feel like more people need to know about him," she said. "He’s an Idahoan like myself, and his star was rising but then, I don’t know what happened. He just never really got the credit that I think he deserves … He’s a really great songwriter, especially in that classic country way. He can make you laugh and break your heart at the turn of a dime."

For Jewell, the early and long-time musicians are the source, and that’s where she directly goes for inspiration.

“I think it’s a little bit silly of me,” she added with a grin, “because here I am doing blues songs and expecting people to listen. I'm not Robert Johnson. But that's just how it goes.”

Click on the link above to hear the entire interview and performance by Eilen Jewell and her band at the 2019 Sugar Maple Music Festival.