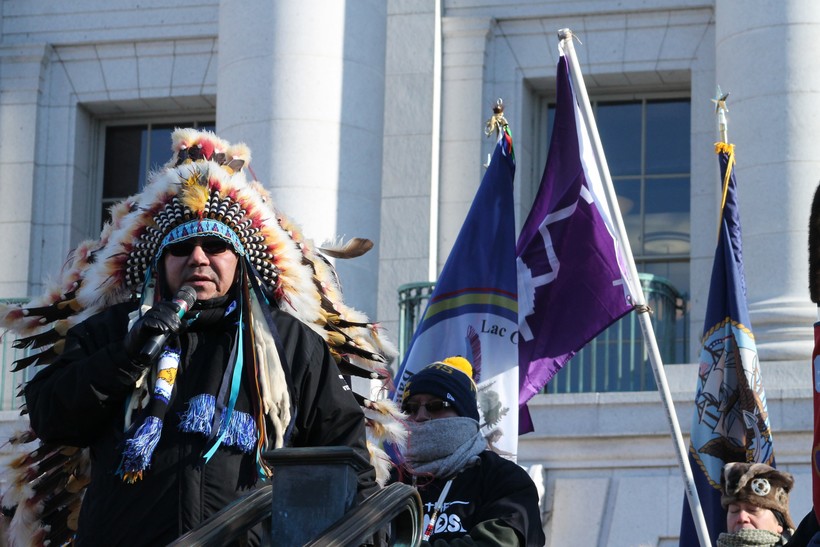 Assembly Speaker Robin Vos said Tuesday that after speaking to members of the state's Native American tribes, he thinks it's unlikely that a bill allowing property owners to excavate effigy mounds on their land would be put up for a vote this spring.

His remarks came as hundreds of people from all 11 of Wisconsin’s Indian nations gathered at the state Capitol Tuesday, in spite of freezing temperatures, to speak out against the controversial Wisconsin Landowner Rights Act.

Current law defines a burial site as any place where human remains are buried. Under the Republican bill, if no human remains were to be found as a result of an excavation, a property owner would be able to use the land freely.

Ho-Chunk nation tribal Chief Clayton Winneshiek said that he sees Vos's statement as a small victory, although he thinks the bill will eventually "be brought back in a different manner." He stressed that the state's tribes are prepared to take on the state government again if the bill is reintroduced.

Bob Shea is the owner of Wingra Stone & Redi-Mix, a construction and concrete company that has long pushed for the right to dig up burial mounds located on a privately owned quarry outside Madison.

"There is a lot of rock there that could be accessed should there not be remains. It's highly marketable," he said.

Later in the evening, a coalition of bill opponents gathered next to a snow-covered burial mound in Milwaukee to dance, recite poetry and sing. Event organizer Margaret Noodin, who heads a University of Wisconsin-Milwaukee institute for American Indian Education, said glad to hear Vos's promise.

"I'm just thrilled that all over the state today — and I think in several places in the nation — people really thought about the legacy we have in these mounds," said Noodin.