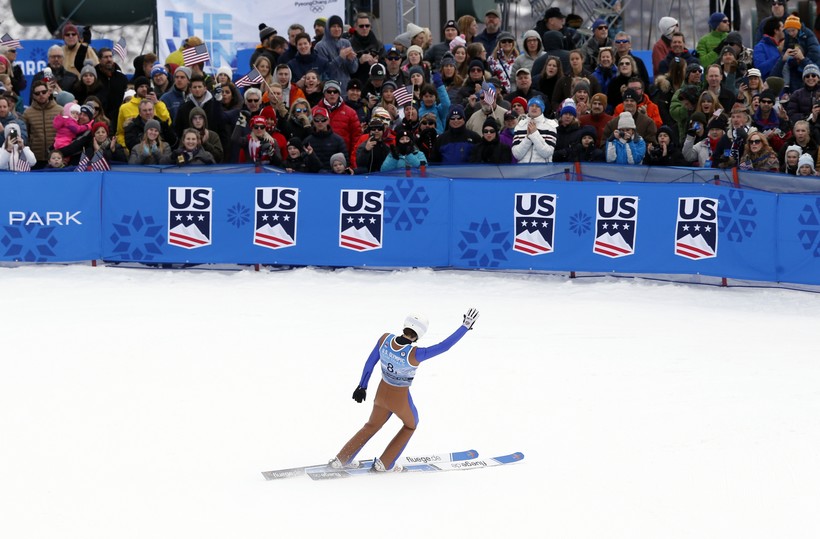 Ben Loomis looks on after competing in the ski jumping portion of the Nordic Combined at the U.S. Olympic Team Trials, Saturday, Dec. 30, 2017, in Park City, Utah. Rick Bowmer/AP Photo

Brothers Ben and Adam Loomis have been skiing since they were toddlers. Their family first strapped them into their skis while they were growing up in Eau Claire.

Now, the siblings are two of the best Nordic skiers in the world, with one of them, Ben, participating in Nordic combined in the 2018 Winter Olympics. In the Olympic Winter Games, ski jumping is up first.

Athletes are judged on their distance and style. Whoever has the best jump, gets to line up at the front of the starting line for the 10-kilometer cross-country race. Each competitor is staggered after the leader depending on how well they did in the jump. The first person to cross the finish line in the race, wins the gold.

The sport has Norwegian roots dating back to the late 1800s. Nordic combined was the main event at the Holmenkollen Ski Festival in 1892, which grew in popularity and attracted skiers from nearby countries. Norway’s King Olav V even competed in the 1920s, according to the International Olympic Committee.

The first Winter Olympic Games in 1924 in Chamonix, France, featured Nordic combined. According to NBC, it’s one of six sports that have been featured in every Winter Olympics, along with figure skating, ice hockey, cross-country skiing, ski jumping and speed skating. One member of Team USA carrying on the sport’s tradition is 19-year-old Ben. Ben was born and raised in Eau Claire.

"My family’s always been into Nordic skiing," said Ben by phone from Switzerland. "My dad picked it up, and my brother and I both started when we were really young. When we were about 2 to 4 years old, we first started walking around on skis."

His brother, Adam, got really into Nordic combined after watching it during the 2002 Olympics in Salt Lake City, Utah.

"He had already been a cross-country skier and he thought it'd be cool if he could learn ski jumping, also," said Ben. "It turns out we had a local jump in our town, the Flying Eagles Ski Club right in Eau Claire. So we both got started at the same time. I was about 5 years old and he was 10. It just grew from there."

The Loomis brothers blossomed from there.

At age 15, Ben moved from Eau Claire to Park City, Utah, to attend the Winter Sports School. It’s a charter school in session from April until November, giving students the time to excel at sports like ski jumping, snowboarding or luge.

Both Ben and Adam eventually became members of Team USA in Nordic combined. Unfortunately, Adam did not make this year’s Olympic team.

But for Ben, making the Olympic team has been a dream.

"It’s almost surreal," said Ben. "I'm mostly trying to focus and treat it like any other competition. Not try any harder than I would in other competition. That's when you make mistakes, when you try to hard. You try to change your routine and make changes to your sport."

"That's what makes Nordic combined so interesting," said Ben. "It's balancing the two different sports. The more you train for one sport, the worse you get at the other one. So it's a really fine line of balancing them and being able to train both of them really hard and training both sides smartly."

When ski jumpers talk about their sport, they say it’s like you’re flying.

"Yeah, it's a very unique experience and once you learn how to do it, there's nothing like it," said Ben.

As for the 10-kilometer (a little more than 6 miles) cross-country race, Ben calls it a "unique distance."

"It's not quite a sprint event, but it's still really fast and hard the whole time through. Our courses are typically four laps, so each lap gets faster and faster and a little bit harder. So that makes it really exciting and challenging."

Currently, Nordic combined is a men’s only sport at the Olympics, but there could be a future where females compete in the sport in the Olympics as it’s expected to grow in popularity.

"The International Ski Federation moved women’s Nordic combined forward last March," said Tom Kelly, spokesman for U.S. Ski and Snowboard. "It was included at the Junior World Championships in Switzerland this year as a test event, where one U.S. woman entered. It’ll be a full medal event at next year's Junior Worlds. There is currently no timeline for when it will be included in World Championships or the Olympics. U.S. Ski and Snowboard incorporated it into our U.S. Championships this past fall."