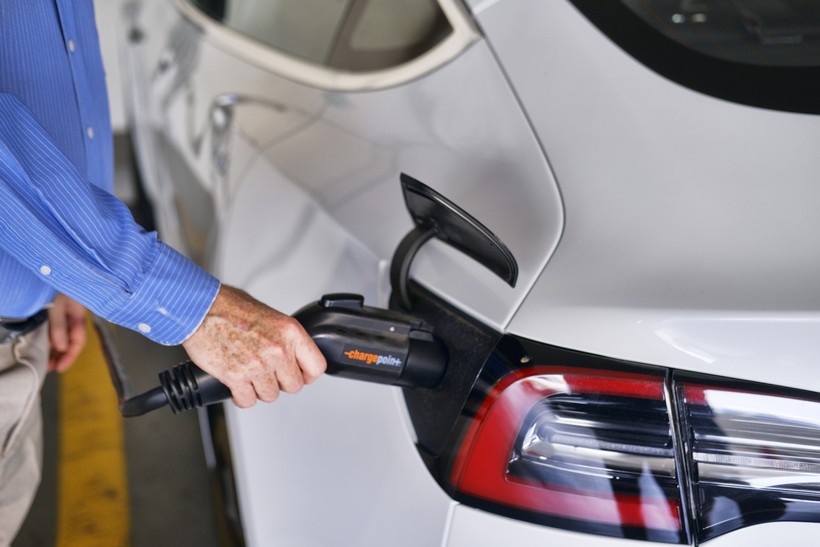 In this Oct. 16. 2019 photo a driver plugs in the Charge Point electric plug into his Tesla car at a parking garage in downtown Los Angeles. Richard Vogel/AP Photo

Goal Is Part Of City's Carbon Neutrality Pledge By 2050
By John Davis
Share:

As part of a plan to become carbon neutral by 2050, the city of Eau Claire has a goal of having everyone eventually driving electric vehicles.

"We’re looking at electrifying our fleet, our police vehicles, our snowplows and city buses. But our goal also includes electrifying every car in the city of Eau Claire. That means investing in charging stations and making it easier for people to own an electric car," said Beaton. "It also means energy conservation when it comes to transportation and investing in infrastructure that makes it easier for people to not use their car, which obviously is good for our carbon goals but also the community’s health."

Last year, Eau Claire became the first city in Wisconsin to approve a goal of carbon neutrality by 2050.

"A big part of achieving that goal is putting faith in the private sector to continue to create technology that makes electric cars cheaper and more enticing for the public to purchase," said Beaton. "We have no intention of forcing anybody to buy a certain kind of car, and we have no intention in having some impact on how the auto industry it’s continuing their progress. Our responsibility is to make it easier for people to make those smart choices around electric vehicles."

To make it more appealing for residents to drive an electric vehicle, city officials are working to create a community roadmap where people could have access to the charging stations in places like public parking lots.

"We’re seeing more and more electric vehicles on the road and those vehicles need to get their energy from someplace. As we de-carbonize the grid, the electricity that those automobiles use will be less carbon emitting," said Brian Elwood, a community manager for Xcel Energy in Eau Claire. "It’s important for us to work with our customers in communities on electrical vehicle programs. It’s a huge part of where we see carbon reductions coming in the future."

The U.S. Environmental Protection Agency has said fuel burning vehicles are the largest source of greenhouse gas emissions in the country.

"Public charging is really important. But what we’re seeing too is about 80-85 percent of the charging takes place at home," Elwood said. "We want to make it easy for customers who want to invest in electric vehicles to charge at home. We’re looking at new programs and options for customers to be able to do that."

Still, it’s not easy to find an electric vehicle to buy in the city of Eau Claire. Beaton said the city will have to do a better job bringing auto dealers into the discussion about carbon neutrality goals in Eau Claire.