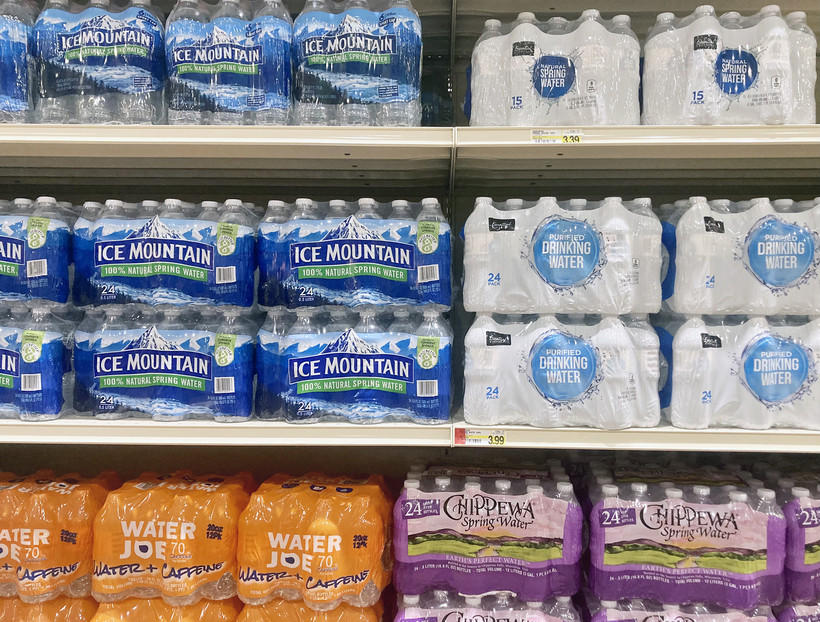 Bottled water packaged for sale at a grocery store on June 13, 2022. Danielle Kaeding/WPR

The Eau Claire City Council is set to vote Tuesday on a bottled water company’s plan to build a $65 million plant that would draw from the city’s water supply.

Supporters say the facility would provide dozens of good-paying jobs and millions of dollars in tax revenue, while opponents fear it will deplete water resources and increase plastic pollution.

California-based Niagara Bottling wants to build a 500,000 sq. ft. plant in the city’s Gateway Northwest Business Park that would draw 425,000 gallons each day in the first phase of its operation. After five years, the company may seek to double that amount to 850,000 gallons per day.

"We're really blessed to have a great source of water," Berg said. "And as our engineering firms have indicated, it's robust. It's prolific. It's epic."

For more than 140 years, the city’s wells have provided an abundant source of water that’s offered to more than 70,000 residents in Eau Claire, according to a city fact sheet.

Even so, opponents of the proposal fear the city’s plentiful water resources may be at risk. Eau Claire city council member Andrew Werthmann said hundreds of residents have contacted them with concerns about the proposal.

"People here are realizing just how invaluable water is, and the fact that there's shortages happening across our country already," Werthmann said.

Extreme drought has driven record low levels of Lake Powell and Lake Mead in the western United States that has reignited fears that water-starved areas may demand Midwest water.

A proposal by the Nova Group to ship Great Lakes water to Asia in 1998 eventually resulted in the Great Lakes Compact, which bars water diversions outside the Great Lakes basin. Still, some environmental advocates say limited exceptions, like allowing water to be removed in containers of 5.7 gallons or less, make the lakes vulnerable to bottled water companies.

And waters like the Chippewa River that help recharge Eau Claire’s wells aren’t protected under the landmark agreement because they lie outside the basin.

University of Wisconsin-Eau Claire student Riley Hoey has been seeking signatures for a petition against the plant, estimating around 1,000 people had signed as of Friday.

"We don't want to hoard our resources. That's not our intention… But inviting in one company like this and saying we will actively deal with you that invites in other companies," Hoey said.

At a May 24 city council meeting, the company's senior real estate development manager Khristopher Ward said they have nearly 50 plants nationwide, including in Pleasant Prairie. Ward said Niagara is a family-owned company that buys and holds their assets for the long-term.

"In terms of longevity and corporate investment, we're here for the long haul," said Ward.

Eau Claire’s city manager Stephanie Hirsch and deputy city manager David Solberg called Niagara’s proposal a beneficial development and one of the largest opportunities the city has ever seen with an overall investment of more than $100 million. The plant would provide between 58 to 100 jobs with an average wage of $59,000. It would also provide $16 million in tax revenues over 21 years.

Hirsch said that revenue is important for the city as it faces financial constraints due to cuts in state aid and levy limit restrictions since 2006.

"If we want to take care of our employees, if we want to provide services to our residents, and if we want to spend resources on making a difference in achieving our sustainability goals, we do need to have that revenue," sd Hirsch.

She said the development could limit the amount of money the city may seek in a referendum to fund city services.

The city has also committed to hiring a sustainability coordinator with revenues from the plant if Niagara’s proposal is approved. Hirsch said the position would advance Eau Claire’s carbon reduction goals and efforts to cut back on waste.

"Plastic bottles are contributing to the climate crisis that's going to destroy our planet," said Hoey.

One Pew study found 11 million metric tons of plastic end up in the oceans each year. By 2040, plastic pollution in the oceans could triple under business as usual. Less than 10 percent of plastic waste is currently recycled, according to the UN Environment Programme.

"This plant will be built somewhere, and so Eau Claire turning it down is not going to reduce the use of plastic," said Scott Rogers, vice president of governmental affairs for the Eau Claire Chamber of Commerce. "Really the most we can do is really begin to educate the public on the importance of recycling."

Aside from plastic pollution, opponents fear the city’s ample water supply could be diminished if development pressures increase. They pointed to areas like the state’s Central Sands region where groundwater withdrawals for irrigating farm fields has reduced water levels between a half foot to 3 feet on some lakes.

Some residents and city council members want the city to develop a water plan that protects or guides sustainable use for the future.

"Most of the people that contact us are actually more concerned about: How are we thinking about water long term? How are we taking into account that half of our wells are shut down because of PFAS?" Werthmann said.

Last fall, the city announced it had stopped using seven of 16 wells due to concerning levels of forever chemicals known as PFAS. Berg said the city has been able to pump 14 million gallons per day with those wells offline, adding more could be brought back online to meet demand.

"And, it might cause our levels of PFAS to go up slightly, but we're not anticipating a lot," said Berg.

City leaders also contend they’ve developed multiple plans over the years regarding infrastructure and water use. Berg said one 2014 study by engineering firm SEH Inc. found the city could provide water to surrounding towns without negatively impacting the aquifer.

City officials also say the now-closed tire plant Uniroyal once used 550 million gallons of city water each day roughly 40 years ago. That’s more than the amount that Niagara plans to use and the city’s current top water user Nestle — combined.

Regarding residents’ climate concerns, officials point to a 2021 report from the Wisconsin Initiative on Climate Change Impacts that found average precipitation has gone up 17 percent since 1950.

"There's been no indication and no signs that climate change is going to affect our part of the country like it is affecting the areas out West," said Solberg.

A rally will be held Monday at 6 p.m. about the proposal at Eau Claire city hall before the city council holds a public hearing. The council is set to vote on the proposal Tuesday.