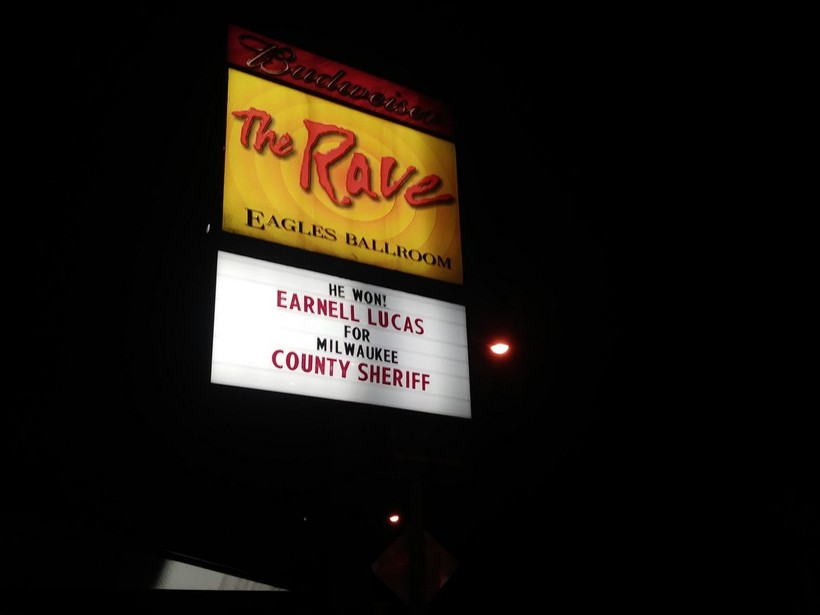 Earnell Lucas and more than 100 supporters gathered at The Rave in Milwaukee to celebrate his victory in the three-way Democratic primary for the job of Milwaukee County sheriff in the primary election Tuesday, Aug. 14, 2018. Ximena Conde/WPR

According to unofficial county results, Lucas won with almost 57 percent of the vote.

Coming in second was acting Milwaukee County Sheriff Richard Schmidt with about 34 percent of the vote. Schmidt took over the job when former Sheriff David Clarke resigned in 2017.

Sheriff's Deputy Robert Ostrowski received about 9 percent of the vote.

All three candidates campaigned on turning the department around after several deaths in the jail marred Clarke’s tenure as sheriff.

Lucas said he looked forward to working with community-based organizations and academics to turn the department around.

"And while there are those in our community who did not vote for Earnell Lucas or may not even support Earnell Lucas, let me say that I’m going to be your sheriff, too," he told a crowd of more than 100 supporters at his campaign party at The Rave in Milwaukee.

Ostrwoski was at Lucas’ victory party. He said he fully backed Lucas and thought he would be able to bring positive change to the department.

Lucas said he received a call from Schmidt who also expressed his support.

"I’m hoping that the sheriff’s department is a more visible force for good in our community and not one that just one that shows up at evictions," Johnson said, adding he would like the department to have a more robust presence in county parks, not just those by Lake Michigan.

Barrett praised Lucas’ ties to the community and said he hoped Lucas’ victory would create a new opening for the city’s law enforcement and the sheriff’s department to work together.

"For a long time we’ve been stymied because Sheriff Clarke had absolutely no interest in working with the city," Barrett said.

No Republican is on the November ballot for the position. But the Milwaukee Journal Sentinel reports Milwaukee County Deputy James Vollwock is planning a write-in campaign.