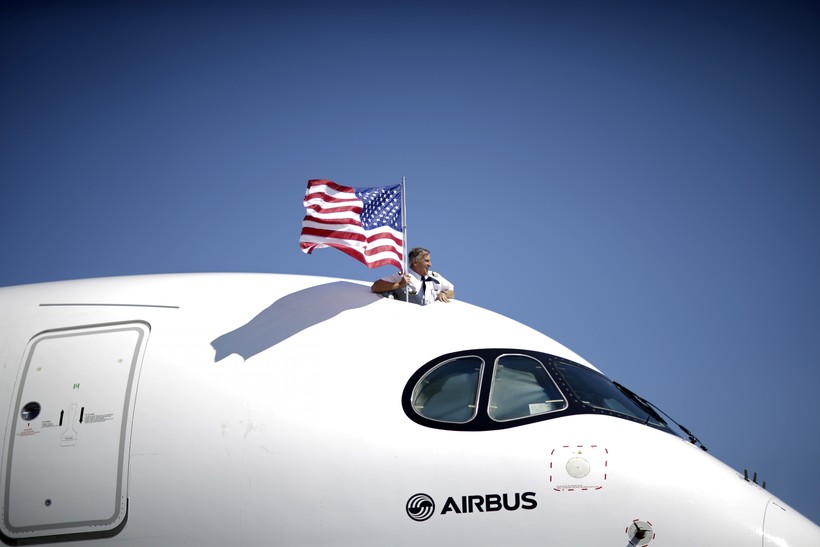 Airbus test flight engineer Bruno Bigand holds a flag as he stands in the cockpit hatch of a Airbus A350 XWB test flight aircraft at Newark Liberty international airport in Newark, N.J., Thursday, July 16, 2015. Airbus is showing off the aircraft to investors and airlines in Atlanta, Newark, Chicago and Milwaukee before the general public can experience the A350 XWB at EAA’s AirVenture air show in Oshkosh, Wisconsin. Mel Evans/AP Photo

EAA: Fate Of AirVenture 2020 Likely To Be Decided In May

More than half a million people from all over the world head to Oshkosh each summer for EAA AirVenture.

The annual showcase drew more than 10,000 aircraft to the region in 2019, according to the Experimental Aircraft Association (EAA). Attendees came from nearly 100 different countries. But this year, the fate of the event is still up in the air due to the coronavirus pandemic.

This year's event is scheduled to run from July 20-26.

For weeks, event organizers across the globe and in Wisconsin have been grappling with decisions on whether to postpone or cancel large gatherings. Their choices have run the gamut.

The Milwaukee Marathon was canceled.

The Democratic National Convention, originally scheduled to take place at Fiserv Forum in July, was moved to August. More recently presumptive nominee Joe Biden even floated the idea of holding it online.

Meanwhile, the Professional Golfers' Association said this week it plans to hold the Ryder Cup in September as scheduled. It’s slated to be played at Whistling Straits in the village of Kohler.

But Dick Knapinski, EAA’s director of communications, said the organization is holding off on a decision for now.

"We do have the luxury of having a little bit more time because our major decision points really don't come until early May where we have to take a hard look at things," he said.

That’s when EAA plans to make a call on whether to postpone, cancel or hold the event as scheduled, Knapinski said.

In the meantime, EAA is working with federal, state and local health officials to assess the situation.

That’s due in part to volunteer availability and weather concerns, Knapinski said. AirVenture attendees also fill thousands of dorm rooms at the University of Wisconsin-Oshkosh for one week each summer. Those rooms won’t be available once school starts, he added.

EAA employees are still serving members and working to prepare for AirVenture 2020 — they’re just doing it from home, Knapinski said.

AirVenture has overcome obstacles in the past.

"There have been challenges before but this is a new category of a challenge," he said.

AirVenture features a wide variety of activities including air shows, concerts, workshops and more. It has a huge following, with users streaming more than 315,000 hours of AirVenture content in 2019, according to EAA.

Canceling EAA would be another blow for the state’s tourism industry, which is already struggling because of the new coronavirus.

"The cancelations that happened in April and May have been a lot of conferences, meetings, group travel," said Amy Albright, executive director of the Oshkosh Convention and Visitors Bureau. "It’s had a devastating affect certainly on our hospitality industry."

Albright is hopeful AirVenture will happen this summer. Regardless, the area’s tourism industry will weather the storm, she added.

Oshkosh is billed as "Wisconsin’s Event City" and AirVenture is part of the fabric of the community, Albright said. She noted it brings international notoriety to the community of fewer than 70,000 people.

"I hope that when this is all over that people really think about that and don’t take those things for granted," she said.