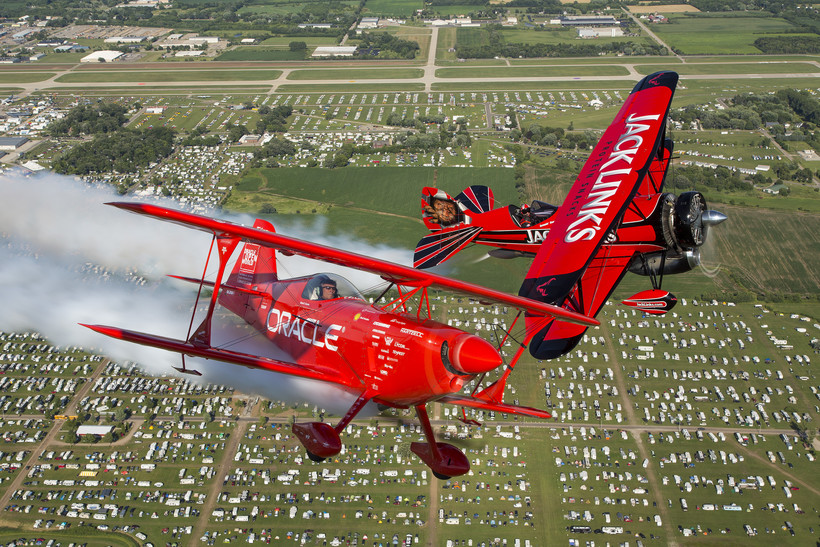 The EAA AirVenture this summer has been canceled.

More than half a million people from all over the world head to Oshkosh each summer for the event.

Last year, more than 10,000 aircraft were at the event and people came from nearly 100 countries, WPR previously reported.

This year's 68th annual fly-in was scheduled to run from July 20-26. It's the largest fly-in convention in the world.

People who pre-paid for admission and camping will be sent options to rollover their purchases for 2021 or will be refunded, according to the Facebook post. Next year, the event is scheduled for July 26-Aug. 1.

In less than an hour of the organization posting the news, hundreds of people had commented and thousands had shared the post.

The decision has received mostly positive feedback, EAA CEO Jack Pelton said Friday morning during a video press conference, noting some exhibitors had canceled in advance of the announcement. Some international attendees also expressed worries about whether they'd be able to travel to the United States before the decision was made to call off the event, he said.

In a press release Friday morning, Pelton said health and safety of attendees and staff, and restrictions on travel and gatherings were factors in the decision:

"The current status in Wisconsin is that it is still under a stay at home order until May 26, which completely eliminates our ability to start grounds preparation May 1. The reopening of the state also has no specific dates, creating uncertainty about mass gatherings in July. Ultimately, preserving the health and safety of all who would attend — and all the varying guidelines between states and countries from where our participants arrive — along with the massive commitments needed now for an event to meet EAA’s high standards, made cancellation the only option for this year."

Dick Knapinski, EAA’s director of communications, told WPR in mid-April the organization was holding off on making a decision because "our major decision points really don't come until early May where we have to take a hard look at things."

Initially, Pelton set May 15 as the decision date.

When EAA spoke to volunteers, attendees and exhibitors about possibly pushing back the event, it became clear that wasn't an option, Pelton said. AirVenture relies on the support of more than 5,000 volunteers each year.

AirVenture features a wide variety of activities including air shows, concerts, workshops and more. It has a huge following, with users streaming more than 315,000 hours of online AirVenture content in 2019, according to EAA. Over the next 45 days, EAA will explore how it can bring elements of its annual AirVenture event to a digital audience, Pelton said.

Pelton said the staff at EAA feel sad about what canceling AirVenture will mean for the local economy, but he said it didn't factor into the organization's decision.

"We think that the longer term economic damage, if the event occurred and there was a problem, would be far greater risk than the financial problems we're all going to have in the coming 12 months," he said.

Many Fox Valley homeowners rent their houses out during AirVenture each year. Pelton has spoken to some of those individuals about the decision to cancel the event, noting some had already taken their homes off the market this year due to coronavirus-related concerns, he said.

It'll be impossible to recoup the financial losses caused by the cancellation of AirVenture, Pelton said. He added, however, that EAA is in strong financial standing and that it hopes to begin hosting smaller events on its campus later this summer. Staff has already begun planning AirVenture 2021.