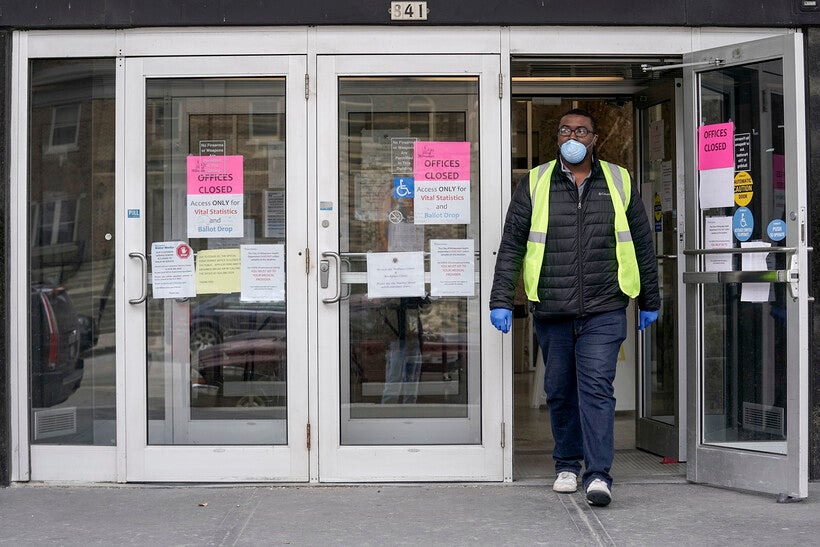 In this March 30, 2020, photo, a worker leaves the Frank P. Zeidler Municipal Building in Milwaukee. Gov. Tony Evers asked President Donald Trump on Tuesday, March 31, 2020 to issue a major disaster declaration for the state of Wisconsin due to the coronavirus pandemic, as unemployment claims hit a daily high and the state's health secretary warned lawmakers that Medicaid enrollments were going to increase dramatically. Morry Gash/AP Photo

DWD: State Unemployment Fund Could Be Depleted By October

The state’s Unemployment Insurance Trust Fund could run out of money by October if unemployment claims keep coming in at the current rate, the Wisconsin Department of Workforce Development (DWD) announced Thursday.

The fund had fewer than $1.9 billion remaining as of Wednesday, according to a news release from the agency.

If the fund runs out of money, the state will need to borrow from the federal government in order to pay unemployment benefits. Wisconsin did this during the Great Depression, according to the DWD release.

Though DWD said it’s impossible to know if or when the fund will run out of money, it outlined three possible scenarios.

Those estimates are made under the assumption that weekly benefits will average $325, the state will pay 85 percent of filed claims and 94 percent of those benefits will be charged to the fund, according to the release.

Dresser noted that federal coronavirus stimulus packages have dramatically increased the number of people who can access unemployment insurance.

The CARES Act, a federal stimulus bill passed in March, expanded benefits to cover new groups including the self-employed, individuals with health conditions that prevent them from working during the pandemic and parents who can't find child care, said Michele Evermore, a senior policy analyst at the National Employment Law Project.

"Unemployment insurance isn't just an individual benefit, although it is a lifeline to those workers," she said. "It's a macroeconomic stabilizer. It's actually really important that everybody who qualifies for a benefit apply and receive that benefit."

People with unusual career histories should apply if they've lost income during the pandemic, even if they're not completely sure they qualify, Evermore said.

"As long as you're honest and you make a good-faith effort to complete the application as thoroughly and truthfully as possible, the worst you can get is a denial," she said.

Before the coronavirus pandemic, Wisconsin's Unemployment Insurance Trust Fund was nearly full, meaning it had enough money to cover average benefits for a year during a typical recession, Evermore said. But this situation isn't typical, she added.

Evermore isn't surprised to see some states already applying for federal loans to replenish their unemployment funds, she said.

Wisconsin is in the middle of the pack when it comes to processing unemployment claims, Evermore said. A state's administrative budget for processing claims is based on the previous year's unemployment rate, she noted.

The CARES Act made the funds available to states that didn't require laid-off workers to wait at least a week before receiving unemployment benefits. Wisconsin legislators didn't vote to remove the one-week waiting period until weeks after the CARES Act was signed into law.

Wisconsin's economy is struggling through the coronavirus pandemic. Many businesses are closed under the state’s stay-at-home order, which is being reviewed by the Wisconsin Supreme Court.

Since mid-March, more than 33 million Americans have filed for unemployment benefits, according to numbers from the federal Labor Department.