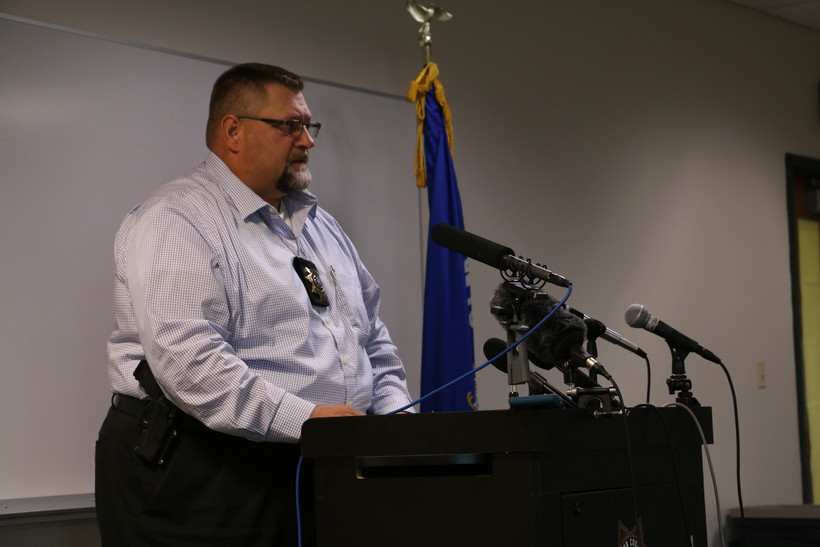 Dunn County Sheriff Kevin Bygd addresses reporters during a press conference about four bodies being found in an SUV abandoned in a cornfield in the Town of Sheridan. Rich Kremer/WPR

The Dunn County Sheriff's Office is investigating a quadruple homicide after four people were found shot to death in an SUV in a cornfield near the Sheridan Town Hall.

During a press conference Tuesday, Dunn County Sheriff Kevin Bygd told reporters the bodies were found by a farmer in rural, northern Dunn County at around 2:18 p.m. Sunday. He said the victims were from St. Paul and Stillwater, Minnesota, which is about an hour away from where the bodies were found. None had any connections with local residents in the area.

"As our investigation has progressed," said Bygd. "We believe that the suspect or suspects in this case left the area after abandoning the SUV in the cornfield. That's why we no longer feel that there is a concern for local residents safety."

Bygd wouldn't give a number of potential suspects in the investigation, but said officers are reaching out to people with known connections to the victims.

No time of death was given by Bygd, although he said a "ballpark" estimate would put it to within 24 hours of the victims bodies being found. He said it's unclear whether organized criminal activity or drugs might have been involved.

Bygd said investigators are working to retrieve images from cameras on nearby highways and bridges, as well as GPS data from victims' cell phones.

Earlier on Tuesday, the names of the victims were released. Those found inside the abandoned SUV include Nitosha Lee Flug-Presley, 30; Matthew Isiah Pettus, 26; Loyace Foreman III, 35; and Jasmine Christine Sturm, 30.

During the press conference, Bygd said two of the victims were brother and sister and the other two allegedly had been dating.

The sheriff was asked whether the case was unusual for the mostly rural county.

"It's highly unusual for this area," said Bygd. "Obviously, we've had homicides in the last several years. But something of this magnitude, I've been here for, I'm working on my 33-year working for Dunn County, and this is a first."