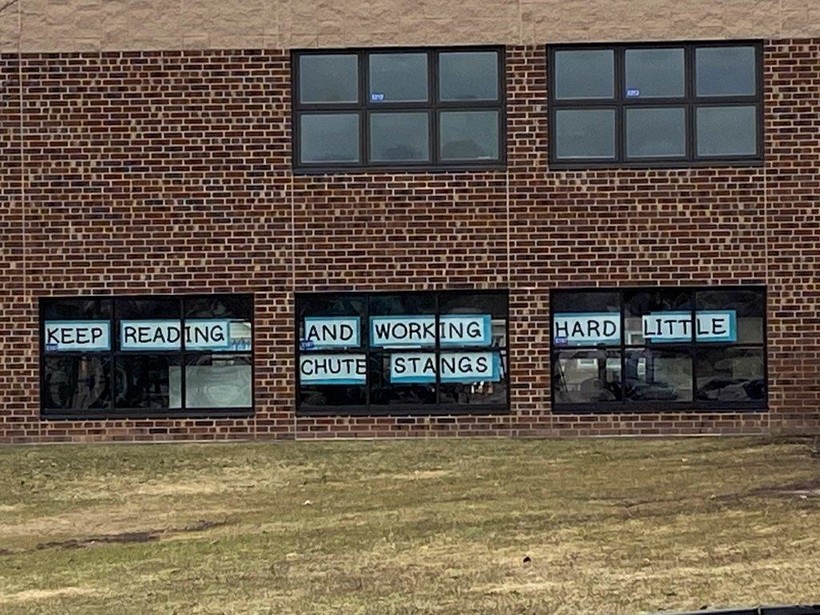 Notes of encouragement from teachers to students at Little Chute Elementary School. This photo is from March 31, 2020. Ellen Clark/WPR

As Schools Approach End Of Their First Month Since Closing, Districts Contend With The Limits Of Distance Learning
By Madeline Fox
Share:

When Gov. Tony Evers announced four weeks ago that schools would close to avoid spreading the coronavirus, districts around Wisconsin started scrambling to prepare students to learn from home, and to prepare schools to continue to provide food and other resources in new ways.

Even school districts with robust online learning programs hadn’t intended for those to replace in-person classroom instruction. And without being able to go to the schools and now-shuttered public libraries, many students didn’t have regular access to the internet or electronic devices they’d need to tune in to Google Classroom or Class Dojo.

Most districts started by surveying families. They put together online forms, mailed out questionnaires, or called families on the phone to find out where the gaps in technology access were.

Even once districts had a better picture of what families needed, the shifting guidelines from state and local officials and medical professionals meant they sometimes had to make new plans on the fly.

Appleton Area School District planned to distribute about 1,200 Chromebooks and 350 Wi-Fi hotspots to families. They’d intended to have families come by their local schools to pick them up using appropriate social distancing measures.

"Right as we were about ready to get that plan out, we learned from our city health department that perhaps we didn’t want to have everybody come to the school," said Appleton Area School District technology director Matt Zimmerman.

Instead, members of the district’s facilities and operations crew filled nine vans with devices and delivered them door-to-door last week.

Appleton and other school districts have gotten an assist from internet service providers offering free access to families without internet. Still, Zimmerman said, even the best-resourced homes are struggling with the new normal.

Many districts are filling in the gap with hard-copy resources.

The Green Bay Area School District had books from Scholastic shipped directly to students’ homes, including books in other languages for its English-language learning students. Districts across the state are handing out printed packets of schoolwork to parents who come to food distribution sites, uploading them to school websites or mailing them directly to families.

"What is being offered is in no way, shape or form a means to replace what would happen in a traditional classroom setting," said Tanya Ruder, chief communications officer at Kenosha Unified School District. "It’s an effort to provide a continuity of learning, based on the skills and knowledge already learned."

Districts have set up food distribution sites to provide food for families who need it. They typically bag up a breakfast and lunch, and drop it in the backseat or trunk of families’ cars to minimize contact.

Milwaukee Public Schools have been sending out four vans to deliver food in some of the cities’ food deserts, so even families who can’t make it to the district’s 20 food distribution sites get what they need.

Green Bay Area Schools superintendent Michelle Langenfeld said her district has passed out tens of thousands of meals since schools closed their doors.

Langenfeld added that, although learning is an important part of the schools’ mission, their top concern is meeting kids’ needs — with food, with technology and with resources for mental and emotional health.

"We took a quote from Vince Lombardi, we are Green Bay, 'The measure of who we are is what we do with what we have,'" she said. "We are trying to be flexible, empathetic, compassionate and really recognize that we’re all in this together."

Zimmerman and other Appleton school officials were thinking about the social effects of students being separated from schools when they plotted out how to get devices into the homes of its youngest students.

"The biggest concern that we had at the elementary level were the social/emotional concerns of our students, and what would it be like for them not to have any face-to-face contact with their teacher, for a month or two months or however long this lasts," he said.

Milwaukee Public Schools superintendent Keith Posley said that’s the No. 1 concern he hears from teachers — how much they miss their students.

As some parents have been managing their kids’ education from home, Langenfeld said she’s been happy to see more recognition for teachers.

"There’s a growing appreciation for what teachers do," she said. "I think the challenges and opportunities of the role of teacher is being elevated, and I'm glad to see that."

Schools are still working out how to assess students’ progress and readiness for the next grade, especially as it looks increasingly likely that students won’t return to classrooms this school year.

District leaders want to make sure students are "held harmless" for the things outside of their control — the limitations of online learning, access to internet or devices, parent help, specialized support for English-language learners or students with special needs — but are also recognized for their hard work.

Posley said Milwaukee schools may consider parent input in whether students move on to the next grade, as well how students were doing up until schools closed, or incorporating progress they’ve made in learning from home. His district, like others around the state, is still working out how to assess students.

"We’re looking at a combination of everything — everything is on the table," he said. "We’re talking about what we’re going to do around summer school, what credit attainment looks like, what class completion looks like."

At the state level, Wisconsin has canceled standardized testing until the pandemic is over and the state Department of Public Instruction will grant requests from schools to waive instructional time requirements. The state is also expecting to receive an influx of cash from the federal government to help offset schools’ costs amid the pandemic — an estimated $175 million under the CARES Act Congress passed in late March, and $47 million in other funds to be directed to K-12 and higher education.

Individual districts and schools are working out the best ways to handle important rites of passage for their students, like prom and graduation. They’re also looking ahead, anticipating the challenges of eventually bringing students back into schools after such a long period of fear and uncertainty.

"There are going to be individuals that are not ready to go back into large crowds, and I think we’re going to have to deal with that," said Posley. "The other piece that we’re going to have to look at is explaining this pandemic — I know parents and families have done just that, but they’ll want to hear that from their teachers, and I know that we have to be prepared to address that, because it will be a teachable moment."