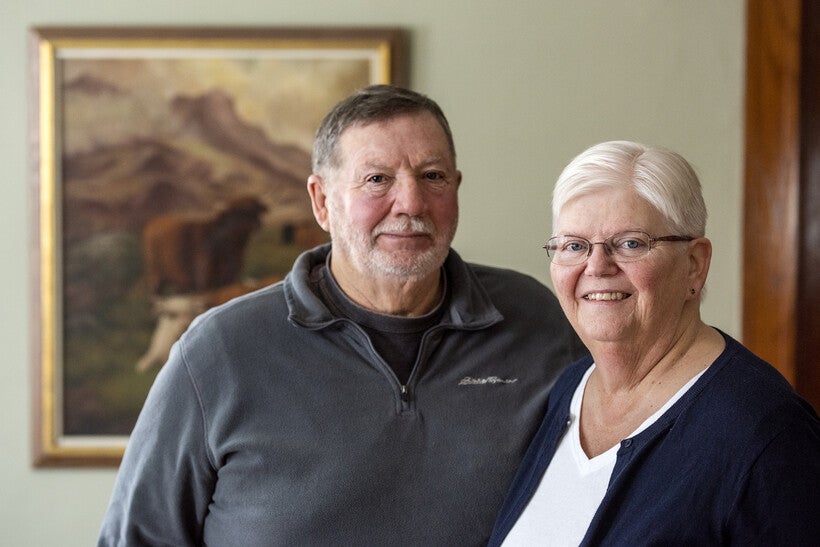 Dream, scheme and go for it: Farming couple wins Leopold Conservation Award after trusting the universe

'When you’re open to something that is right and just and good, it seems like the universe takes care of you'
By Jonah Beleckis
Share:

It was a leap of faith.

Dorothy and John Priske put their trust in the universe when in the late 1990s the couple shifted their farming model from growing corn and soybeans to a more environmentally friendly all-grass system.

But the change was not without sacrifice. John said when the decision was made there was no going back — only forward.

They said goodbye to their income from the farm in the town of Fountain Prairie, about 35 miles northeast of Madison. They were left only with the money Dorothy brought in working for a stockbroker in Madison.

John said it took three years for them to raise a decent crop of grass because of poor soil fertility and some chemical residue. After time, the Priskes elected to bring Scottish Highland cattle to their 160 acres of pasture land they had at the time. John described the cattle as a colorful, grass-loving breed with huge horns and long, shaggy hair.

After the couple started selling beef at the Dane County Farmers' Market, they had a visit one Saturday morning in 2002 from Odessa Piper, founder of the Capitol Square’s L’Etoile, an upscale farm-to-table restaurant.

Through that meeting, the Priskes made a foundational relationship for their farming career. It was a connection that spawned several others, widening the couple’s network. They ultimately worked with more than 37 different chefs across the state, John said.

They said their meat made it between hamburger buns in the .300 Club at the then-called Miller Park, now known as American Family Field. Madison residents or visitors who had a burger from Brasserie V or a tenderloin from L’Etoile can thank the Priskes — and the universe.

"There’s something about the way the universe works," John said. "When you’re open to something that is right and just and good, it seems like the universe takes care of you."

"At the time, we didn’t know exactly how it was all going to work out," he continued. "But you dream. You scheme. You have an idea. You imagine what might be, and then you just go for it."

At its peak, Fountain Prairie Farm had 550 head of cattle and hundreds of acres of land.

For their work in conservation and improving the land they made their home, the Sand County Foundation named the Priskes winners of the 2021 Leopold Conservation Award for Wisconsin.

The award recognition came after the Priskes were twice named finalists in the years prior. This time, Dorothy said it felt like the Oscars' lifetime achievement award.

"We were shocked, really shocked when we found out (we won)," John said. "We just didn’t expect it. There were some really, really good folks that had made the cutoff. We had looked at their resumes, and I was like, 'Well Dorothy, there’s no way.'"

When farms operate on the row-crop system, John said the spaces left bare between the plants remind him of getting cuts.

He said leaving that land bare can lead to wind or water erosion, both of which don't help plants grow or keep soil healthy. Having areas of soil not used for growing is like removing a part of a person’s skin.

The soil covers the Earth, and John said they wanted to let grass grow all throughout their land — making the soil healthier. The Priskes wanted a holistic cycle where Mother Nature and the animals worked cohesively: The soil becomes a home to the grass that feed the cattle, who then in turn do the harvesting and fertilizing, John said.

"If we can give plants and animals the opportunity to express themselves, with that opportunity they’ll reach their potential," he said. "If you want to harvest solar energy, keep your land covered. Grass is one of the best ways."

By transitioning from crops to grass, John and Dorothy were able to improve their soil fertility, doubling the amount of organic matter each acre had and moving the soil's PH level up to neutral.

John and Dorothy have been recognized for their conservation efforts before.

They received the 2010 Wisconsin Conservation Farmer of the Year from the Wisconsin Land & Water Conservation Association and the 2011 Leopold Restoration award from Friends of the Arboretum.

Songbirds and other grassland birds returned, he said. After they bought the farm back in 1986, when the whole property was one big corn field, they were thrilled the first time they saw a pair of sandhill cranes on the farm. Now, several hundreds flock to their fields in a given season.

"Improving the biodiversity of the farm with a grass-based system has paid off in the aesthetics and beauty of the farm," he said. "That’s part of that recognition that we’re getting. When people drive by, they see something different. It’s not just a corn field."

One motto the couple enjoys is, "Anything worth doing is worth overdoing," John said.

Dorothy said another one is, "Educate, share and learn." The couple said they want to educate by example, but they’ve also facilitated more direct teaching.

The Priskes lease land to Madison College's Institute of Sustainable Agriculture, and they have worked with University of Wisconsin-Madison researchers, according to a story on the Sand County Foundation’s website.

Some farmers might be the type to close off others who don’t understand the craft. But John said he aimed to be someone always willing to teach eager minds about the land or how to drive a tractor.

John told Wisconsin Public Radio’s "Central Time" he and Dorothy are disciples of Aldo Leopold and John Muir. The state is "big on all of our conservationists," he said.

The Priskes connected with some of their writings.

"All ethics so far evolved rest upon a single premise: that the individual is a member of a community of interdependent parts," Leopold once wrote. "The land ethic simply enlarges the boundaries of the community to include soils, waters, plants and animals, or collectively the land."

After years of effort and learning, John said they were "on the cutting edge of this whole local food movement." Visitors would come and see the Priskes "living the dream."

"They maybe didn’t always realize that we were up early, to bed late, and we did an awful lot of hard work," he said. "It didn’t just happen."

So, what’s next for the Priskes and the 280 acres they have now?

The land might see some change, but not too much. The land is under a conservation easement. The couple achieved that in 2012 with the help of federal and state agriculture agencies, as well as Groundswell Conservancy, a nonprofit based in Madison.

"We feel really good about knowing that this piece of property will always be a farm," Dorothy said. "It might not look like it does today, but it will be a farm."

John and Dorothy are both 72 years old. They have no children. They’ll celebrate their 50th anniversary in June.

During January, the two work on a puzzle. They play cribbage. They stay warm as they mull over what kind of seeds they could order for a spring garden.

They can’t do the same physical labor they once did, John said. So, they’re taking a "timeout."

"We’re not done just because we’re retired," he said. "We just don’t know what the next inspiration is that will move us forward."

Perhaps the universe will once again show them where forward goes.