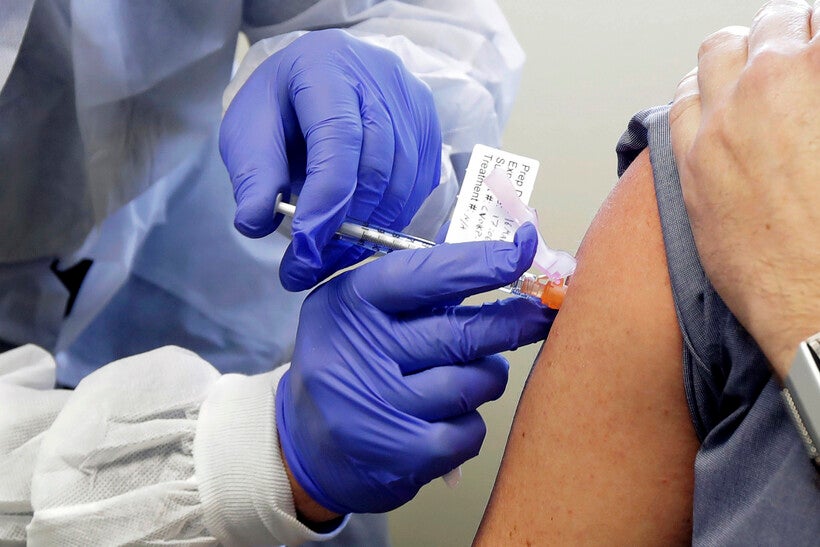 In this March 16, 2020, photo, a patient receives a shot in the first-stage safety study clinical trial of a potential vaccine for COVID-19 at the Kaiser Permanente Washington Health Research Institute in Seattle.Ted S. Warren/AP Photo

Rumors have been swirling about a potential vaccine for COVID-19 being available near the end of October. But bioethics expert Arthur Caplan recommends not counting on it.

Caplan, a professor of bioethics at the Division of Medical Ethics at the New York University Grossman School of Medicine, said it's much more likely that late next year will be the earliest the lion's share of the American public will have access to a vaccine.

The desperate push for a vaccine that would wage war on the pandemic's spread has been tied politically to the November presidential election. President Donald Trump has said during news conferences that a vaccine could be available "before the end of the year, and maybe even before Nov. 1."

But Caplan said that the realities of collecting data, manufacturing a vaccine and then distributing it collectively ensure that the vaccine will not be ready by election time.

Caplan said even if the Federal Drug Administration approves the vaccine, and even if that approval is based on early data, it's going to take a long time to make vaccines for 330 million people. That's especially true considering the vaccines, as they're currently being tested, require two vaccinations.

Currently there are three vaccines that have been approved for early or limited use. AstraZeneca paused its trials because one of its test participants became ill. It's not clear why the patient got sick, but recovery is expected.

An added complication is that the vaccines have to be refrigerated, which could pose a challenge when trying to move them across the country.

"That's why I find it almost silly to talk about dates like the end of October," he said.

Caplan said the Advisory Committee on Immunization Practices, which is part of the Centers for Disease Control and Prevention, is charged with getting a vaccine into distribution once it's been approved by the FDA. Deciding how and where the vaccine would get distributed is complicated, he said.

One factor is how effective the vaccine is. If it's about 50 percent effective, that could be enough to develop some herd immunity that will make it more difficult for the virus to transmit. Less than that, and some people might not think it's worth it to get the vaccine.

But Caplan warned, too, that health care fields aren't limited to doctors and nurses. There are housekeepers, food service providers, security personnel, information technology staff and a host of other workers who are needed in those facilities to help them run.

"I'm going to predict that even if we said 'health care workers first,' we're not going to be able to do all of them first," he said. "We're going to have to make decisions within that group."

He predicts members of the military also will be part of the first group to get vaccinated, with pressure from the Department of Defense.

"I'm sure they're going to step in and say, 'We don't care what the rules are and so forth; we are protecting those people in the military.'"

After the people at the highest risk levels are taken care of, the next likeliest candidates will be those who work in areas where spread is likely, such as in day cares, schools and in transportation industries.

"You're talking tens of millions of people by the time you're done," he said. "And I don't think we're going to have initially more than that kind of a supply to allocate out until the end of next year."

There may be some people who won't want the vaccine right away. They could claim that it was approved too quickly or with incomplete data, or because of vaccine hesitancy. In a Marquette University Law School poll of registered voters in Wisconsin released on Wednesday, 33 percent of respondents said they would either "probably not get" or "definitely not get" a freely available vaccine for the virus.

Waiting to get a vaccine could prove wiser in the long run, Caplan said, because future vaccines could end up being more effective or last longer than the initial vaccines.

"Being first may take you out of the pool for getting something that may be better later," he said.

Caplan thinks the best way to tamp down the virus is to vaccinate pandemic hotspots first. But he thinks countries that are able to get a vaccine to market first will likely take care of the residents of their own countries before sharing it with others.

"I think nationalism is going to prevail for a long time," he said.

Who Gets A COVID-19 Vaccine First, And Why 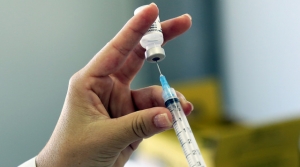 As scientists and researchers work to develop a vaccine for COVID-19, another obstacle remains. How to distribute the treatment to the world's population. We speak with a bioethicist about the proposed phases of the vaccine roll out, and discuss who is prioritized and why.