A central Wisconsin man fatally shot by a sheriff’s deputy in June had grabbed a kitchen knife and was attempting to stab the deputy, the state’s investigation into the incident found.

The Wisconsin Department of Justice on Monday released its investigation report into the June 11 death of Logan O. Johnsrud in the town of Arpin. A relative of Johnsrud had called police to ask for a welfare check after Johnsrud made suicidal comments.

Body camera footage released by the DOJ shows Wood County Sheriff’s deputies Nathan Dean and Cory Leigh talking with Johnsrud on the back patio of his relative's home about those comments, Johnsrud’s state of mind and his mental health for about 15 minutes. At one point Dean tells Johnsrud, "It’s not illegal or criminal to not be OK, or to be suicidal or anything like that."

Dean went into his patrol car and spoke on the phone with a crisis worker about services available to Johnsrud. When he returned from his car, Johnsrud ran into the house and locked the door behind him.

Leigh then forced open the door and went inside after Johnsrud.

In the home's kitchen, Johnsrud grabbed a knife and threatened Leigh with it, according to the report. Body camera footage shows Dean, who was standing in the doorway of the house, calling to Johnsrud to drop the knife, then firing three times. Leigh, who had struggled for the knife with Johnsrud and received a cut on his arm, was behind Johnsrud.

Bullets hit Johnsrud’s relative in his pinky finger, and Leigh in the arm. All three received medical attention from emergency responders with Pittsville EMS and Arpin First Responders. Johnsrud died at the scene.

An autopsy found Johnsrud died from a shot to the chest and had a second gunshot wound in his left arm, according to the report.

The DOJ report states its information was turned over to the Wood County Sheriff’s Office in July. No charges are being filed in the case. 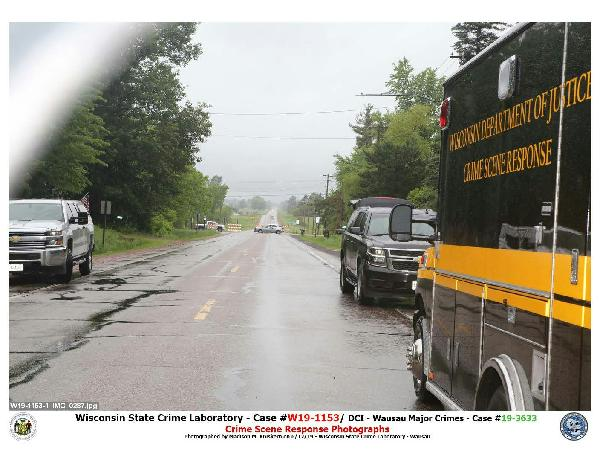 Emergency vehicles are seen outside the site of a June 11 police shooting in Arpin, Wisconsin. Photo courtesy of the Wisconsin Department of Justice

Earlier in the day on June 11, different police officers found Johnsrud walking on the side of the road barefoot, shirtless and covered in mud, with a cut on his stomach. The DOJ released body camera footage of that stop. Johnsrud declined help from deputies and the cut appeared to be superficial.

Then around 7 p.m. that night, according to the report, a van with an unknown driver dropped Johnsrud off at his relative’s house. He still had no shoes.

Johnsrud’s relative later told investigators Johnsrud was depressed and "just talking stupid." Johnsrud had attempted suicide in the past, according to the report.

On this night, he refused offers from family to go to a hospital or get other kinds of help. The relative was worried Johnsrud might have relapsed and used methamphetamine, though Johnsrud denied it.

In the body camera footage from police, Johnsrud said he had recently had a relapse but denied being intoxicated on June 11. Investigators later found a source who said she had used heroin and either meth or bath salts with Johnsrud earlier that day.

Johnsrud asked the relative for a goodbye hug, saying he would not see the relative again. The relative called the Wood County Sheriff’s Office to try to get help for Johnsrud.

Johnsrud denied being suicidal in his conversations with law enforcement, but when the deputy said he would have Johnsrud speak to crisis services, Johnsrud ran inside and locked the door. According to the report, he tried to cut his own wrists with the kitchen knife before the relative and then Leigh tried to wrestle it away from him.

The Washington Post, which tracks police shootings, lists six shootings in Wisconsin in 2019. As of early afternoon Monday, the database did not yet include Johnsrud. In early May, Milwaukee police fatally shot an armed man in the course of a search for a homicide suspect. Also in May, a police officer shot and wounded a man in Abbotsford after he hit an officer with his car as he was trying to get away.

Recent months have also seen police and firefighters shot in the course of their duties. In May, a firefighter was killed, and a police officer and one other person were wounded in a shooting by a man at an Appleton transit center. The shooter, Ruben Houston, was killed. In Racine, an off-duty police officer was shot and killed in June after he intervened in a robbery at a bar.

Evictions Likely To Spike Across Wisconsin As National Eviction Moratorium Ends
The Philippines Wins Its First Olympic Gold After Nearly 100 Years Of Trying
What Does The Law Actually Say About Vaccine Mandates?
Bill Would Allow Dogs In More Wisconsin Businesses
UW System Will Offer Scholarship Drawing For Students Who Get Vaccinated Against COVID-19