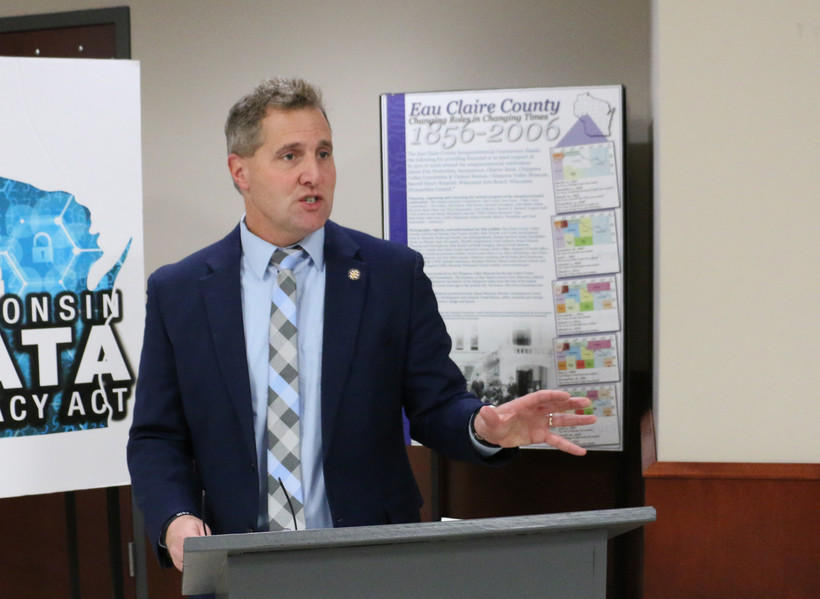 A western Wisconsin lawmaker has for years claimed one address as his home for tax purposes and another for voting purposes. Evidence suggests he does not live in the Assembly district he represents, which would be a violation of state law.

Allegations that Republican Rep. Shannon Zimmerman lives outside the 30th Assembly District surfaced before the November 2020 election, driven by Zimmerman's Democratic opponent in that race, Sarah Yacoub. Since the election, new information has come to light, and the local Democratic Party on Wednesday afternoon filed a new complaint with the Wisconsin Ethics Commission alleging that he failed to disclose a Florida business in his financial disclosure forms.

His residency was the subject of a 2020 complaint with the state's Elections Commission. For several years, Zimmerman has claimed Wisconsin's lottery tax credit on his $500,000 house in the Pierce County town of Clifton. By law, only a "primary residence" is eligible for the credit. That home is not in the district Zimmerman represents.

Since his election to the Assembly in 2016, Zimmerman has listed his voting address as a River Falls home where his son lives.

In September, the Milwaukee Journal Sentinel reported on the apparent contradiction between where Zimmerman says he lives for tax purposes and where he claims to live to vote and serve in the Legislature. He told the Journal Sentinel that he believed his having claimed the lottery tax credit on the Clifton home had been "an oversight and a mistake on the communication between my accounting firm."

Then he claimed the same credit on the Clifton home again in November, according to Pierce County property records.

Zimmerman's November 2020 lottery tax credit claim has not previously been reported. And Democrats in the region, including Yacoub, say it's just one of many pieces of evidence that the Clifton home is where Zimmerman actually lives:

Zimmerman's River Falls voting address is a duplex and he claims he lives in the basement unit.

"There's no mystery here," Yacoub said. "He doesn't live there."

Zimmerman declined to be interviewed for this story, but in a written statement called the accusations politically motivated. He did not address the substance of the claim.

"Unfortunately, it seems some people would like the election to continue, but it's over," Zimmerman said. "I am focused on serving my constituents in the Wisconsin state Assembly."

Wisconsin Elections Commission Is Not Designed To Be A Watchdog

Zimmerman is not the only politician to be stung by claims about not living in the district they represent. In Congress, members are not required to live in their districts. In 2017, a national investigation found that at least 21 members of Congress lived outside their districts. It's a matter for their political opponents to exploit in their campaigns — not a matter of law.

For state legislators in Wisconsin, that's not the case. State law requires that one's voting address be a "fixed" habitation "to which, when absent, the person intends to return." The law specifies that if the home is used "for transient purposes, it is not the residence" and even in some cases defines the home as "where the person sleeps."

During the 2020 primary, Democratic Assembly candidate Francesca Hong responded to a report that she did not live in her Madison district by saying she planned to move. In a statement to WPR this week, Hong, who won her election, said she signed a lease and moved into the district in September. She added that "living in the district is vital because it conveys commitment to the residents of the district that you care about your stake in the community."

But experts say there may be few avenues to effectively enforce the law. Jay Heck, director of Common Cause Wisconsin, said the 2015 move by state Republicans to split the Government Accountability Board into separate elections and ethics commissions removed the state's independent watchdog. The two commissions cannot launch investigations on their own, and are frequently deadlocked by tied partisan votes. Each commission has three Republican commissioners and three Democratic commissioners.

"That means that on any vote that's brought before the Wisconsin Elections (Commission) or Ethics Commission, if there's a 3-3 partisan vote, the three Republicans voting one way, the three Democrats voting the other, nothing happens," Heck said. "There's no investigation. There's no going forward on any action."

In Zimmerman's case, the seat he represents was formerly held by fellow Republican Dean Knudson, a supporter of Zimmerman's. Knudson is now one of the three Republican members of the Wisconsin Elections Commission — the same body tasked with investigating complaints against Zimmerman.

Daniel Myers, chair of the St. Croix County Democratic Party, said the party's complaint will include a call for Knudson to recuse himself from considering Zimmerman's case. But there are no rules that would require Knudson to do so.

Zimmerman has also come under fire for a Florida vacation rental business that he did not include in financial disclosure paperwork that lawmakers are required to file. A report this month by the Wisconsin Examiner noted that the limited liability company was created in 2018, but that Zimmerman had not disclosed the financial interest between 2018 and 2020.

In his statement to WPR, Zimmerman said he and his wife purchased the Florida home with his in-laws in 2018, using the LLC for joint ownership.

"We first thought we may rent it out, but that changed," Zimmerman said. "My in-laws decided to use it instead. ... During 2020, we did purchase a separate property for rental, and therefore it will require notice in the next filing."

Zimmerman said he confirmed with the state Ethics Commission that his paperwork was properly filed.

Myers with the St. Croix County Democratic Party said he wants to see a full investigation of the Zimmerman's Florida properties. And he says maintaining the River Falls voting address amounts to voter fraud by Zimmerman.

"I do find it quite rich that there are numerous members of the Assembly and of the GOP who have been crying foul over the election results from November, claiming there was fraud when there is no evidence of that," Myers said. "Lo and behold, the (representative) here in the 30th Assembly District has been committing voter fraud and election fraud in the last few elections."

Heck, from Common Cause Wisconsin, said the relative lack of independence of Wisconsin’s elections and ethics commissions amounts to an invitation for abuse.

"If you understand that the Wisconsin Ethics Commission is not going to be particularly hard-nosed about enforcing existing law," Heck said, "then there are some people who would react accordingly and say, 'Well, let's see what I can do. Let’s see what I can get away with.'"