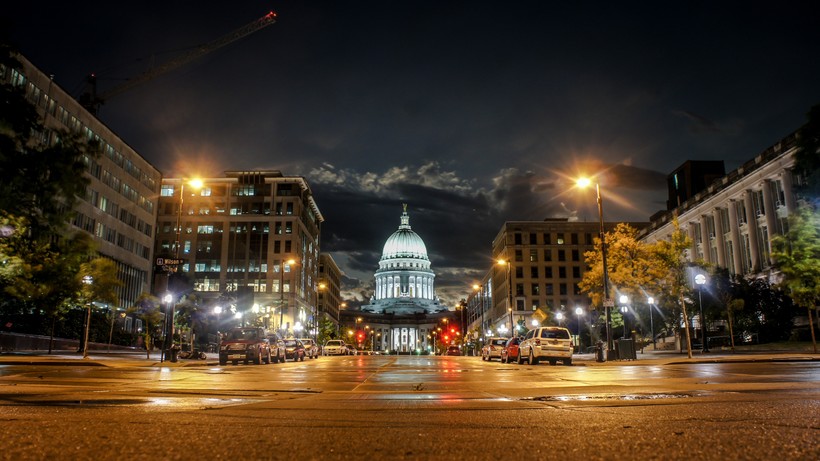 Documentary Focuses On 'The Masterpiece' That Is Wisconsin's State Capitol

For 100 years, the Wisconsin Capitol building has stood as an enduring symbol of democracy, civic engagement and Wisconsin pride.

It’s also impressively designed and quite beautiful, to say the least.

The building is also the subject of a new Wisconsin Public Television documentary. "Our House: The Wisconsin Capitol" premieres at 7 p.m. Monday, Nov. 27 on WPT, and delves into the design and construction of one of our state’s most cherished buildings.

That theme of "our house," or the idea that the state Capitol building shouldn’t just represent people but should be a place for the people, runs through the building’s history, says host Michael Bridgeman.

"This whole notion of opening up government to the people in better ways is part of what motivated the design of the building and how it is approached," he said. "I think the building really captures it."

The building's design process began in 1906, after the previous capitol building was ravaged by a fire. New York City-based architect George Post was tapped to design the building after winning a competitive search process.

"They really picked a winner when they got Post," Bridgeman said.

Construction began later that year, and didn’t end until 1917.

"He came up with really what is a brilliant design in many ways," Bridgeman said. "It’s a grand building, and it is beautifully sited with that St. Andrews Cross, the cross with the four equilateral arms … set dead center in the capitol square. And it reflects very much the time in which it was designed — the early 20th century."

And that’s to say nothing of the interior design, which features incredible marble work, sweeping murals and a rotunda unlike anything else. But only exploring the four wings of the building won’t give you a complete picture of the artistic style.

"When you’re in the public spaces, they look pretty much the same, but when you get into the particular chambers or rooms, they’re quite different," Bridgeman said. "And most of those rooms ... have skylights over them too, which adds color and light in a different kind of way."

"The paintings themselves I think wonderfully capture sort of the time of the early 20th century," Bridgeman said. "There’s something very optimistic and refreshing about them that I just love."

These days, hundreds of thousands of people visit the state Capitol every year. That includes about 50,000 school children from around the state, who often come on tours and field trips.

"It’s fun to watch them, because for a lot of these kids, this is their first time ever in the building," Bridgeman said. "They are just struck by it, because it’s not like anything else they’ve probably ever seen before."

Tour guides note children also enjoy searching for the fossils visible in the limestone and marble throughout the building, including a starfish on a staircase.

While it’s fun for visitors to pick out a fossil or admire the marble work, Bridgeman said it’s also worth stepping back and seeing how everything flows together as one.

"It’s very easy to focus on specifics, but try to think of the whole thing if you can," he said. "The color, the arches, the lines, the light, everything works so well together. It’s really stunning when you think of it as a total piece."

But don’t take Bridgeman’s word for it — go see it for yourself. It’s open every day of the year, and tours can be scheduled online in advance.

A virtual tour is also available.

Station information and showtimes for "Our House: The Wisconsin Capitol," can be found on Wisconsin Public Television’s website.