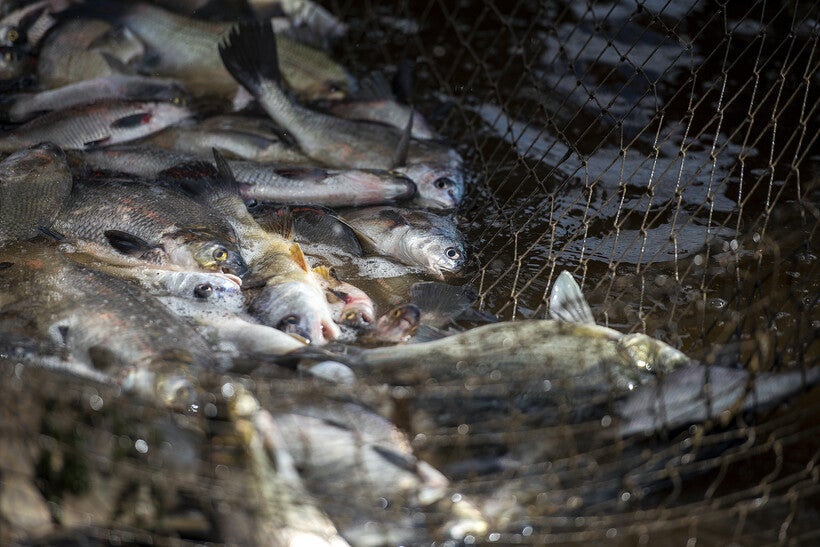 Biologists with the Wisconsin Department of Natural Resources are trying to find the cause of a large-scale fish die-off in the Fox River and lower Green Bay waters.

The state began to receive reports of dead fish in the area June 18, and the DNR staff began monitoring the area June 20, according to a statement from the DNR.

Most of the dead fish — largely channel catfish, carp and sheepshead — have been found downstream from the De Pere Dam and into the Bay of Green Bay, according to the DNR. Some dead fish have been reported as far north as southern Door County and upstream on the Fox River to Wrightstown Dam.

Jason Breeggemann, a DNR fisheries biologist in Green Bay, said it's impossible to estimate how many fish have died, but said a large area is affected.

"It's in the area of 10 to 15 river miles, and probably another 15 miles more of shoreline once you get out into the bay," he said.

So far, Breeggemann said, water quality samples collected in the area have been normal.

DNR biologists hope to test fish that are affected to try to find out what is killing them.

"Many of the dead fish we’ve recovered have, unfortunately, been too decomposed for testing. We need to conduct necessary disease testing to try and understand why this is happening," said David Boyarski, DNR Northeast District Fisheries supervisor. "It’s important that anyone who finds either dying or freshly dead fish contact us immediately."

Dying fish will have trouble maintaining their balance in the water, or are floating on the surface but still moving their gills. Freshly dead fish still have pink gills, according to the DNR.

The agency is asking that people not handle the dying or dead fish.

Sightings, along with an exact location or GPS location, can be reported to Breeggemann by email at jason.breeggemann@wisconsin.gov or by phone at 920-662-5480.