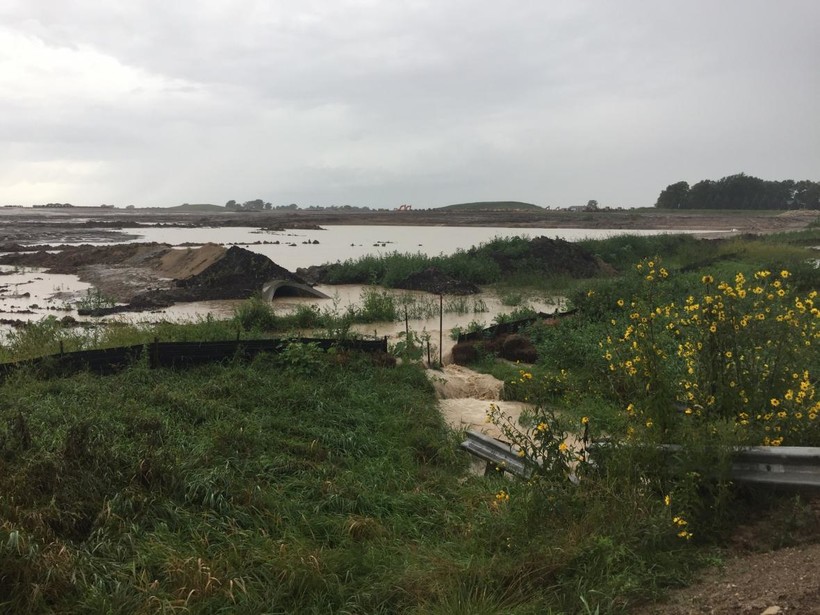 Photo of runoff at the Foxconn site over the Labor Day Weekend. Photo by Kelly Gallaher and courtesy of A Better Mount Pleasant

The Wisconsin Department of Natural Resources has fined a Foxconn subsidiary almost $1,200 for failing to comply with its erosion control plan in the Village of Mount Pleasant, which led to runoff in the area over Labor Day weekend.

When heavy rain hit the construction area over the holiday weekend, an advocacy group that pushes for transparency in government, A Better Mount Pleasant, posted a video on Facebook that showed runoff from the site spilling into Lamparek Creek, which leads to the nearby Pike River.

Foxconn, the Taiwanese manufacturer, has promised to create about 13,000 jobs in Wisconsin through a manufacturing facility in the village where it's already begun construction and a North America headquarters in downtown Milwaukee. The company is making other investments across the state.

A notice of noncompliance from the DNR issued Friday against FEWI Development Corp. said the company was supposed to build a drainage basin before stripping the area’s topsoil or grading the site, instead only 30 percent of the basin was finished when said work began.

A DNR inspection made at the request of the village found the entire area had been disturbed and contributed to the discharge.

The DNR’s notice of noncompliance states Foxconn has addressed the issue but part of the changes being made to improve erosion control include the DNR’s presence at weekly site meetings that will evaluate the company’s erosion plan.

"Prior to the Labor Day weekend, neither the Village of Mount Pleasant, nor the Wisconsin Department of Natural Resources, had received any complaints regarding runoff or other storm water management related matters," said Claude Lois, the village’s Foxconn project manager.

In a statement, Foxconn Technology Group said it took the necessary measures to address the issue.

"As a global leader in sustainable manufacturing practices, Foxconn firmly believes that we have a responsibility to help protect the communities in which we operate and mitigate against any potential negative impact of any aspect of our business," read the statement.