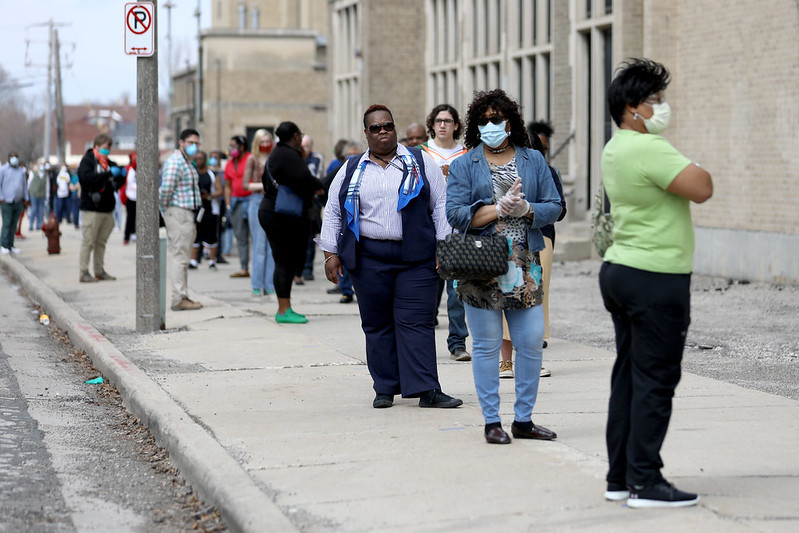 The voting line wraps around the block outside Washington High School in Milwaukee during the primary election on April 7, 2020. Coburn Dukehart / Wisconsin Watch

Did The April 7 Election Impact COVID-19 Cases In Wisconsin? Researchers Have Mixed Views

On April 7, over 400,000 people went out to the polls to vote in Wisconsin in the midst of the COVID-19 pandemic after the state Supreme Court struck down a last-minute attempt by Gov. Tony Evers to push voting back until June.

After the event, multiple studies were conducted to see how in-person voting impacted Wisconsin’s COVID-19 cases.

All but one study are preprint studies, meaning that have been submitted for peer review with the hopes of being published in a scientific journal.

The number of preprint studies and the different outcomes has caused some controversy, but researchers that spoke with WPR said they are trying to give Wisconsinites as much information as they can to help them decide what steps need to be taken to protect themselves during the pandemic with more elections scheduled later this year.

One of the first reports released was on April 28, with research led by a doctor from Milwaukee's Froedtert Hospital.

Researchers looked at confirmed rates of COVID-19 in the state’s three largest counties: Dane, Milwaukee, and Waukesha. Daily cases in Wisconsin and the United States were also analyzed from multiple COVID-19 dashboards, including Johns Hopkins and the Wisconsin Department of Health Services. The researched focused on daily cases 10 days before the election and 10 days following, with an incubation period from April 12-21.

"The ratios for the 10 days leading up to the election compared to after the election actually declined," said Dr. Andrew Berry, an internal medicine physician who contributed to the report. "So there was no spike, or no increase of cases based on the ratio that was seen after the election."

Researchers found that Wisconsin’s daily new cases of COVID-19 were lower than the rest of the U.S. during the study's selected incubation period.

Berry said that it is important for people to know that this type of information is difficult to measure. He said that studies coming out allow for further research and give health officials insight on how to manage the pandemic.

"Even if we learn one or two things from everyone’s study, maybe we can combine that for society to have a better, more organized election period going forward," he explained.

Berry said people shouldn’t focus on the number of cases linked to Election Day but rather what kind of behaviors they can use going forward.

This report is still waiting to be vetted before being published in a scientific journal. Berry told WPR releasing preprint studies is "the new age of science" and having multiple results can be beneficial.

Another report that was released on April 29 had a similar outcome as the first.

Researchers from Stanford University and the University of Hong Kong analyzed confirmed COVID-19 cases and new hospitalizations in the state roughly one week before the election and 11 days after.

They found that there was no evidence of a surge in transmission of the new coronavirus. The researcher’s incubation period was April 11-22.

Lawrence Wein is a professor at Stanford. He conducted research on transmission routes for influenza prior to the current research. He told WPR that the April 7 election was a huge crowd source and an opportunity to learn about COVID-19 transmission.

Lawrence said by deconstructing Wisconsin’s epidemic curve by dates of infections instead of dates reported, they found that hospitalizations in Wisconsin decreased from April 7 through 18.

"We estimated what we call the reproduction number for each day," Lawrence explained. "We were expecting to see a big jump on April 7, but we did not see that. The basic reproduction number is the number of people that would be infected by someone who was infected on that day."

Lawrence said the data sources they looked at are easily accessible but there are limitations to doing research on these type of topics and that it is hard to get a precise answer.

The report has been accepted into American Journal of Public Health according to Lawrence.

The most recent report, released on May 11, had a different outcome than the previous two.

Researchers from the University of Wisconsin-Oshkosh and Ball State University found a large increase in COVID-19 cases in the weeks following the election in counties that had more in-person voters per voting location.

Chad Cotti, an economics professor at UW-Oshkosh, explained that he and his colleagues used an analysis to measure how COVID-19 outcomes changed throughout counties.

"It had been established that transmission had occurred related to the election, and what we were interested in doing is trying to identify to what extent this transmission occurred and subsequently propagated in the state as a whole and what kinds of characteristics seem to be important in transmission provocations," Cotti said.

Researchers used cellphone tracking data from San Francisco-based SafeGraph to see how people were congregating before, during, and after election day for each county.

They found that the counties that had more in-person voting per location had a higher amount of positive cases a few weeks after the election.

"I think the big takeaway is that the findings suggest that, at least for future elections held during this epidemic, it may be prudent for election officials to take steps to expand the number of polling locations, increase hours, and add more early voting times all to keep the population density of voters as low as possible," Cotti explained.

Erik Nesson is an associate professor in the economics department at Ball State University who worked on the study. He said the point of research is pushing out available information to the public and to try to draw conclusive results.

He told WPR that all researchers will have limitations with COVID-19 data.

"In an ideal situation, what you would want to be able to do is talk to everyone who tested positive for COVID-19 and try to figure out exactly where they have been. Did they vote on election day, have they talked to someone who voted on election day?" Nesson said. "Then do a statewide contact tracing analysis but at least right now doing something like that is incredibly difficult."

The most recent article still has to be vetted before it is published in a scientific journal.