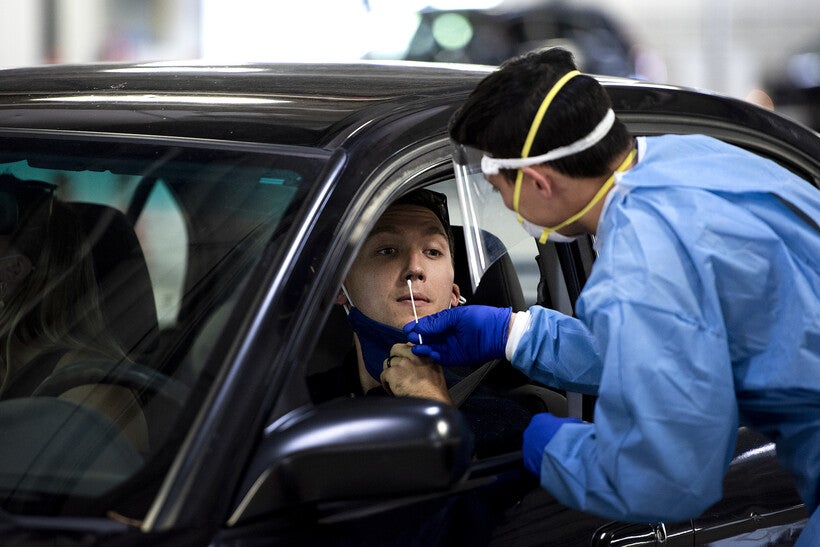 DHS Reports Most COVID-19 Deaths In Single Day Since May, As Cases Continue To Climb

There were 17 new deaths from COVID-19 in Wisconsin reported on Tuesday, the most reported in a single day since May, based on the latest data published by the state Department of Health Services.

New cases of the disease are also still on the rise. DHS reported 2,367 new cases on Tuesday, bringing the average for the past seven days to 2,255 daily cases. One week ago, the average was 1,838 daily cases.

The latest figures bring the overall total of positive cases in Wisconsin to 119,955, according to DHS. A total of 1,300 people in Wisconsin have died from COVID-19.

According to DHS, 22 percent of all test results reported Tuesday were positive for COVID-19, bringing the overall percentage of positive tests over the past seven days to 19.5 percent. That figure has been rising steadily over the past couple of weeks.

The percentage of positive cases is often read by public health officials as a measure of overall testing levels. A high rate could indicate that testing in the state is limited, and skewed toward those already flagged as potentially having COVID-19. A lower rate could indicate testing is more widespread.

Changes in the test positivity rate can also speak to COVID-19's spread, if the size and makeup of the testing pool stays consistent.

Wisconsin's daily testing capacity — based on the availability of test supplies and adequate staffing — has grown from 120 available lab tests in early March to 39,159 as of Tuesday. The number of actual people with test results reported Tuesday was 10,764.

COVID-19 activity varies heavily from county to county. The latest activity data from DHS, released once per week each Wednesday, showed that all 72 Wisconsin counties had a "high level" of COVID-19 activity. Activity level designations are based on "burden," or the number of new cases per a county’s population over a 14-day period, as well as whether there’s an upward or downward trend in new cases.

Spikes were particularly severe on Tuesday in Brown, Outagamie and Winnebago counties.

Two of the criteria are a statistically significant 14-day downward trend in COVID-like cases reported in emergency departments, and a similar downward trend for influenza-like cases in emergency departments. Wisconsin currently meets the criteria for COVID-like illnesses but not for influenza-like illnesses.

Editor’s Note: WPR has updated the language it uses in its daily coverage of COVID-19 statistics to clarify the distinction between COVID-19, an infectious disease, and the coronavirus (SARS-CoV-2) that causes that disease.