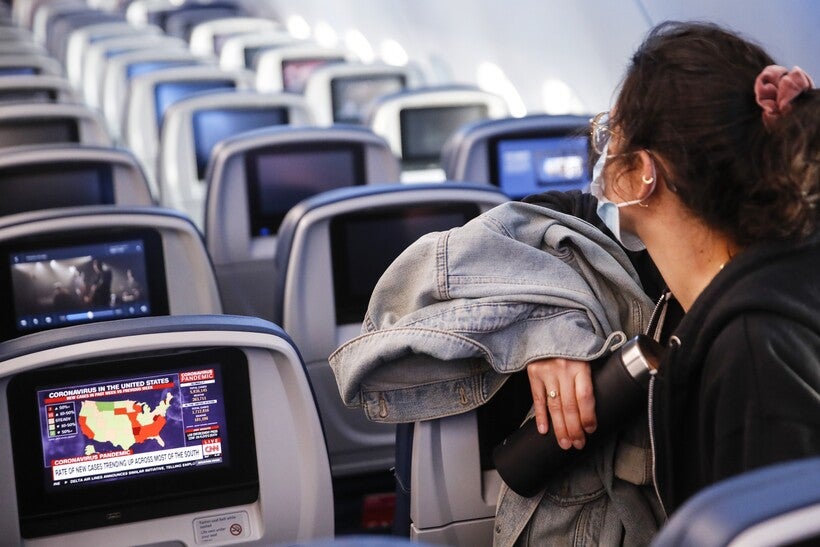 A passenger wears personal protective equipment on a Delta Airlines flight as a map depicting the spread of COVID-19 is displayed on a monitor after landing at Minneapolis-Saint Paul International Airport, Thursday, May 28, 2020, in Minneapolis. John Minchillo/AP Photo

New Cases Are Declining But Remain High Compared To Earlier This Year
By WPR Staff
Share:

After a recent spike, new reports of COVID-19 cases continue to decline in Wisconsin, though they remain higher than any point during the pandemic prior to this month, based on the latest data published by the state Department of Health Services.

There were 62 new deaths from COVID-19 reported Thursday. On Thursday, 8,653 tested negative.

Of the people who got tested for COVID-19 over the past week, 28.5 percent were positive for the disease, according to DHS. That rate has been on the decline since hitting an all-time high two weeks ago.

On Sept. 30, DHS also introduced an alternative positivity rate, one that measures the percentage of tests that are positive, instead of the percentage of people who get a positive result. The new metric takes into account people who have been tested multiple times. The seven-day average for that number is at 12.7 percent. Nationally, an average of 9.5 percent of COVID-19 tests came back positive over the last seven days, according to Johns Hopkins University.

According to the Wisconsin Hospital Association, there were 1,892 COVID-19 patients hospitalized as of Wednesday. A total of 16,658 people have been hospitalized because of the disease, or 4.4 percent of all positive cases.

The latest figures bring the overall total of positive cases in Wisconsin to 374,537, according to DHS. A total of 3,240 people in Wisconsin have died from COVID-19.

Wisconsin's daily testing capacity — based on the availability of test supplies and adequate staffing — has grown from 120 available lab tests in early March to 59,495 as of Thursday. The number of actual people with new test results reported Thursday was 13,748.