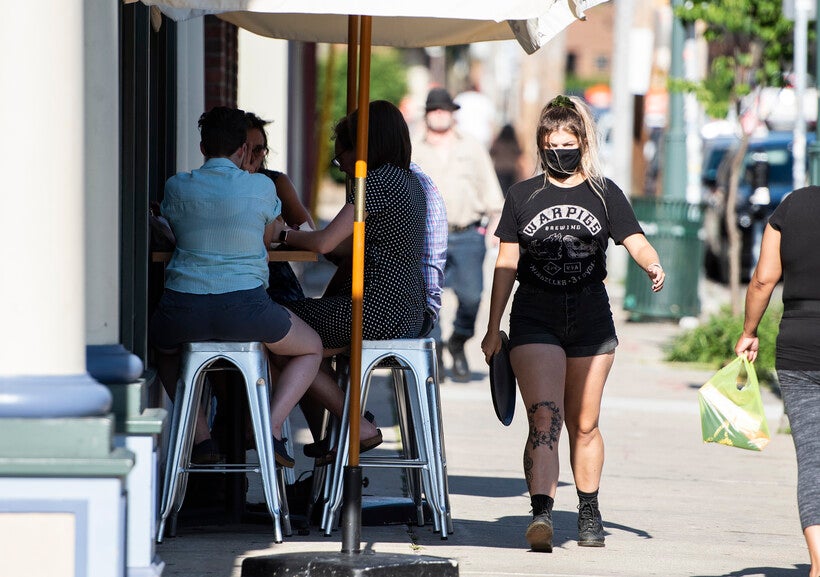 A waitress wears a mask as she works at a restaurant on East Brady Street in Milwaukee on Monday, July 13, 2020. Angela Major/WPR

Officials announced a statewide mask mandate, set to begin Saturday, as new reports of COVID-19 cases are on the rise in Wisconsin, based on the latest data published by the state’s Department of Health Services.

On Thursday, DHS Secretary Andrea Palm said Wisconsin is going in the wrong direction in terms of managing the state's coronavirus case count. The state is seeing significant community spread, she said.

DHS reported 1,059 new cases of the virus on Thursday, a jump from 870 cases Wednesday. Thursday marks the second highest number of daily new cases since the pandemic began, bringing the average for the past seven days to 887 daily cases. One week ago, the average was 896 daily cases.

The spike comes as several rural Wisconsin counties have seen a leap in cases. Barron County has recorded 150 new cases in the last two weeks, spurred by an outbreak at a food manufacturer, county health officials announced Thursday.

The latest figures bring the overall total of positive cases in Wisconsin to 52,108, according to the DHS. A total of 919 people in Wisconsin have died from COVID-19, with eight new deaths reported on Thursday.

According to DHS, 6.1 percent of all test results reported on Thursday were positive for COVID-19, bringing the average percentage of positive tests over the past seven days to 6.9. The seven-day average a week ago was 7.7.

Wisconsin's daily testing capacity — based on the availability of test supplies and adequate staffing — has grown from 120 available lab tests in early March to 24,156 as of Thursday. The number of actual tests reported on Thursday was 17,270.

In county-level data released Wednesday, the state reported 61 of its 72 counties now have high COVID-19 activity. Nine counties were classified as having medium levels of activity: Ashland, Crawford, Green, Green Lake, Iowa, Jackson, Vilas, Vernon and Richland counties. Only two, Florence and Rusk counties, had low levels of activity. Every region in the state was considered to have high activity.

There have now been confirmed cases in all 72 of Wisconsin's counties, and based on the data from Wednesday, only one county reported no new cases over a two-week period.