The Barron County Health Department is urging residents to stop unnecessary travel and avoid all gatherings following a dramatic surge of new cases of COVID-19. More than 150 new cases have been reported since mid-July, nearly half of which occurred at a food processing plant.

In the past two weeks, the number of people testing positive for COVID-19 has increased by more than 162 percent according to data from the Barron County Department of Health and Human Services. A press release issued by the department Wednesday reported 150 new cases across the county including a cluster at a processing facility in the city of Cumberland owned by Seneca Foods, though it did not specify how many employees had gotten sick. DHS data for Barron County showed 79 total positives on July 16. On Thursday, the agency reported 207 cases in the county.

Matt Henschler, Seneca Foods senior vice president of technical services, was quoted in the county announcement as saying the company is taking a "united approach" in identifying people who have tested positive or are symptomatic.

"Individuals are being isolated and monitored until cleared to resume activity," said Henschler. "CDC guidelines regarding the preparation and management for COVID-19 are being followed."

Henschler did not respond to an interview request for this story. 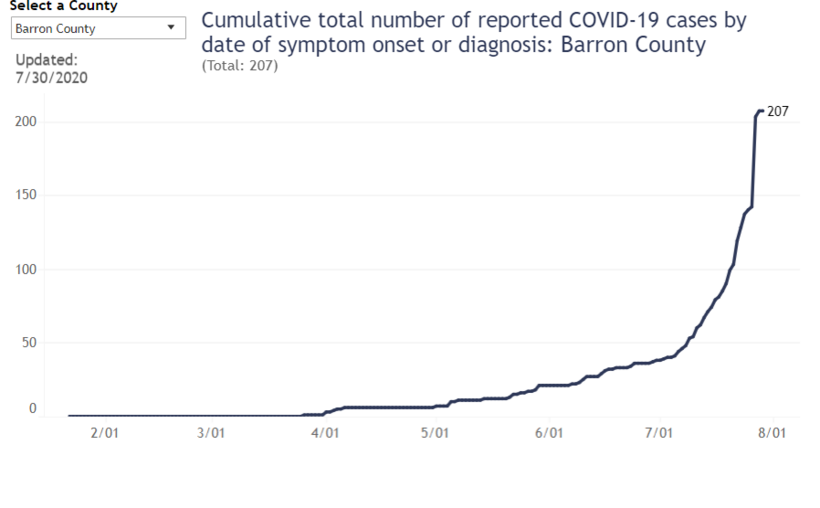 Graph from the state Department of Health Services

Laura Sauve, the county health officer, also noted in the press release that the cases at the Seneca food processing facility "is not the only cause for the increase in cases." She also said the company did a good job of following CDC recommendations in hopes of preventing cases.

"This situation shows just how quickly the virus can spread," said Sauve.

In an interview with WPR, Barron County Public Health specialist Sarah Turner said preliminary numbers show that just less than half of the 150 new county COVID-19 cases in the past two weeks could be traced to Seneca Foods. She said the health department did not know if masks had been required at the plant prior to the outbreak. Much of the other new cases in Barron County were reported in the city of Rice Lake, she said.

"A lot of the cases outside of the outbreak (at the Cumberland facility) can be traced back to travel gatherings, crowded spaces, things like that," Turner said.

During a Wednesday discussion with the Milwaukee Press Club, Wisconsin U.S. Sen. Tammy Baldwin touted a bill she co-introduced that would require the Occupational Safety and Health Administration to issue an emergency standard establishing a legal obligation for all workplaces to implement control plans to limit worker exposure to COVID-19.

"We're in the end of July," Baldwin said. "And we don't have a federal agency who's issued standards. All we have is voluntary guidelines. So that to me is an essential piece of it."

As of Wednesday, there had been three deaths in Barron County. Data from the DHS shows two of those deaths happened within the last week. Barron County Health's Turner said six people were hospitalized as of Thursday afternoon, with "several of them" in the intensive care unit.

Another press release from the county health department issued Wednesday urged residents to practice steps recommended in the now defunct "Safer-at-Home" executive order issued by Gov. Tony Evers and DHS Secretary Andrea Palm in March. Those include avoiding gatherings of more than 10 people indoors, stopping all unnecessary travel, not eating in restaurants or going to bars and frequent hand washing.

Turner said the county is encouraging everyone in the community to "please stay home" and isolate if they show flu-like symptoms.

"You know, one thing in our area of the world — in the Midwest — we have an awesome work ethic, which is a great thing," said Turner. "But unfortunately, in times of COVID-19, it can also be not such a great thing because, you know, even outside of this Seneca outbreak, we've seen people who have gone to work symptomatic because we always go to work."

The statewide stay-at-home order was struck down by the state Supreme Court May 13. That day there were a total of 10,902 positive cases of COVID-19 reported by DHS. That number has swelled to 51,409 as of Wednesday.

On Thursday, Evers announced a statewide mask mandate aimed at slowing the spread of the disease. The order goes into effect Aug.1 and is set to expire Sept. 28 and requires individuals 5 years and older to wear masks in indoor or "enclosed public places" when non-family members are present. Indoor public places, under the order, include indoor and outdoor bars, restaurants, stores, outdoor park structures and public transit. Those who don't follow the mandate could be fined up to $200.