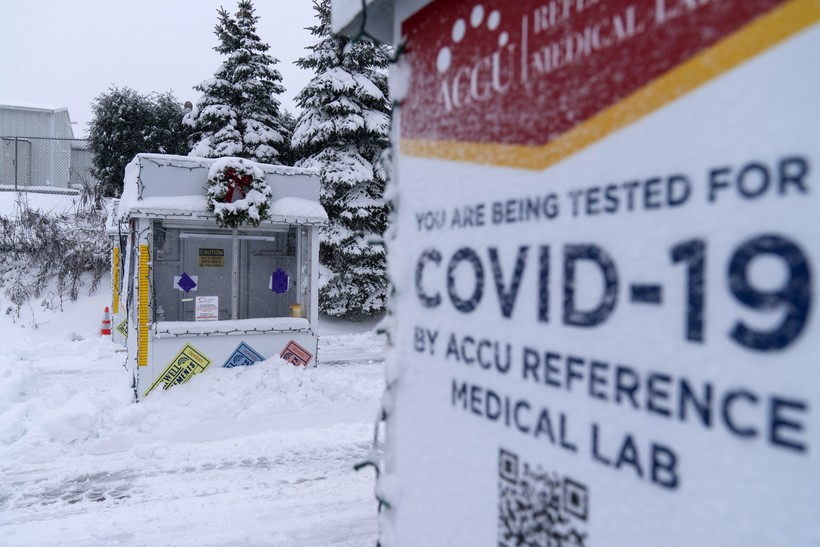 In this Dec. 17, 2020, file photo, A COVID-19 testing site at McCoy Stadium sits empty as State-operated testing sites closed due to a snowstorm in Pawtucket, R.I. David Goldman/AP Photo

Total due, in part, to testing backlog from holiday weekend, omicron variant and continued spread through state
By Rich Kremer
Share:

The Wisconsin Department of Health Services reported more than 8,000 new cases of COVID-19 Tuesday. That's the highest daily total recorded during the pandemic.

There were 8,058 new confirmed cases Tuesday. DHS says the high number is due to testing data coming in from the holiday weekend in addition to the continued spread of COVID-19 and the omicron variant.

Data from the Wisconsin Hospital Association show 1,963 COVID-19 patients were admitted to state hospitals. Across the state, just 35 ICU beds were available.

During a Mayo Clinic Health System media briefing on Tuesday, vaccine researcher Dr. Gregory Poland told reporters that while the omicron variant appears to cause less severe disease than the delta variant, more than one million cases are being reported across the U.S. each day. He said that's why many hospitals are being overwhelmed once again.

In light of that, Poland said it's worth stressing that a positive COVID-19 test does not necessarily mean individuals should go to the hospital.

In addition, said Poland, all hospitals can do with those individuals is provide treatments like Remdesivir, monoclonal antibodies or oral antiviral medications.

"But that's the problem, said Poland. "The availability is very limited in a massive surge like this one."

"That equates to decreased morbidity in adults who have large upper airways and is a decided negative in young kids who have narrow upper airways, and hence you get more problems," said Poland.

National data from the Centers for Disease Control and Prevention shows that as of Jan. 2, the number of children between zero and 17 years old being admitted to hospitals across the U.S. has jumped by 114 percent since the week of Dec. 20, with a seven-day average of 672 admissions. The data shows a far smaller increase among Wisconsin kids in that age range, at 43.5 percent and a seven-day average of 9 admissions between Dec. 27 and Jan. 2.

Mayo's Dr. Poland said evidence shows that current COVID-19 vaccines are not designed to combat the omicron variant. He said that's why some vaccinated individuals are still getting infected. But Poland said those vaccinations, along with booster shots, do help white blood cells known as T cells stave off a majority of disease associated with the virus.

"So, they still are susceptible to infection. But the odds are that infection will be asymptomatic or mild or trivial," Poland said. "For an unvaccinated or an incompletely vaccinated person, they run the risk of complicated infection and all the disease and complications associated with that."