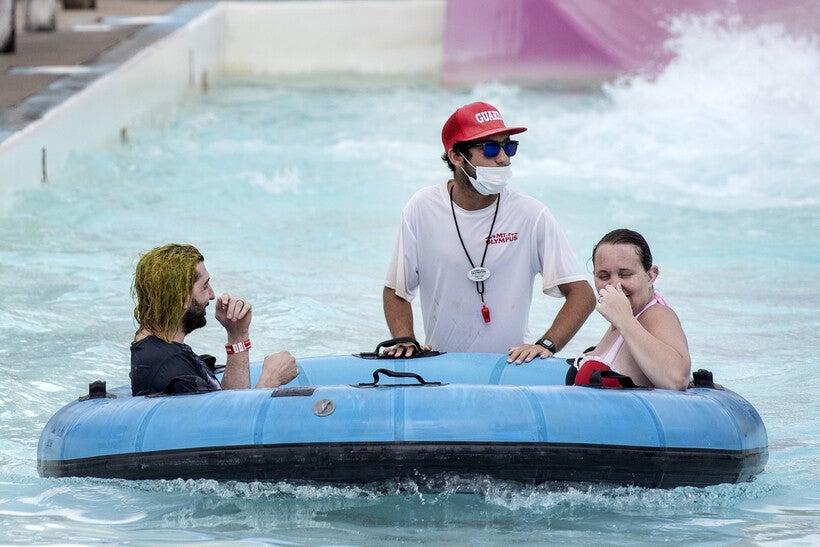 A worker wearing a mask at the Mt. Olympus water park helps two people in a raft at the bottom of a water slide Monday, Aug. 10, 2020, in the Wisconsin Dells. Angela Major/WPR

Wisconsin Has Now Had Over 80,000 Cases Of Virus
By WPR Staff
Share:

The state Department of Health Services reported 946 new cases of the coronavirus on Saturday, bringing the average for the past seven days to 786 daily cases.

The seven-day average is nearly 100 cases higher than it was a week ago, though part of the increase can be attributed to a large spike of 1,498 cases reported on Friday. The DHS said that was caused by technical issue with the laboratory test reporting system.

"Problems with the laboratory test reporting over the last few days delayed the processing of the numbers until today, but that has now been fixed," said a post on the DHS Facebook page.

The latest figures bring the overall total of positive cases in Wisconsin to 80,300, according to the DHS. A total of 1,168 people in Wisconsin have died from COVID-19, with 15 new deaths reported on Saturday.

According to DHS, 11.8 percent of all test results reported on Saturday were positive for COVID-19, bringing the overall percentage of positive tests over the past seven days to 9.5 percent. As of Saturday, Aug. 29, the seven-day test positivity rate was 8.2 percent, which remained fairly consistent this week until the spike of cases reported Friday.

Wisconsin's daily testing capacity — based on the availability of test supplies and adequate staffing — has grown from 120 available lab tests in early March to 27,080 as of Saturday. The number of actual people with test results reported on Saturday was 8,021.