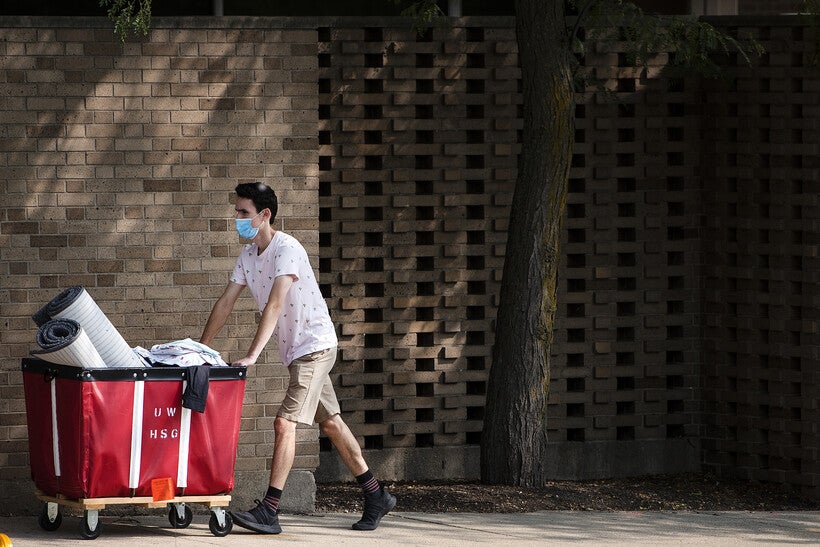 Freshman student Eli Michor rolls his belongings out of Sellery dormitory Tuesday, Sept. 15, 2020, at UW-Madison. Michor said he is withdrawing from his first semester at UW-Madison and will opt for a semester of community college near his home in Western Springs, Ill., instead. Angela Major/WPR

DHS: All Wisconsin Counties Have High Levels Of COVID-19 Activity

Wisconsin's seven-day average for daily new cases of COVID-19 increased to a new record high, and all 72 of the state's counties were shown to have high levels of COVID-19 activity, in the latest daily update from the state Department of Health Services.

DHS reported 1,762 new cases of the virus Wednesday, the fourth-highest daily total the state has seen since the beginning of the pandemic. Wednesday's numbers bring the average for the past seven days to 1,889 new cases per day — a record high.

COVID-19 hospitalizations are also at a record high in the state, with DHS showing 474 hospitalized patients in Wisconsin.

The latest figures bring the overall total of positive cases in Wisconsin to 105,932, according to DHS. A total of 1,259 people in Wisconsin have died from COVID-19, with eight new deaths reported Wednesday.

DHS also updated its COVID-19 activity data for counties and regions in the state Wednesday. The weekly update showed all 72 counties and all regions of the state had a "high level" of coronavirus activity. Activity level designations are based on "burden," or the number of new cases per a county’s population over a 14-day period, as well as whether there’s an upward or downward trend in new cases.

According to DHS, 13.1 percent of all test results reported Wednesday were positive for COVID-19, bringing the overall percentage of positive tests over the past seven days to 16.9 percent, a new record high. The seven-day test positive rate has also been increasing since early September, when it was just above 8 percent.

Wisconsin's daily testing capacity — based on the availability of test supplies and adequate staffing — has grown from 120 available lab tests in early March to 38,863 as of Wednesday. The number of actual people with test results reported Wednesday was 13,453.

DHS still has a dashboard showing Wisconsin's progress on gating criteria under the now-defunct Badger Bounce Back Plan. Those gating criteria would have been used to determine when it would be safe to begin reopening the state, prior to the state Supreme Court ruling that ended a statewide stay-at-home order. The state has never met all six of the criteria at once.

As of Wednesday, 6,821 people, or 6.4 percent of those who have tested positive for the new coronavirus, have been hospitalized with COVID-19. DHS officials said they don't know the hospitalization history of 38,515 COVID-19 cases, or 36 percent of all cases.