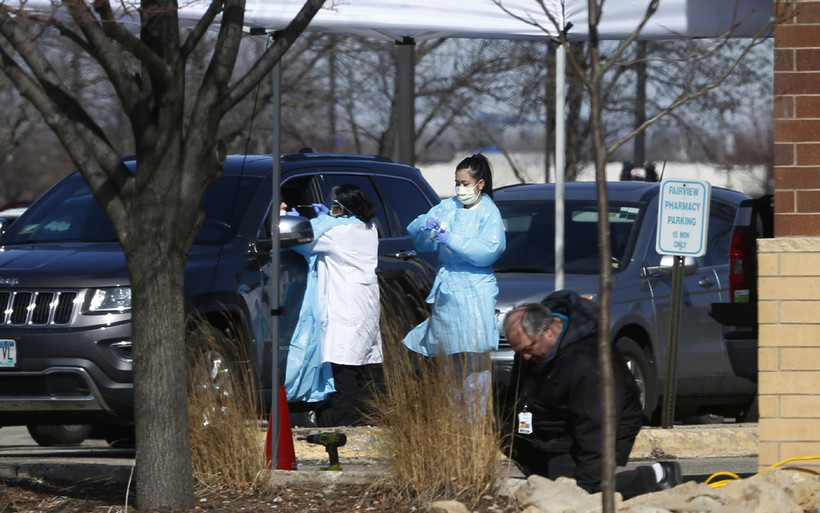 Medical staff wearing safety garments assist a driver at a new coronavirus drive-up test clinic, one of several in the metropolitan Twin Cities area, Friday, March 13, 2020, in Bloomington, Minn. The vast majority of people recover from the new coronavirus. According to the World Health Organization, most people recover in about two to six weeks, depending on the severity of the illness. Jim Mone/AP Photo

There are 3,721 positive cases of COVID-19 in Wisconsin, the state Department of Health Services announced Wednesday.

According to figures from DHS, 182 people in Wisconsin have died from COVID-19 as of Wednesday afternoon.

The number of positive test results increased by 166 people from Tuesday to Wednesday.

At a press conference, DHS Secretary-designee Andrea Palm said the state's Safer at Home order is working. She said models show that the state's restrictions on gatherings have saved at least 300 lives in its first three weeks, and as many as 1,400 lives.

"Together we have saved lives, and together we'll save more," Palm said.

Across the state, 39,326 people have tested negative for the virus so far. From Tuesday to Wednesday, the number of negative test results increased by 1,329.

Wisconsin's cities are seeing the highest number of positive cases of COVID-19. There are now confirmed cases in 65 of Wisconsin's 72 counties.

The following counties have no confirmed cases as of Wednesday afternoon: Burnett, Forest, Langlade, Lincoln, Pepin, Taylor and Vernon.