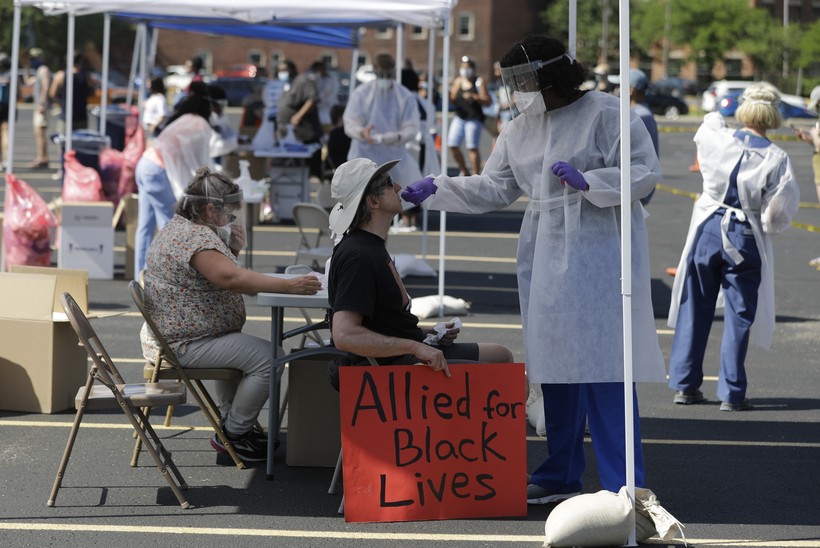 David Webb is tested for COVID-19 by Shaleea Mason after Webb attended a non-violent sit in at the Statehouse in Indianapolis, Saturday, June 6, 2020. The demonstration was over the death of George Floyd. Floyd died May 25 after being restrained by police in Minneapolis. Darron Cummings/AP Photo

There have been 20,835 positive cases of COVID-19 in Wisconsin as of Sunday, according to the state Department of Health Services. That's an increase of 264 cases from the day before.

According to health officials, 647 people in Wisconsin have died from COVID-19 as of Sunday afternoon. That's two new deaths since Saturday's numbers.

The largest increase in confirmed cases — double-digit growth — was seen in Dane, Milwaukee and Kenosha counties.

DHS reported 325,867 negative tests for the new coronavirus, an increase of 11,065 from Saturday to Sunday.

Wisconsin's daily testing capacity — based on the availability of test supplies and adequate staffing — has grown from 120 available lab tests in early March to 15,418 as of Friday. An increase in testing is one reason for the increase in the number of positive cases. The percentage of positive tests was 2.3 percent on  Sunday. This is a drop from Saturday's total, which was 2.7 percent. The percentage has hovered around 3 percent for the past several days.