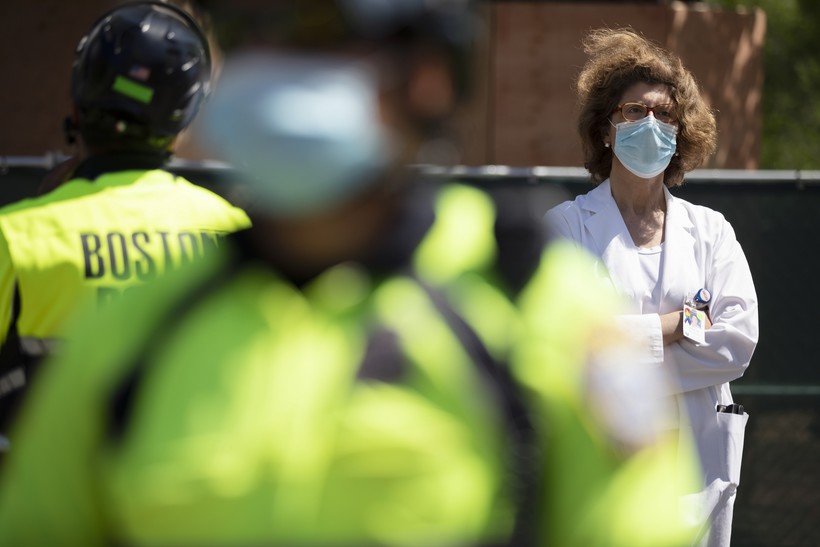 A doctor from Massachusetts General Hospital stands in counter-protest across the street from a demonstration calling for the lifting of all government restrictions related to concern about the spread of COVID-19, Saturday, May 30, 2020, outside the Statehouse in Boston. Michael Dwyer/AP Photo

There have been 19,400 positive cases of COVID-19 in Wisconsin as of Wednesday, according to the state Department of Health Services. That's an increase of 483 cases from the day before. It's the biggest case jump the state has seen in recent days.

On Monday, Wisconsin had the smallest single-day increase in weeks with 140 more cases between Sunday and Monday.

According to health officials, 616 people in Wisconsin have died from COVID-19 as of Wednesday afternoon.

DHS reported 279,711 negative tests for the new coronavirus, an increase of 15,968 from Tuesday to Wednesday.

Wisconsin's daily testing capacity has grown from 120 available lab tests in early March to 15,115 as of Wednesday. An increase in testing is one reason for the increase in the number of positive cases. The percentage of positive tests was 2.9 percent Wednesday. It was 3.6 percent Tuesday and it hit its lowest point Sunday at 2.3 percent.

The state has also seen a downward trajectory of COVID-like illnesses reported within a 14-day period.

As for the state's hospitals, 95 percent report being able to treat all patients without crisis standards of care and 95 percent of hospitals claim they have arranged to test all symptomatic staff treating patients, according to DHS. There hasn't been a downward trend of COVID-19 cases among health care workers, calculated weekly, or a downward trend of flu-like illnesses reported within a 14-day period.

On Thursday, DHS Secretary Andrea Palm announced $10 million will be used to reimburse health clinics providing coronavirus-related care to underserved populations. The funding is from the federal coronavirus relief bill. Rural and tribal health clinics, community health centers, and free and low-cost clinics are eligible for the funding.

Friday was the first time the state met the plan's goal of testing 12,000 people per day for COVID-19, with DHS reporting a total of 12,869 tests. Testing totals dipped over the weekend, with DHS reporting 9,320 tests Saturday, and 7,195 Sunday. On Wednesday, 16,451 tests were reported.

There are confirmed cases in all 72 of Wisconsin's counties with large increases in case rates recently reported in Forest and Racine counties.