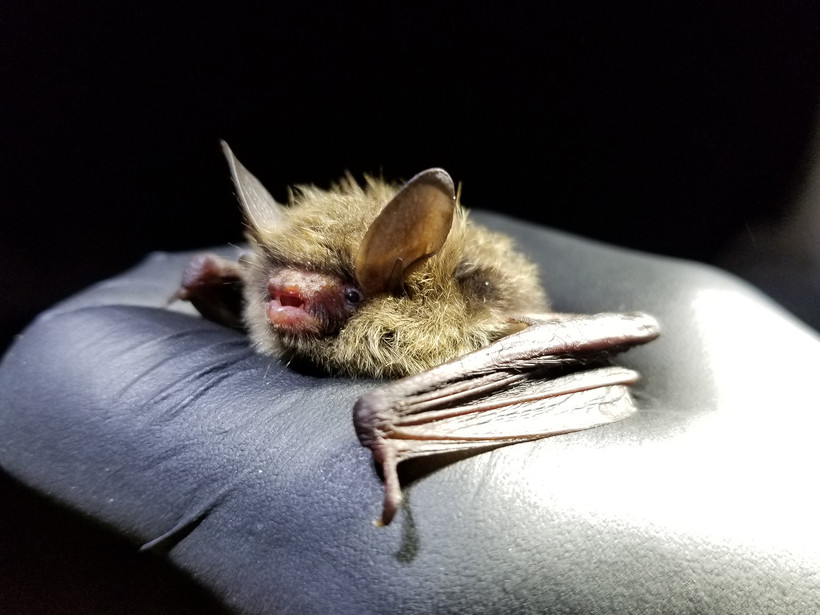 The northern long-eared bat has declined almost 100 percent across most of its range, according to the U.S. Fish and Wildlife Service. Photo courtesy of the Wisconsin DNR

Once-common bat has declined almost 100 percent across most of its range
By Danielle Kaeding
Share:

Northern long-eared bats are known for hiding in cracks and crevices within caves, making them difficult to find. Now, they're at risk of disappearing altogether.

The U.S. Fish and Wildlife Service announced a proposal to list the bat as an endangered species on Tuesday as a deadly fungal disease has decimated the once-common bat species.

The disease that looks like white fuzz on bats' skin was first discovered in New York in 2007. Within 15 years, the bats' population has declined 97 to 100 percent across nearly 80 percent of the species' range.

The northern long-eared bat has been found in 37 states, including Wisconsin. The bat is one of eight species native to Wisconsin and one of four species known as cave bats that hibernate during the winter.

The Wisconsin Department of Natural Resources has a bat monitoring team that had been tracking the state's bat species prior to the first detection of the deadly fungal disease in 2014 at an abandoned mine site in far southwestern Wisconsin.

White nose syndrome hasn't only devastated long-eared bats. It has caused the decline of other species in Wisconsin. But the northern long-eared bat has been hit the hardest, according to Owen Boyle, species management section leader in the DNR's Bureau of Natural Heritage Conservation.

"It's really an unprecedented wildlife conservation disaster," said Boyle. "We haven't seen anything like this, arguably, since maybe the passenger pigeon extinction." 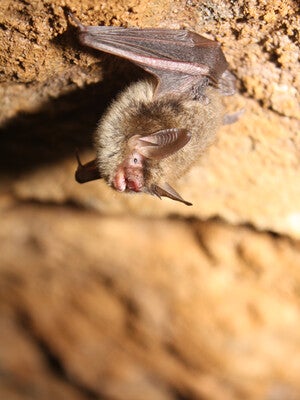 The Wisconsin DNR said hundreds of long-eared bats were once documented during winter surveys, but now less than a dozen have been seen statewide each year.
Photo courtesy of Wisconsin DNR

Boyle said they've only found a small handful of northern long-eared bats each winter during surveys, which are currently underway. Less than a dozen bats are typically found each year statewide compared to hundreds in the past.

"So, 99 percent of the population in Wisconsin is just gone from white-nose syndrome," said Boyle.

The bats typically spend the winter in caves, abandoned mines, rail tunnels and even manmade caves once used to store beer.

"The fungus that causes white nose syndrome, it wakes those bats up over and over again throughout the course of the winter," said Boyle. "And so with no food to replenish the energy that they're using, the bats will often end up starving or dying of exposure."

The bats' population is also threatened by other factors, including climate change, habitat loss and wind energy development. The wind energy industry has developed 16 habitat conservation plans with more than a dozen other plans under development, according to the U.S. Fish and Wildlife Service.

During the rest of the year, the bats spend their time foraging and roosting in forested habitat. They often roost alone or in small numbers and emerge at dusk to feed on insects and pests that often affect trees and crops. One study estimated the loss of bats facing increasing pressures from white nose syndrome and wind developments could cost agriculture more than $3.7 billion each year.

Wisconsin listed the long-eared bat as a state threatened species in 2011, and the U.S. Fish and Wildlife Service listed the species as threatened in 2015.

The Center for Biological Diversity sued the federal agency, challenging the designation. Ryan Shannon, an attorney for the conservation group, said the 2015 listing included a special rule that exempted activities that threatened the bat’s habitat.

"They largely exempted all activities that affected bats’ habitat, such as mining or timber sales and logging," said Shannon. "And so, we challenged that in court, arguing that the bat based on the best available science should have been listed as endangered."

Multiple groups filed a brief in that case to support the agency listing the species as threatened, including the Great Lakes Timber Professionals Association, American Farm Bureau Federation and Forest Landowners Association.

A federal judge sided in part with the conservation group last year, ordering the agency to determine whether the bat should be listed as endangered by the end of this year.

In its review, the U.S. Fish and Wildlife Service found white-nose syndrome is expected to affect the bats' entire range in the U.S. by 2025.

A public hearing will be held about the proposed designation on April 7. The agency is accepting comments on the proposed rule until May 23, and a final decision will be announced in November.