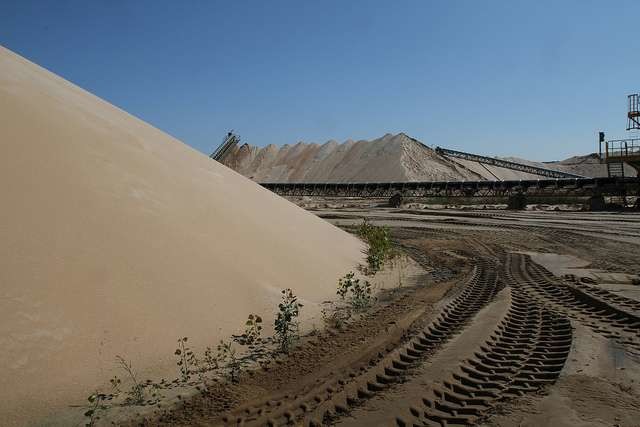 Despite Record Demand For Frac Sand, Wisconsin Mines Shutting Down, Laying Off Workers

Frac sand mines in Wisconsin are idling operations and laying people off despite a year of record demand for sand used to drill for oil and natural gas.

Hi-Crush Proppants, Superior Silica Sands and Covia have announced they are scaling back production and cutting staff due to a changing frac sand market.

Hi-Crush Proppants shuttered its sand drying facility in Whitehall and laid off 37 employees Sept. 28. In a letter to the Wisconsin Department of Workforce Development, Hi-Crush general counsel Mark Skolos wrote the move was due to "unforeseen business circumstances."

"We have no choice but to halt production at our Whitehall plant due to Industry wide conditions related to the drastic decrease in demand for sand and the derivative impact of these pressures on the sand industry," wrote Skolos.

On Sept. 26, Covia announced it was shutting down mines across the Midwest including it’s operation in Menomonie due to "light market dynamics." In a press release, Covia CEO Jennifer Deckard wrote, "The idling of these facilities is a difficult, but necessary step, and we regret the impact that this has had on our people, their families and the local communities."

In an interview with WPR, Superior Silica Sands CEO Rick Shearer said his company is laying off 20 employees at its sand drying plants in Wisconsin mainly due to an influx of new sand mines in Texas.

Over the last two years, 15 new sand mines have begun operation near an oil-bearing shale formation known as the Permian Basin located in west Texas and eastern New Mexico. It’s home to the busiest oil fields in the United States and accounts for around 50 percent of the national demand for frac sand.

Shearer said because energy companies can get Texas sand at a fraction of the cost of shipping it from Wisconsin, they're using more local product.

"With the economics the way they are now and competing to some degree with in-basin sand, the prices for 'northern white' have been dramatically reduced," Shearer said. "That means that our margins are going to be suppressed substantially.”

He said Superior Silica is focusing on building its customer base at oil fields in western Canada, North and South Dakota, Utah, Wyoming and Colorado.

"We’re all scrambling to make that happen," said Shearer. "This doesn’t happen overnight. So, it does mean throttling back operations in our case and I think in most of our competitors’ case for producers like us in Wisconsin."

Kent Syverson, chair of the University of Wisconsin-Eau Claire Geology Department, says while Texas sand has taken most of the market share in the Permian Basin, some companies still use Wisconsin sand for specific applications due to it’s roundness and ability to resist extreme pressures. But Syverson echoed Shearer’s sentiment that Wisconsin frac sand companies are best served developing basins across the northern half of the U.S. and into Canada.

"So, the real question is how does demand hold up or increase in places like the Bakken, Canadian Prairies, Marcellus," said Syverson. "Because in those areas northern white sand is still cost advantaged and there is no way they can put lower quality Texas sand onto a train and bring it up to Bakken for less than what Wisconsin sand can go out there."

Samir Nangia, a director of energy consulting at analytics firm IHS Markit, agrees with Syverson and Shearer, saying the U.S. frac sand market as gone through dizzying changes over the last few years. Nangia said while mines in Wisconsin returned to operation after a two-year lull in 2015 and 2016 they may be destined for mothballs again.

"There’s probably a whole bunch of mines that had reopened because they just made money right now," Nangia said. "But they’ll probably need to shut down. So, unfortunately it does sound like it will be a little dire for Wisconsin sand for some time to come."