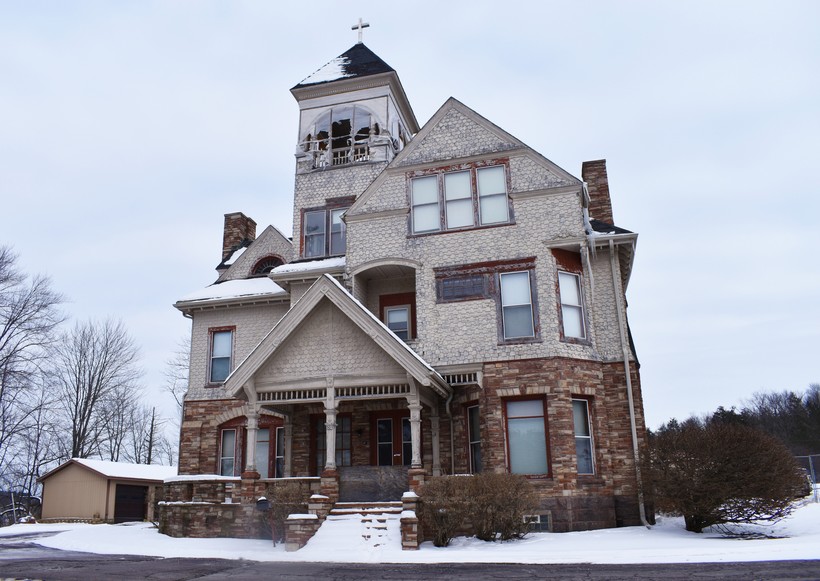 The T.B. Scott Mansion in Merrill, built in 1888 by the city's first mayor, could be demolished this month. Rob Mentzer/WPR

A 19th century mansion built by the lumber baron founder of Merrill appears headed for demolition despite a public outcry and last-minute efforts to save it.

The T.B. Scott Mansion is owned by the Ascension health system and sits just next to the Ascension Good Samaritan Hospital in Merrill. The historic building has been a private home; a convent for the Sisters of Mercy of the Holy Cross; a dormitory for the Holy Cross Junior College; and office space for the hospital. But it’s been vacant since 2005, and has fallen into disrepair. Last week, the Merrill Foto News reported Ascension received a demolition permit from the city.

That news caught many in the Lincoln County city of about 9,000 people by surprise. More than 2,100 people have signed an online petition asking Ascension to spare the building, and more than a dozen people spoke at a hastily organized meeting of the city’s Historic Preservation Committee on Wednesday.

At that meeting, Merrill Mayor Derek Woellner advocated for taking steps to designate the building as a historic landmark, even as he said the maneuver stood little chance of success.

"I don't want to give anyone false hope," Woellner said at the meeting. "Even if the committee designates this building, it will likely be too late."

The demolition permit is good for 45 days.

A spokesperson for Ascension declined to say whether the community response would influence the health system’s decision. In a statement to WPR, Ascension's chief administrative officer Jonathon Matuszewski said the company "will focus on a plan to decommission the Mansion in a manner that acknowledges the significance of the building and its importance to the area by preserving essential architectural elements and artifacts."

One obstacle for those trying to persuade Ascension to change course is the fact that the health system is in the process of exiting Merrill. In January, the St. Louis-based Ascension signed an agreement to sell seven Northwoods hospitals and nearly two dozen of its clinics to Wausau's Aspirus Health. Ascension Good Samaritan Hospital is part of that sale.

"I'm not sure that we have much leverage given the condition that the building is in, and given that they've shown us already that they're not going to do anything," Historic Preservation committee member Elizabeth McCrank said at Wednesday's meeting. 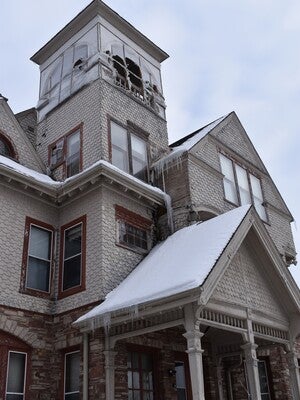 Plans outlined in 2018 by owner Ascension Good Samaritan Hospital to make repairs to the T.B. Scott Mansion in Merrill appear not to have been completed. Rob Mentzer/WPR

In 2018, Merrill's city administrator discussed the property's future with Ascension officials. The Wausau Daily Herald reported they discussed options for selling or relocating the property. That fall, the Historic Preservation Committee considered and rejected the possibility of designating the building a historic structure. But the city did secure a letter from Ascension that outlined plans by 2021 for lead paint abatement, repairs to the siding, shingles and cupola, and other improvements, according to the Merrill Foto News. Few if any of those improvements appeared to have been completed.

Keith Boyce is a registered nurse who’s lived most of his life in Merrill and worked for decades at the Good Samaritan Hospital. He got to tour the mansion and was fascinated by its connection to local history.

"The building itself is merely a building," Boyce said. "But it does represent a lot of the forefathers that we had in the area, whether it be the miners, the badgers, the river rats, the lumbermen who worked at the time. They're the ones that built the mansion."

The mansion was to have been home to Thomas Blythe Scott, a Scottish-born lumber mill owner and onetime state senator who became Merrill's first mayor in 1883. It was under construction when Scott died in 1886, and was completed in 1888. In Merrill, it has long been the subject of local lore and ghost stories. One of its caretakers is said to have died on the Titanic.

It's also widely believed in Merrill that when the Holy Cross Sisters agreed to sell the building to the hospital, they did so on the understanding that it would be preserved. A statement issued Friday by Sister Pat Cormack challenges that understanding.

"We have researched all our written records regarding the sale and have found no evidence that ... Good Samaritan Hospital made any agreement to preserve the mansion," Cormack said. "The sisters who served in leadership at the time of the sale have no recollection of such a commitment."

Still, Merrill residents like Boyce had hoped the historic building could be renovated and opened to the public again.