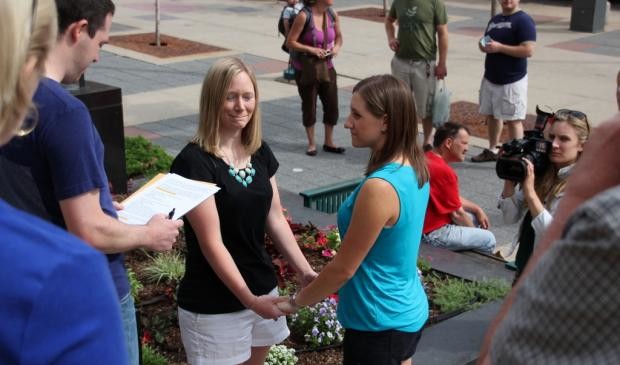 A couple getting married by the Dane County clerk after Wisconsin's same-sex marriage ban was struck down in 2014.

New Bill Would Change Statutory Language Regarding Parental Rights And Taxes, Among Other Things
By Shawn Johnson
Share:

A group of Democratic lawmakers say it's time to update Wisconsin's laws to make sure same-sex couples have the same rights as traditional married couples.

Most of Wisconsin's laws were written before the U.S. Supreme Court's decision that let same-sex couples legally marry. For example, state law is full of references to "husband" and "wife" that same-sex couples say can make life difficult.

A plan by Democrats would change those gender-specific references to "spouse."

"It is wholly unfair that same-sex couples are forced to pay the significant costs associated with legal action to get a declaration of their rights, especially rights involving their children," said Spreitzer.

At a state Capitol news conference supporting the plan, Jamie Gaffke said she and her partner Ruth went to court to assure parental rights for their child.

"In order to protect the security of our family, we spent thousands of dollars — thousands of dollars that could have gone into our child's education fund, deferred maintenance to our house, any number of other things," she said. "We spent that money, and that time and that stress and that effort, to secure Ruth's legal parental rights."

The changes would also affect other areas of state law, from how couples file their income taxes to their eligibility for joint fishing licenses.