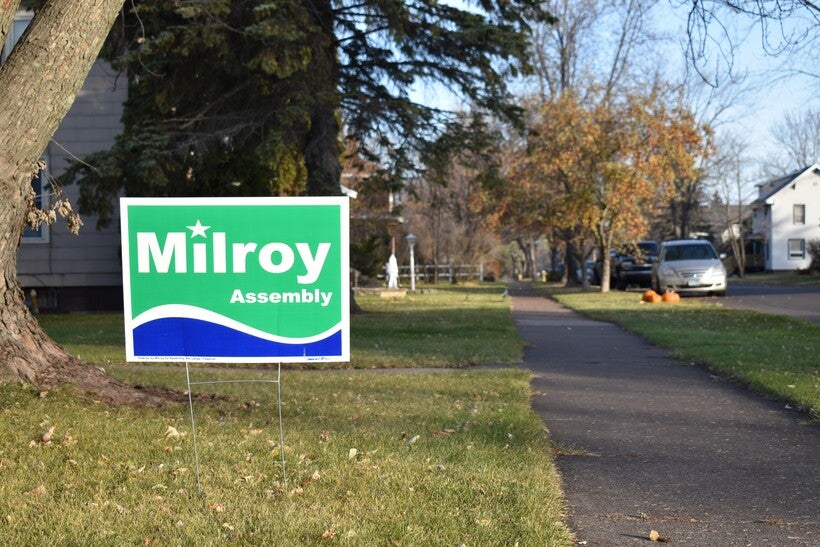 The closest race for a seat in the Wisconsin Legislature took place in far northern Wisconsin between Assembly Democrat Nick Milroy and Republican challenger Keith Kern. The district has long been a Democratic stronghold in the region.

A Democrat has held the 73rd Assembly District seat for more than three decades. Milroy, of South Range, has held the seat since he was first elected in 2008 after former State Rep. Frank Boyle retired. Milroy hadn't faced a Republican opponent in the district since 2010. On Tuesday, the incumbent was elected to his seventh term in office by just 139 votes.

"Trump had a huge amount of support, especially in the rural areas, and that really dragged down the numbers," said Milroy. "But there was a huge turnout for both Republicans and Democrats."

Kern, a businessman and president of the Superior Douglas County Tavern League, performed better than Milroy in rural Burnett and Washburn counties. Trump won by 23.8 points in Washburn County and 28.5 points in Burnett County — slightly higher margins than in 2016.

Biden and Milroy carried Douglas County — home to the city of Superior — with 53.7 percent and 53.8 percent of the vote respectively, performing better than Democratic presidential candidate Hillary Clinton in 2016.

Milroy said Democrats need to do a better job of reaching rural voters and addressing issues important to them. He said people in northern Wisconsin care more about "meat and potato" issues, such as good paying jobs, whereas the party is focusing more on social issues in urban areas.

Wisconsin, like much of the nation, is witnessing a rural and urban divide, said Alisa Von Hagel, associate professor of political science at the University of Wisconsin-Superior. Urban areas like Dane and Milwaukee counties turned out big for Biden while Trump saw less sustained turnout from Republicans compared to 2016 in suburban areas like Ozaukee and Waukesha counties. But Trump gained ground in rural areas of northern and central Wisconsin.

Von Hagel said it's too early to tell what determined the close race between Milroy and Kern, but she feels coronavirus played a role in the outcome.

"Coronavirus was seemingly the primary issue that really was most important or most defined the two candidates," said Von Hagel. "So that, no doubt, I would believe has really explained a lot of the closeness in this particular race, which also has affected races from the presidential level on down."

Milroy said the pandemic was a big issue among voters who saw Republican lawmakers challenging the governor's orders on things like wearing a mask and capacity limits for businesses.

"I was messaging that we have to take drastic measures to stop the spread statewide and get our economy back on track," said Milroy. "I think those people voted for me, but I think on the same side, there's a large number of people that buy into the misinformation that's been spread by the president."

Yet, Kern feels the outcome is more about people looking for a change down in Madison "because northern Wisconsin is kind of forgotten." Yet, he acknowledged the pandemic was among voters' concerns.

"We got to take it serious, but, at the same time, we have to be able to kind of make sure that our economy is still going," said Kern.

Kern was the lone Superior city councilor who voted against a resolution requiring people to wear masks prior to Gov. Tony Evers' mask mandate. The businessman has said he supports wearing masks, but felt it would make businesses tougher to operate during the pandemic.

Kern said he spoke with many voters who were out of work during the governor's stay-at-home order, adding the state's unemployment insurance system failed them. Evers fired state Department of Workforce Development Secretary Caleb Frostman in September amid a backlog of unemployment claims. Democrats and Republicans have blamed each other for the failure to address the outdated unemployment system, which has left some residents waiting for months without a payment.

Milroy declared victory Wednesday, although Kern hasn't conceded the race. Kern said he'll decide whether to request a recount once the official election results have been released after the canvassing.

"It's too close right now to not continue to fight," Kern said. "We fought this whole entire election and this whole entire campaign to get our voice out there. I want to finish it, knowing that I did everything I can possibly do."

Rep. Beth Meyers, D-Bayfield, also won reelection by 1,000 votes in a tight race against Republican businessman James Bolen for the 74th Assembly District. Democrats have also held that seat since 1986. The race was the closest yet for Meyers, who was first elected in 2014.

Meyers said she wasn't surprised by the close outcome after Trump carried many counties in the district during the 2016 presidential race.

"We've been gearing up for this election all along, and two years ago with the mid-term, some Democrats didn't do as well as we expected. The numbers weren't there," said Meyers. "So that really put us into high gear."

She added that COVID-19 or access to health care was the number one issue among voters she reached during the race.

Meyers performed better than Bolen in Douglas, Ashland and Bayfield counties, which were carried by Biden. But she also won against Bolen in Vilas County, which voted for Trump by nearly 22 points. The district contains a portion of the county surrounding the Lac du Flambeau reservation.

On the pandemic, Bolen had focused on the economic impacts to small businesses during the shutdown and the need for legislative support to help them recover.

Bolen didn't return a request for comment Thursday. In a message to voters on Facebook, Bolen thanked his supporters and said he was humbled by the opportunity to run. Bolen lost a bid against Sen. Janet Bewley, of Mason, by around 1,600 votes in the 2018 race for the 25th Senate District.