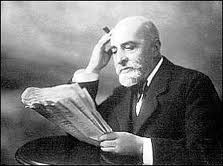 When violinist Leopold Auer was a little-known Düsseldorf concertmaster, he managed to line up a performance in Wiesbaden, a big step toward a solo career. With new confidence, he put up in one of the town’s best hotels and wasted no time going to the casino, where he ran into an acquaintance, the famous violinist Henri Wieniawski.

Wieniawski confided to Auer that he had a sure-fire gambling system. He and Moscow Conservatory director Nikolai Rubinstein had come from St. Petersburg and had recently worked the system in Caen, with such certainty that he expected to break the casino at any moment. He and Rubinstein had pooled their money, and since Rubinstein was the cooler-headed of the two, he was doing the actual gambling.

The two planned to go on to other cities, where they would make a good deal more money gambling than they could by concretizing. No longer would they have to spend all that time practicing.

Wieniawski had also decided that his new vein of wealth would enable him to devote his spare time to composing, and that he could afford to play just for his own pleasure.

For the next several days the system worked so well that the two invited Auer into their arrangement, and, looking forward to shedding the drudgery of practicing scales, Auer gladly gave them his money.

As the cash rolled in, they lived in light-hearted luxury, and Auer considered quitting his job in Düsseldorf so that he could settle down near the casino, where he could live off the system, while accepting only a few select highly-paid performance engagements.

Then he and Wieniawski encountered Rubinstein out for a walk. He was so crestfallen that even his cigarette seemed to droop.

“It’s all over,” he said with characteristic calm. “I lost all of our capital in a few turns of the wheel.”

After a dinnertime consultation, the gamblers decided to go their separate ways and resume their former occupations.