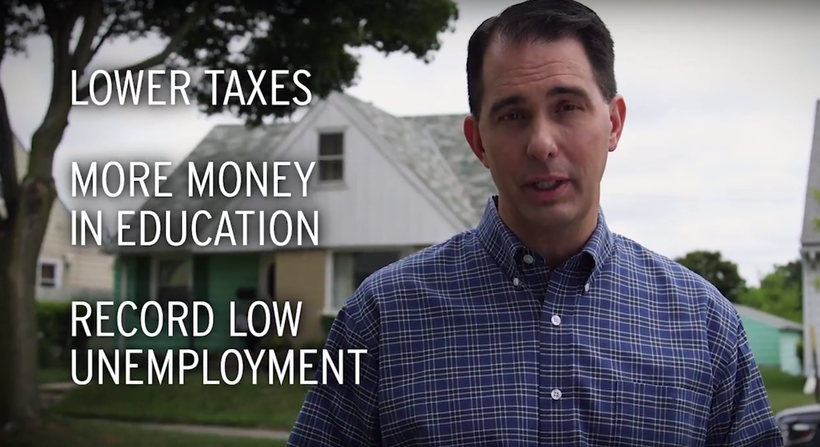 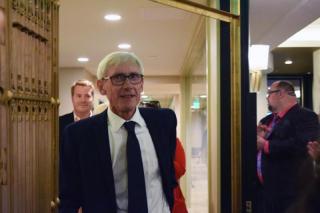 Walker unveiled outlines of proposals and a new ad on Wednesday morning, the day after the primary. Walker is seeking a third term.

The governor is calling for a new $5,000 credit over five years for college graduates who live and work in Wisconsin as a way to reduce college loan debt. He's already called for extending a University of Wisconsin tuition freeze for four more years.

He's also proposing a tax credit program to help senior citizens afford to live in their homes. He did not immediately release details of what that would cost. Walker also wants to expand apprenticeships available to middle school students.

Walker said he will also propose a tax credit designed to lower child care costs and continue a back-to-school sales tax holiday. At a campaign event at J&D Manufacturing in Altoona, Walker said his plan will keep the state's economy moving.

"All of those things are critical things about how we want to keep Wisconsin working for generations to come," said Walker. "We’ve had now five consecutive months, hopefully soon to be six months of sub-3 percent unemployment. We’ve got more people in the workforce than ever before, and we’ve got more career opportunities than we have unemployed people to fill them."

Walker said the tax breaks would be paid for by increased revenue from the state's growing economy.

"He's had all sorts of promises he hasn't kept for the past eight years," Evers said of Walker. "Whatever he's proposing right now pales compared to the destruction he's done."

Evers will try to capitalize on his even-keeled demeanor and background in education as a former teacher, superintendent and now state schools chief to do something no Democrat has been able to achieve in 28 years — beat Scott Walker.

On Wednesday morning, Evers kicked off his first day on the campaign trail with the Democratic lieutenant governor nominee Mandela Barnes, a former state Assembly member, at Mickie's Dairy Bar in Madison.

Good morning from Mickie’s Dairy Bar in Madison, where the newly minted Dem gov and lt. gov candidates are kicking off their first day on the campaign trail. pic.twitter.com/JxH4f1xhCq

While Walker has said he plans to run an "optimistic" campaign focusing on the positive things happening in the state, the Republican Party of Wisconsin released an attack ad against Evers for not revoking the license of a Middleton-Cross Plains Area School District teacher who was caught watching pornography in the classroom. Walker said the attack ad is warranted because Evers' Democratic primary challengers and the media haven't held Evers accountable for his role in the matter.

"At the time the school district, parents, others in the community asked him to revoke the license," Walker said. "He didn’t even try to do that. So, this is just pointing out the facts," Walker said. "He had an opportunity to stand up and take action that would have revoked the license of a teacher who was watching pornography in the classroom, showing it to other teachers who were offended by that."

Evers has defended himself in the situation and has pointed out that he did revoke the teacher's license.

"We had a very difficult situation, we did that (license) revocation by state law, and we changed state law so it fixed that loophole. Simple as that," Ever said. "I was following state law as a constitutional officer — that's what the people of Wisconsin expected of me as state superintendent. These type of attack ads are ridiculous, but we should expect it. He's going to go on and on about this. It's going to be carpet bombing."

Republican Rebecca Kleefisch is running for re-election as Wisconsin's lieutenant governor; she won an uncontested primary Tuesday. Walker has not lost an election in Wisconsin since his first run for the state Assembly as a 22-year-old in 1990. He's been in elected office since 1993. Walker failed in his run for president in 2016.

Democrats are optimistic that this year represents the best shot they've ever had at taking out Walker as polls show a favorable climate.