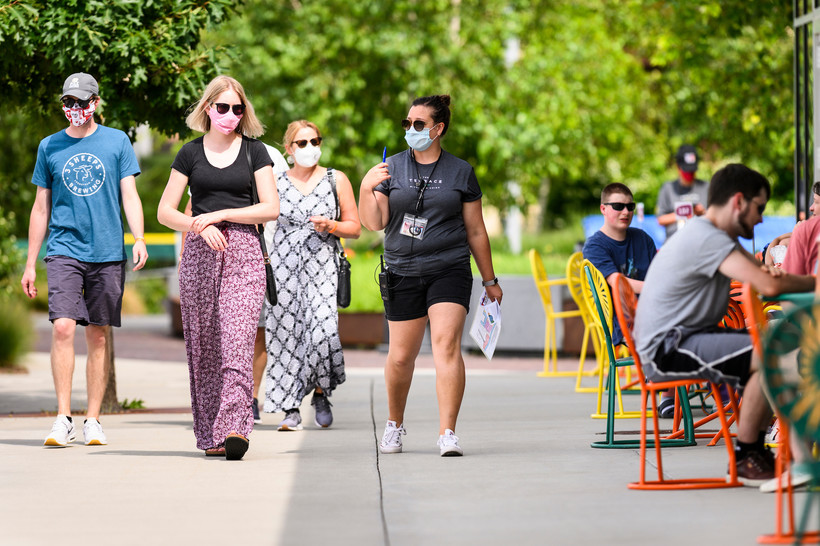 A Wisconsin Union staff hostess walks patrons to their assigned table to enjoy physically distanced, reserved-table seating with food and drink service at the Memorial Union Terrace at UW-Madison during the summer. On Sept. 7, Chancellor Rebecca Blank directed students to limit their movements on campus because of a growing number of coronavirus cases. Jeff Miller/UW-Madison

Dane County Executive Joe Parisi is asking the University of Wisconsin-Madison to send students living in residence halls home after the campus has reported more than 1,000 positive cases of COVID-19.

In a letter sent to UW-Madison Chancellor Becky Blank, Parisi expresses "deep concern" with recent increases in cases of COVID-19 at the university. Parisi said the campus's "nearly 1,000" cases are resulting in record numbers for Dane County.

"New daily infections are the highest they've been since the start of this pandemic," said Parisi. "New cases in the past few days are running at least five times what they were in late August. Since September 1st, at least 74 percent of Dane County's new COVID positive cases were from the UW."

Parisi goes on to ask UW-Madison to require undergraduates living in dormitories to move back home for the rest of the semester and quarantine for 14 days to prevent outbreaks in their hometowns. If the university administration decides not to, Parisi said, he encourages them to increase staffing to ensure students comply with local public health and UW-Madison health directives requiring face masks, social distancing and limits on social gatherings.

Parisi also suggested UW-Madison increase the number of on-campus quarantine facilities to avoid infected students going back into "group living situations off campus," and to triple the number of university contact tracers.

In an interview with WPR, Parisi said the number of new cases is overwhelming the university's contact tracing capacity.

"It's already kind of outpaced what the UW had put in place and now it's falling on Dane County's infrastructure," he said.

Parisi said the spread of COVID-19 at universities around the U.S. shows that campuses should not have brought students back to campus.

"The best call would have been for universities and colleges to begin virtual this year," said Parisi. "This disease has not gone away. It's not become any less contagious. And what we're seeing now is outbreaks in university towns across the nation."

In a statement emailed to WPR, Blank said that she and Parisi share similar concern for the health of UW-Madison students and the residents of Dane County, which is why the campus instituted a "robust testing regime."

"It’s the university’s goal to be a partner with the city and county and not unduly strain limited resources," wrote Blank. "To be clear, we have created significant testing capacity on our campus, which has had available slots every day for members of the campus community. It is also why we have hired, and continue to hire dozens of contact tracers, and have set aside more than 1,000 spaces for students in need of isolation or quarantine."

Blank said the university administration will continue evaluating campus operations "in light of this changing situation."

On Wednesday, UW-Madison reported a total of 1,070 positive cases of COVID-19 among students and employees since July 28. Most of those positive tests have come from students testing positive after Aug. 31.

On Monday, Chancellor Blank directed all undergraduate students to restrict their movements over the next two weeks in hopes of reversing the spike in COVID-19 cases on campus. Undergrads have been asked to stay in their dorms or apartments unless receiving a COVID-19 test, going to in-person classes, buying food, going to work or attending a religious observance.

Blank's directive followed an announcement on Friday that hundreds of members of nine campus fraternities and sororities were told to quarantine in their Greek life houses after 38 tested positive.

On Aug. 24, just before UW-Madison students began moving into residence halls, 28 members of the Dane County Board of Supervisors, the Madison Common Council and Madison Metropolitan School District sent a letter to Blank calling the decision to bring tens of thousands of students back to campus for in-person classes amid the pandemic "shocking." The local officials called for moving nearly all campuses online and limiting residence in dorms to those without other safe alternatives.