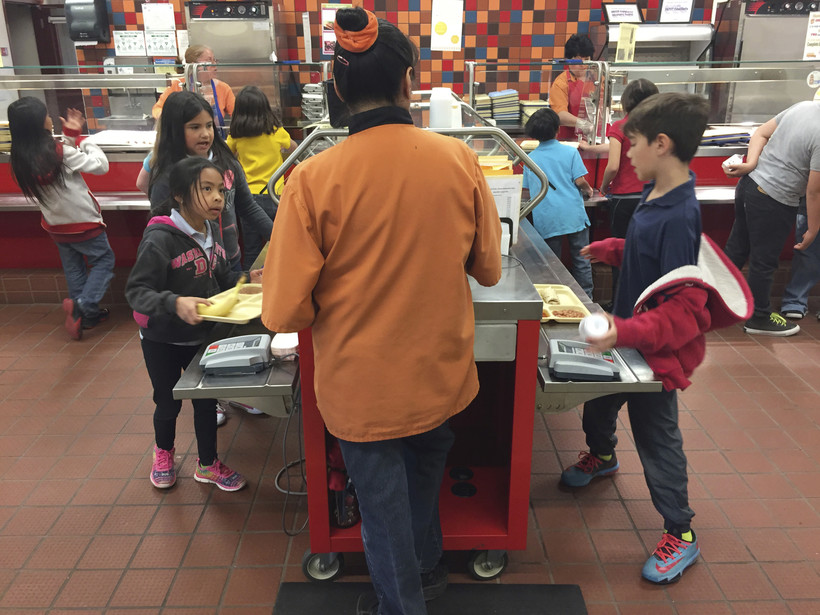 In this Thursday, May 4, 2017 photo, second grade students Angelina Lopez, left, and Nasim Hamdouni, right, enter a student account code to track lunch purchases at Gonzales Community School in Santa Fe, N.M. All students are offered the same lunch at Gonzales and other Santa Fe public schools to avoid any chance of embarrassing students whose parents may have fallen behind on meal payments. New Mexico in April became the first state to outlaw the shaming of children for any unpaid meals. Morgan Lee/AP Photo

While a bill to protect students from "lunch shaming" works its way through the state Legislature, the city of Cudahy is considering changing its policy to do the same.

Last month, resident Shawn Bumgardner paid off all the student lunch debt at Cudahy Middle School, where his daughter goes to school.

After receiving a notice from the district saying students who had unpaid lunch balances would be served an alternative lunch meal of peanut butter sandwiches and milk, Bumgardner paid about 30 bills totaling $173.21.

"I found the policy to be archaic," Bumgardner said. "We’re not talking about thousands of dollars stopping our children from getting a regular meal, and that was even more concerning to me."

Bumgardner began petitioning the school board to change its policy.

"There are children, through no fault of their own, whose parents live in poverty or don’t put money in their accounts," he said. "This should not be used as leverage. I can’t imagine a child in school whose peers are served a hot meal and they are served a peanut butter sandwich and all their peers know why they are served the sandwich."

The school board is considering a proposal to end alternative meals for students with negative balances. The superintendent is planning to provide the school board with an annual report on delinquent food service accounts and the efforts being taken to clear up negative balances. The board met Monday for its first discussion of the changes and will vote on the issue next month.

"This makes me extremely happy," Bumgardner said. "Board members stepped up to the plate and did what is right by our children."

About 60 percent of the district’s 2,300 students receive free or reduced lunch. The remaining 40 percent are private pay. Those are the students affected by this policy, said Superintendent James Heiden.

Heiden said it was never the district’s intention to "lunch shame" students. Heiden said the district will adopt the new policy, but he does not know how it will go about collecting the money from parents who refuse to pay.

"I don’t mean to sound antagonistic, but our policy was not unlike any other school districts," Heiden said. "(Families) generally ended up getting themselves in arrears."

The Wauwatosa School District changed its policy last year. When students whose accounts had a negative balance were given an alternative lunch, the district’s deficit was $2,000.

At the end of this school year, it was more than $20,000, said John Mack, the district’s director of business services.

"What stops the snowball effect where everyone says, 'If they are not paying, why should I pay?' and that could be the biggest problem of stopping this free alternative meal," Mack said.

The district is looking at various options for the 2019-2020 school district, including adding several options including a low-cost option every day. Students who have a deficit would not be allowed to chose and assigned the lower cost option.

"We don’t want the stigma, I do understand that, but at the same time, it is a very difficult thing because do you make the taxpayers pay for the kids' lunch?” Mack said.

Meanwhile, a bipartisan group of lawmakers are seeking to ban schools from requiring students to work when accounts are in arrears or dumping student lunch trays. The bill would also require districts to only communicate with parents about lunch accounts. The bill had its first public hearing on May 30.

State Rep. Gary Tauchen, R-Bonduel, who introduced the bill, cited examples of Wisconsin students allegedly being singled out in lunch lines for lack of fund including in the Hamilton School District in Waukesha County and the Stanley-Boyd School District in Chippewa and Clark counties.

In the state’s largest school district, Milwaukee Public Schools (MPS), every student is eligible for free breakfast and lunch. MPS serves for more than 50,000 lunches every school day and served 15.6 million school breakfasts and lunches during the 2017-18 school year, according to a district spokesman.