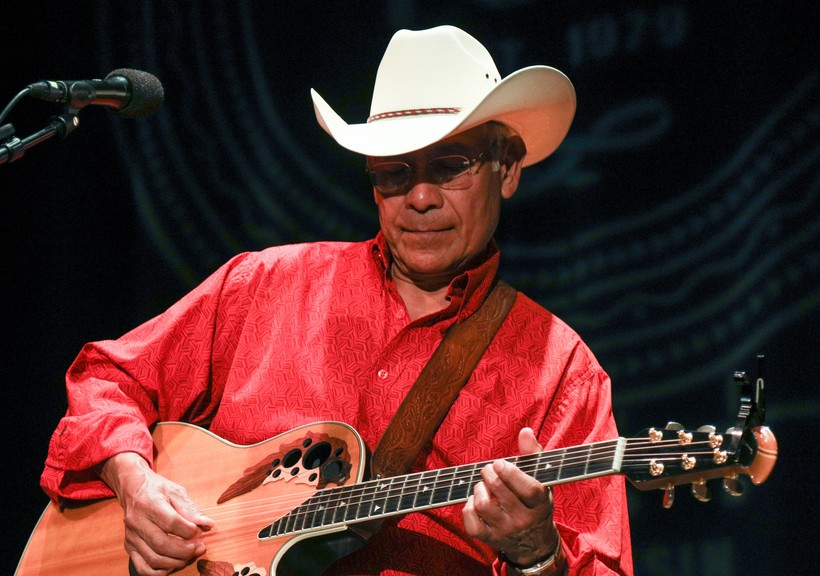 Cris Plata Plays His Music At The Crossroads

Plata's Song, 'Moonlight Walkabout,' Is The 'Simply Folk' Download Of The Month For October
By Dan Robinson
Share:

Cris Plata is an embodiment of a musical crossroads, having grown up traveling with his family around the United States as migrant farmers. And those travels exposed him to music that melded with the traditional Mexican music that he grew up with.

"We had a small radio but a lot of the places that we went to, there was no Mexican music that we could dial into," Plata said. "So, we would go up and down the dial and listen to some of this strange music, and I’d ask my dad what it was. And he goes, 'I don’t’ know, but it sounds good!'"

In March 2015, Plata and his wife and bassist Ann Plata were in WPR’s studio for an interview and performance, and during that appearance, they shared the song, "Moonlight Walkabout," which originally appeared on Plata's album, "Migration Road." The song is also now included on Simply Folk’s 40th anniversary collection.

"Moonlight Walkabout" is a moving portrait of being out in the countryside at night:

Feel the moon pulling you tight

Calling you out and into the night

Into the darkness away from the light

On your moonlight walkabout

On your moonlight walkabout

Brother coyote calls in the pine

Howls at the heavens to give him a sign

So he can go dancing into the moonshine

On his moonlight walkabout

On his moonlight walkabout

The song also reflects the different influences that Plata has incorporated into his music. This song has traditional American folk and singer-songwriter influences and incorporates imagery from the west and southwest United States.

Plata's travels as a young boy meant leaning on family for support and even entertainment. At the end of the day, they would break out the guitars and sing together, often trying the songs that they heard on the radio that day.

"I’d be watching them to see how they played, where they put their fingers and everything," Plata recalled. "It laid down the musical foundation for me, which was my Mexican roots music, because in that genre there's a lot of different styles. There's Huapangos, there’s Huastecas, there’s Conjunto music, there’s Norteño music. So everybody always thinks that, you know, when you say Mexican music it's like Mariachi ... but there's a lot of folk styles in it. And my father was pretty well versed in a lot of these musical styles and he passed them on."

These different styles of Mexican music also have similarities to musical genres north of the border as well, like bluegrass music.

"There’s a style in northern Mexico from the state of Nuevó Leone," Plata added, "where it’s nasally high singing, and so the high lonesome sound (of bluegrass) really lends itself to that, too."

These similarities are born out of shared heritages, with the Mexican tradition putting its own accent on them.

"The Conjunto style in south Texas is strictly out of the German, Polish, and Czechoslovakian songbooks because they brought the accordion over and they brought all their musical styles. And all the Mexicans did was they incorporated a little bit of Ranchera music, which is their country music, into it," according to Plata.

"They absorbed it all and then they came up with this style that they call Conjunto music which now in the modern music they call Tex Mex," Plata said. "The only thing that they did is, the Germans and the Polish and the Czechoslovakians don't play quite as many jazzy chords and the Mexicans just decided that they're adding all these crazy jazz chords."

Whether walking on a moonlit night or traveling around the country, Plata’s music continues to show the crossroads that is American roots music, and the beautiful results that can happen when those musical styles cross.