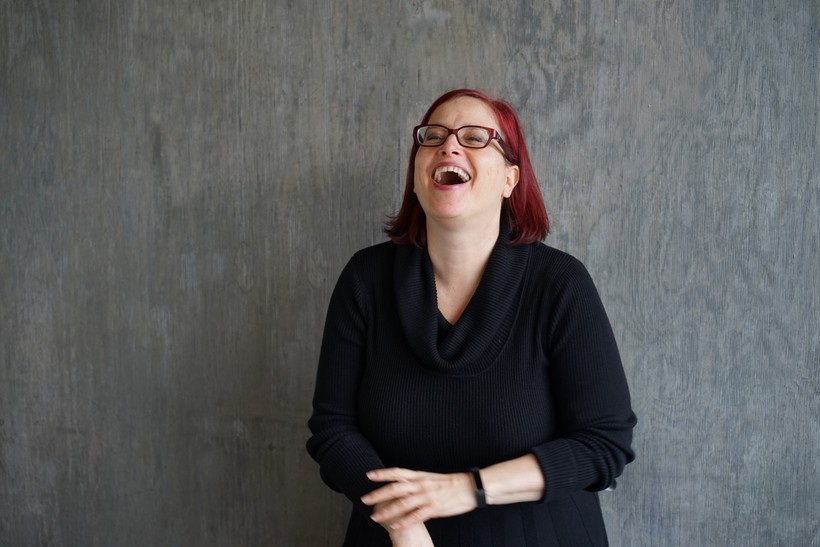 Courtenay Hameister Conquers Her Fears — Well, A Lot Of Them — With 'Okay Fine Whatever' Project

Courtenay Hameister has struggled with anxiety and obsessive-compulsive disorder for a long time. Her OCD is known as "harm-focused." People with this condition convince themselves they’ve done something terrible, even though they haven’t.

Hameister writes about her mental health struggles in a memoir called "Okay Fine Whatever: The Year I Went From Being Afraid of Everything to Only Being Afraid of Most Things." Hameister also hosted the syndicated public radio variety show, "Live Wire!," for several years.

But one night in 2013 something happened.

"So on that Monday what I called my dread ball would arrive, and it would be this about the size of a golf ball maybe," Hameister told WPR's "BETA."  "And then as the week progressed, my dread ball would grow and it would sort of push out my breath. Because that’s what happens a lot when you have anxieties, you can’t take a deep breath and it feels like something’s blocking your lungs. And then by the Saturday, I would sort of be inside of the dread ball. Like it was this giant hamster ball I was walking around in. And it really dulls your vision of the world and it dulls your ability to take in information and to put out information because you’ve got this white noise essentially in your brain."

Hameister said that it was an unmanageable situation.

It was two days before the 9th anniversary show for "Live Wire!" and her dread ball turned into a massive OCD-infused panic attack. Afraid she was going to hurt her housemate, and walking around in a state of constant panic, she called her brother. She explained how obligated she felt to the show, and those counting on her — the audience, the show's staff and all of the stations "Live Wire!" aired on.

"He just gave me this look that really said it’s super adorable that you think you’re this important, but it’s gonna be OK and the world’s gonna keep turning. And you need to call your producer," she recalled.

So Hameister didn't host the show that night and she ended up giving up her hosting duties. She continued to work as the head writer for "Live Wire!." Then she came up with an idea that she called the "Okay Fine Whatever" project.

"I thought, what if I just did a lot of things that might scare me a little bit? Because I’d obviously pushed my boundaries too far by doing 'Live Wire!' for so long. What if I did smaller things?" Hameister said.

"Anxiety turns you into a pessimist. Anxiety just digs these ruts in your neural pathways that are so difficult to get out of," she continued. "You think about doing something and your brain immediately goes to it’s not gonna work or here are the 12 terrible things that are gonna happen, you know, right? This is what anxiety does to you. And I didn’t think that I would turn into an optimist. I really would have loved to. But I just thought maybe I can not think that everything’s gonna be terrible."

Of course before she could undertake the project, Hameister had to draw the line as to which uncomfortable experiences she'd be willing to undertake and which experiences would make her too uncomfortable. She wanted the experiences to challenge her, but not push her into full blown panic.

"I absolutely didn’t want things that actually put me in physical peril because I knew that that was way beyond my comfort zone," she said. "If my comfort zone was in Oregon, I didn’t want to go all the way over to New York. I wanted to be, actually, maybe around Wisconsin, frankly. Right? So, I wanted sort of Wisconsiny experiences."

Among the experiences she felt that she could stomach were spending an afternoon in a sensory deprivation tank, having a session with a professional cuddler and going on 28 first dates.

How Hameister kept track of all of those dates? She created a spreadsheet.

"I thought if I approach this scientifically, then my brain’s not going to fail me or my heart’s not going to be quite as involved. I’m going to be a scientist about this and just kind of look at the facts and the numbers," she said. "I had all these categories like 'my attraction to him,' 'his attraction to me.' One of them was 'loves to talk about ideas,' 'has a job he’s passionate about.' And a couple of months into it, I put 'has a car.' I think you got one point for a car and zero points for not a car. 'Great conversation' was one. And so I rated people from 1 to 10, I’m so sorry, but I did it in all of these categories."

She said that the experience that was the most successful in terms of getting her out of her comfort zone was her session with professional cuddler Samantha Hess.

"The idea of needing someone like that (a professional cuddler) is so intensely vulnerable. And that is part of the reason why I was trepidatious about it was that I have been single for the majority of my adult life. And I felt so much shame around that. And I felt so much shame around how much I needed to be touched," Hameister said. "I used to do breath work for 'Live Wire!' to sort of calm me down, and I remember lying on the floor with the person that I was working with and she touched my hand ... and I started crying because no one had touched me for so long."

"It’s this incredible reminder that you’re not getting what you want in your life. I think that seeing her made me realize that there’s not something wrong with me because I want physical affection, and I need it. I’m just human. I’m just a human being," she added.

For those who struggle with anxiety and OCD, Hameister has some advice:

"I believed that becoming more adventurous — and it’s not going to kill you — was sort of a muscle and I found that the more that I did it, the more comfortable that I got doing it," she said. "And that’s a lot to ask somebody who’s anxious, but I would say that that worked for me. Toward the end, I started going to a therapist who really started to teach me mindfulness. I find breathing magical so get an app, something like the Calm app ... people say, 'Don’t tell me to breathe.' They think it’s woo-woo. It’s not. It’s science. When you breathe deeply into your diaphragm and those muscles push out in your belly, there are chemicals that are released that tell your brain that everything’s OK," she said.

Adding, "and mindfulness, the reason that we are anxious is that we are freaked out and full of shame about past mistakes that we made that we can’t let go of and we are terrified of the future. We are living in the past and the future and it is driving us crazy literally. And what mindfulness does is it forces you to just be in the present moment and look at what is in front of me right now and can I deal with that?"