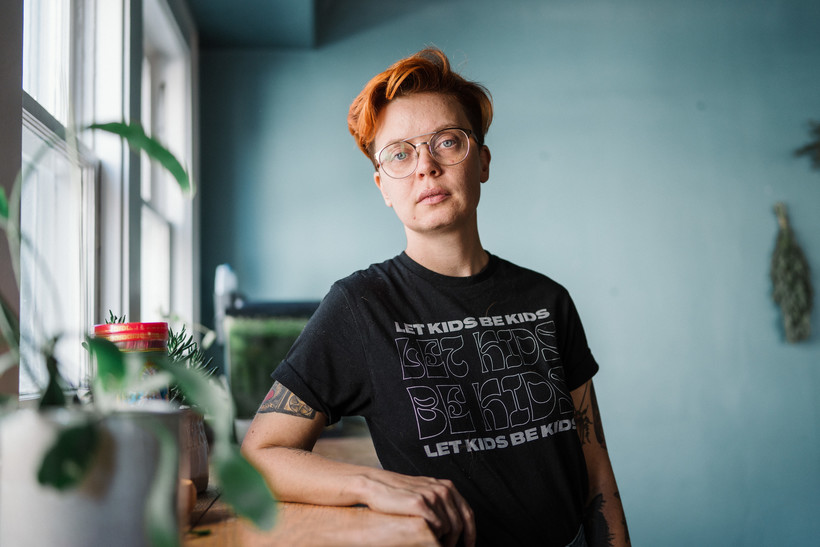 Editor's note: This story contains language and descriptions some may find offensive.

A former Milwaukee Public Schools counselor is suing after she says the district violated her free-speech rights by firing her over anti-transgender comments she made at a rally.

Marissa Darlingh is being represented by the conservative Wisconsin Institute for Law and Liberty, in the suit filed Wednesday in U.S. District for the Eastern District of Wisconsin.

Darlingh was fired on Sept. 30 from Allen-Field Elementary School after a period of mostly unpaid suspension following a speech she gave on April 23 at a rally in Madison, according to the suit.

In a video of the gathering posted to YouTube, Darlingh identifies herself by name and as a Milwaukee Public Schools elementary counselor and says "f--- transgenderism," among other comments.

"I oppose gender ideology ever entering the walls of my school building," Darlingh said while protestors yell in the background. "On my dead f------- body will my students be exposed to the harms of gender identity ideology. Not a single one of my students under my f------ watch will ever, ever transition socially and sure as hell not medically."

In a Sept. 30 letter notifying Darlingh of her termination, the district's Chief Human Resources Officer Adria Maddaleni wrote that the comments were "threatening, intimidating and abusive" toward students and the public and that they violated multiple district policies, including an anti-bullying policy and one that prohibits activity that significantly detracts from the district's reputation. The letter also said Darlingh violated standards from the American School Counselor Association on protecting the well-being of transgender and gender non-conforming youth.

Maddaleni is named as a defendant in the federal lawsuit, along with the Milwaukee school board, the district's Director of Employee Relations Therese Freiberg and Ophelia King, a school counseling manager who's described as Darlingh's direct supervisor.

In the lawsuit, Darlingh disputes a section of the termination letter, which says she "made clear (she) will not respect a transgender student’s wishes and use their preferred name and pronoun." Darlingh instead claims she explained she would "follow the parents’ lead as to a student’s names and pronouns, even if the student transitioned," the complaint says.

In addition to "blatantly" violating First Amendment protections, WILL attorneys say the district violated Darlingh's constitutional right to due process by not giving her sufficient notice before she was suspended from her job on June 14.

"As a private citizen, I have the right to express my views concerning gender ideology on my own time, and identifying myself as a school counselor doesn’t negate that right," Darlingh said in a statement Wednesday. "My speech had little to no impact on my students, their educational experience or our therapeutic relationship. The basis of my unscripted speech stemmed from my desire to protect children.”

But in a statement Wednesday afternoon, the district promised to defend Darlingh's firing through the legal process and called her comments counter to the school system's "commitment to provide a safe and supportive learning environment for all students."

"At a public rally, Ms. Darlingh identified herself as representative of MPS and declared her refusal to provide mental health services in her role as a school counselor," the statement said. "She proceeded to engage in a vulgar, insensitive, and disrespectful tirade aimed directly at the students in her care."

Along with any monetary damages, the suit asks that the district immediately reinstate Darlingh at her job with backpay.

Earlier this year, protestors marched from district offices to Darlingh's home and demanded she be fired. Within a week of Darlingh's April speech outside Wisconsin's Capitol, the state's Department of Public Instruction started an investigation into Darlingh's counseling license. A DPI spokesperson confirmed Wednesday the investigation is ongoing, but declined to comment further, citing confidentiality.