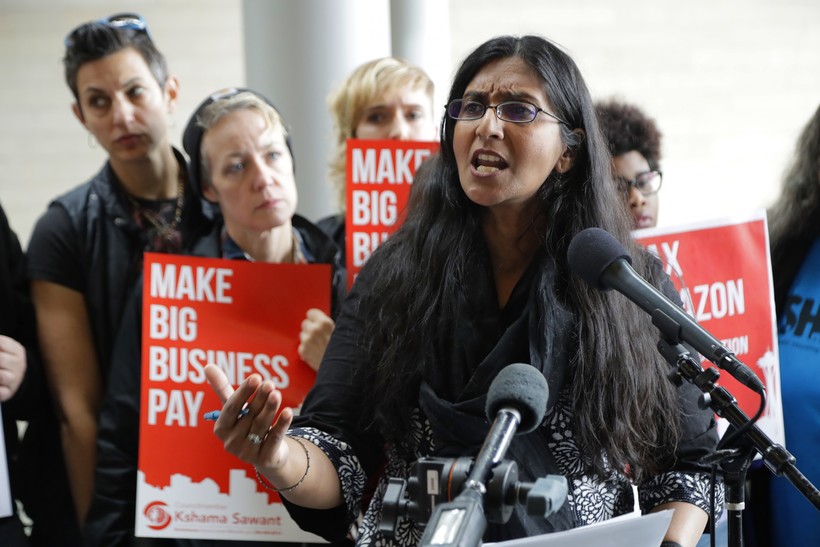 Councilwoman Kshama Sawant On How Socialism Won In Seattle

Sawant Is First Socialist To Win Election In Seattle In Nearly A Century
By Shannon Henry Kleiber
Share:

It’s been a long time since Americans seriously debated socialism. Like it or not, socialism is now making a comeback.

In New York, Alexandria Ocasio-Cortez came out of nowhere to steam-roll an incumbent. Socialist-backed women — Sara Innamorato and Summer Lee — won big victories in Pennsylvania. And for the first time in a long time, membership in the Democratic Socialists of America is surging.

In 2013, Seattle City Councilwoman Kshama Sawant became the first socialist to win an election there in almost a century and she’s now in her second term. Her socialist platform included fighting for — and winning — a $15 minimum wage, and a tax on the wealthy. She takes an average city worker’s salary and donates the rest to a social justice fund.

"To The Best of Our Knowledge" host Anne Strainchamps spoke to Sawant about why she thinks socialism is resonating with Americans today.

Kshwama Sawant: The establishment, both the political establishment and the big business establishment, in some ways have been completely out of touch with the complete social crisis that the capitalist system is in. You see young people radicalizing around the question of poverty and inequality, even though the wealth in human society is increasing. People are asking this question: "How can this be?"

KS: I think it is a solid confirmation of something that socialist alternatives and some other organizations had been saying for several years, that actually calling yourself a socialist is not a barrier anymore for the new generation. It's not the "s" word anymore.

And actually it's the "c" word — the capitalism word — that working people, especially young people, are thinking about because they're recognizing that the world as it is presented to them is not working, and that they need to fight for a different society. When we first ran and won, it took the establishment by surprise, but then they immediately wanted to write it off. They said, "Oh, that's a one-off. That's Seattle." Anything can happen in Seattle, it's this rainy lefty city where people wear socks with their sandals. But you're seeing a nationwide shift happening now. That tells us something.

Why So Many Of Grassroots Socialist Candidates Are Women

KS: Asserting oneself as a woman or as a person of color or as a member of the LGBT community or as an immigrant is extremely important, especially given the absolutely horrendous attacks by Trump and the right wing and the Republican Party. That is actually playing a role in energizing and activating women and other people of other communities that face specific oppressions.

I think what you will see in the next year is people of all identities running on platforms that unite working people.

KS: I think if you are to do something to fight for justice, it implies by definition taking a side. So, I'm fully aware that I am a polarizing figure, but I don't see it as a personalized issue. Society is polarized.

You can’t do what (liberal elected officials and those in the Democratic Party) say they do, which is please both sides. Keep the chamber of commerce happy, keep the Amazon lobbyists happy, and yet win victories for working people that will transform their lives and also empower them politically. Any politician who says that is lying.

KS: It’s a question of whom you are building a coalition with, and on what basis. So if you are talking about the Democratic establishment having a bipartisan approach to the Republican Party to help the Republican Party strip labor law and make compromises which end up hurting the immigrant community — no, that is not the kind of bipartisanship I'm talking about. That's a sellout.

Some Advice For Up And Coming Socialist Candidates

KS: These politicians, as long as they are tied to corporate interests, they are going to betray you, when push comes to shove. Amazon flexed its muscles just a tiny bit, and then they all capitulated like dominoes.

I would say you should not tie yourself to what's acceptable to the establishment. They are tied at the hip to Wall Street interests. You have to turn outward, and build movements because you don't win anything if you don't. If you base yourself on trying to win some sort of consensus from above, from up there, it won't work.