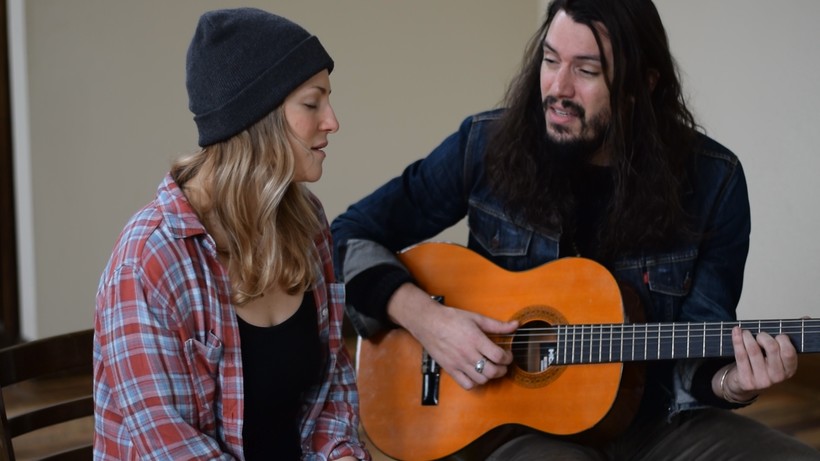 Musicians Adriel Denae and Cory Chisel perform in the chapel of the Refuge, a former monastery in Appleton that they converted into a retreat for artists. Karl Christenson/WPR

On the song, "Times Won’t Change," Cory Chisel laments how the world we live in doesn’t seem to get better for the people who really need it.

"Lots of people holding on to promises they should have won," he sings. But rather than speaking to those who hold public office, Chisel said, "this song is really more of a call to each other than it is to any politician."

Chisel was in WPR’s studio, along with his partner Adriel Denae, for an interview and performance with Stephanie Elkins in July 2012. During the interview, he did a stripped-down, acoustic version of "Times Won’t Change," which is the latest "Simply Folk" download song. Chisel originally released the song that same year with his group, the Wandering Sons on their album "Old Believers."

Though the song was recorded eight years ago, the divisions in Wisconsin then mirror the divide in the United States now, where sometimes even the facts and reality of a situation are under dispute.

"And I’ll agree to disagree when you can see the damage done," Chisel sings in the song’s bridge.

When asked about the song, Chisel remarked, "I'm not intensely political, mostly because I don't really believe in politics all that much as being the real force that causes any sort of change. I think it's the collective consciousness that really decides more of the way things are about to be than any politician. So, I think it's not always wise to attack the people that I think are in some ways just moving on the will of the people."

Chisel grew up in the Iron Range of Minnesota as well as Appleton, Wisconsin. Still living in Wisconsin, he helped start the Mile of Music Festival in Appleton, converted a monastery in the Appleton area into a creative space for artists called the Refuge, toured with Norah Jones, and received a Grammy nomination in 2016 for co-writing the song "The Traveling Kind," along with Rodney Crowell and Emmylou Harris.

That may seem like a lot for someone in their late 30s, but Chisel’s been touring and performing since he was 16 years old. Despite some people only learning of him with his Grammy nomination, Chisel has been working at this for decades, saying his career’s been "a lot of slow building, to be honest. And I think it's fitting of the area that we come from, that it’d be sort of a steady workaday climb."

He added, "Sometimes it takes 10 years to be an overnight still struggling success."