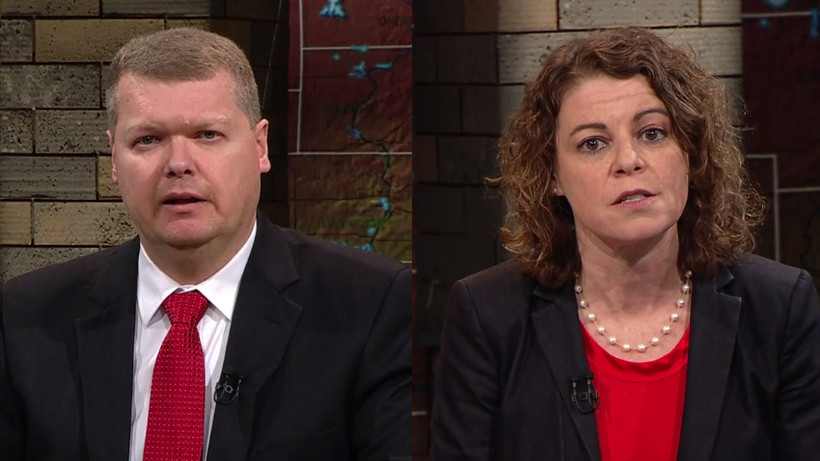 For Contentious Supreme Court Race, Stage Was Set A Decade Ago

This year's Wisconsin Supreme Court race has been more overtly partisan than any in recent memory, but it reflects an evolution of judicial campaigns that began in earnest with another judicial contest a decade ago.

In 2008, former state Supreme Court Justice Louis Butler was the candidate favored by Democrats. He was running during a two-year Democratic wave that saw Democrats win up and down the ballot from the White House to the state Legislature.

An incumbent justice had not lost in Wisconsin in more than 40 years.

And yet Butler was defeated that year by now-Justice Michael Gableman, providing a new template for how to win and lose Supreme Court races in Wisconsin.

"It was absolutely transformative," said University of Wisconsin-Madison politics and law professor Howard Schweber. "2008 marks the beginning of the conversion of Wisconsin judicial politics to just an extension of partisan politics by other means."

Wisconsin had already seen a glimpse at the new world of judicial politics in 2007 when conservative Justice Annette Ziegler defeated Madison attorney Linda Clifford in a campaign that was both expensive and negative.

But the 2008 election between Butler and Gableman could not have provided a sharper contrast in styles between two candidates.

Butler had been appointed by Democratic Gov. Jim Doyle in 2004, but in speeches and debates, he avoided saying political things.

"I think it is inappropriate for a judge or a justice to tell you that I'm a conservative or a liberal or I'm a candidate of big business or law enforcement or labor or whoever," Butler said during a 2008 debate with Gableman just days before their election. "Because you're trying to send a signal that if you vote with me, I'll vote with you, and that's not what the justice system is all about."

At a time when outside groups on the right and the left were heavily involved the race, Butler asked them all to take their TV ads off the air.

"We wish that all independent groups would stand down, stand aside, and let the people hear from us, the candidates," Butler said.

Butler's answers to questions were precise, and sometimes technical, like when he was asked about campaign donations to justices.

"The rule is that 60.06(4) that talks about how elections are run," Butler told a live studio audience for their debate while members of the public watched on at home.

His answers were vague, and nearly every time he spoke, Gableman found a way to hit tried-and-true conservative talking points for judicial campaigns.

"I am a judicial conservative. My opponent has been legislating from the bench," Gableman said at one point during the debate.

"They have a choice between me and my opponent a judicial activist," he said at another.

It continued during an open discussion when Butler pressed Gabeleman on how he would have decided a case differently.

"I think the larger question is why is it that you have been engaged in a clear and consistent pattern of judicial activism," Gableman responded.

Arguably the most negative ad of the entire campaign cycle came not from an outside group, but from Gableman himself, where attacked Butler for defending a rapist named Ruben Lee Mitchell.

"Butler found a loophole," the ad's narrator said. "Mitchell went on to molest another child."

While Mitchell did commit another rape, it happened 20 years after he'd been represented by Butler, and after he'd served his time for the first crime.

Wisconsin's Judicial Commission would later file a complaint that Gableman's ad had violated the state's judicial ethics code by lying.

But during his 2008 debate with Butler, Gableman stood by the ad, saying "the primary purpose of the ad was fulfilled."

"The fact is that I spent my former career as a prosecutor," Gableman said. "The fact also is that in his former career, my opponent was a longstanding criminal defense attorney."

Gableman won 51 percent of the vote that April, defeating Butler by just 22,303 votes.

Schweber said Butler had run an "old school" race, and come up short.

"From the Gableman cycle and for several cycles thereafter, the Democrats were very slow to catch on," Schweber said.

Gableman is not running for re-election this year, but the conservative candidate seeking to fill his seat, Sauk County Judge Michael Screnock, is hitting similar notes.

"I know the dangers of a court legislating from the bench," said Screnock at a Supreme Court debate, Friday "Judges are not legislators, and neither are we executives."

But unlike in 2008, the candidate favored by Democrats, Milwaukee County Judge Rebecca Dallet, is finding ways to hit back.

Dallet has also been willing to identify with Democrats, speaking at their state convention, marching for gun control, and receiving endorsements from big names like former Vice President Joe Biden.

Former state Supreme Court Justice Janine Geske said it's probably a calculation by Dallet or people who support her, that they want to reach Democratic voters who would normally stay home in low-turnout races for Supreme Court.

"They think it's critical to get that Democratic base geared up and involved in this race," Geske said.

During a recent San Francisco fundraiser, Dallet talked about how Democrats had a chance to defeat U.S. House Speaker Paul Ryan or Gov. Scott Walker, telling audience members that their values were "Wisconsin values that had been lost along the way."

Screnock has seized on that.

"As I've been traveling the state since then, people have come up to me and said 'San Francisco values are not my values,'" Screnock said.

But Screnock's campaign has also evolved from the one Gableman ran in 2008.

Wisconsin Manufacturers and Commerce is running ads on his behalf, as it did for Gableman a decade ago. The liberal Greater Wisconsin Committee and a group run by former U.S. Attorney General Eric Holder have run ads supporting Dallet.

The difference this year is that Screnock has also received more than $300,000 from the Republican Party of Wisconsin, which is a first in the state's officially nonpartisan judicial elections.

Those donations have helped Republicans pay for ads like a direct mail flyer featuring a picture of Screnock and Gov. Scott Walker.

Dallet has charged that those donations and others will make it impossible for Screnock to be independent on the bench.

"People don't just give money away. They have an expectation," Dallet said. "I think the people in our state understand that. That there is some investment that these groups are making in you in order to get you on the court so that you'll do their bidding."

After Gableman won his race a decade ago, he went on to write landmark opinions like one that upheld Walker's Act 10 and another that shut down an investigation into Walker's campaign.

Whoever wins Tuesday's election will have the opportunity to serve until at least 2028, giving them the chance to write the landmark rulings of the next decade.